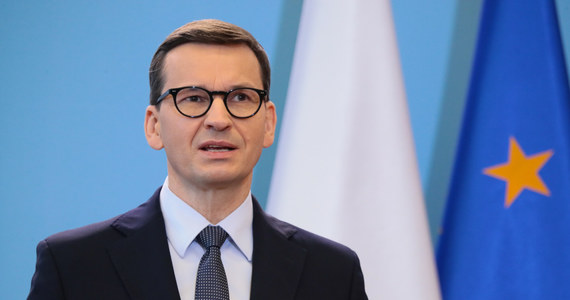 Morawiecki in Paris: on the situation on the border with Belarus

After the meeting on Tuesday in Paris with the President of France, the head of government emphasized that he wanted to present “a certain program of coherent activities that could be continued by the Slovenian and later the French presidency”.

The prime minister reported that during the conversation with Macron, he spoke of fears related to “several phenomena occurring simultaneously today”, which – he added – commented extensively with the president of France. – And, what is important, the president emphasized several times that that we have a very similar view of these risks, the phenomena that take place around us – said Morawiecki.

The prime minister also talked about assembling Russian military units around Ukraine and about gas blackmail, leading to higher gas prices throughout Europe. He reported that he spoke with Macron also about Fr. “a special Russian weapon, unfortunately, is propaganda (…) hacker attacks, cybercrime”.

– All these actions should meet with one answer – this answer is the solidarity approach of the entire EU. I am glad that I see this approach of solidarity during my talks, which are a continuation of our diplomatic offensive, so to speak, a few weeks ago, he said.

At the conference after the meeting with Macron, Morawiecki was asked if there were plans to strengthen the forces on the Polish-Belarusian border, possibly using the help of the Czechswho offered to send their soldiers.

The prime minister said that a few days ago he had the opportunity to review the border posts and the level of mobilization, organization and motivation of Polish officers was very high. – This does not mean that in a situation when this pressure will continue to stiffen, it will be more and more, we will not have to support our soldiers with our additional units – said Morawiecki.

He added that we still have quite a lot of these units in reserve.

– I thank all European leaders who are also ready to support Poland, it is a clear sign of solidarity and support for our borders (…). We accept this readiness to help with gratitude, but first of all, I point out the need to build this physical barrier, border infrastructure, which will be able to protect us against the uncontrolled inflow of new migrants – emphasized the head of the government.

He expressed the conviction that this dam on the Polish-Belarusian border would be built by next summer.

Morawiecki said that he saw a solidarity with the interlocutors during diplomatic actions and international meetings on the crisis on the border. According to the prime minister, “all these actions have already brought some results”. – Well, the influx of new immigrants has almost stopped. At the same time, there have already been some transports from Belarus back to the country of origin of these migrants. All this together gives some cautious optimism – said Mateusz Morawiecki.

However, he made a reservation that “These are just the little first primroses.” – Which do not yet prove that Lukashenka’s regime has forgiven. We must be very determined in our actions and show that we will not yield to this pressure, added the Prime Minister. As he underlined, this is not an ordinary migration pressure. – This is a political crisis caused by the use of these innocent people from the Middle East used by Lukashenka as human shields – the prime minister stressed.

He also emphasized that in defending the territory of Poland and the EU, we should show empathy. – And we do it. We save those who crossed our border, got lost in our forests in eastern Poland. We take a lot of people to hospitals, a lot of people are in transition centers, but also many people decide to return to their countries of origin – he added.

Witek in the “Gościa Wydarzeń” online play-off about the president’s abortion project: I think the Sejm will consider it
Polsat News

Videogames entered his life in the late '80s, at the time of the first meeting with Super Mario Bros, and even today they make it a permanent part, after almost 30 years. Pros and defects: he manages to finish Super Mario Bros in less than 5 minutes but he has never finished Final Fight with a credit ... he's still trying.
Previous Legia takes another blow. Without the two pillars at Leicester Pika none
Next MEGA FINAL Black Friday 2021