The signing ceremony of the treaties on the annexation of new territories to Russia will be held tomorrow at 3 pm local time in the Kremlin and will be attended by the head of state Vladimir Putin. This was stated by the spokesman of the Kremlin Dmitry Peskov, as reported by Ria Novosti.

“Tomorrow at 3.00 pm (2 pm in Italy) in the Grand Palace of the Kremlin, in the Sala di San Giorgio, a ceremony will be held to sign the agreements on the entry of all 4 new Ukrainian territories in which the referendum in the Federation was held Russian. In this event there will be a full speech by President Putin, “Peskov said.

“We do not accept farce referendums and we will never accept any annexation of the occupied Ukrainian territories”. This was reiterated by the spokesman of the EU Commission Dana Spinant following the announcement by Moscow of the annexation, tomorrow, of the occupied territories of the Donbass. 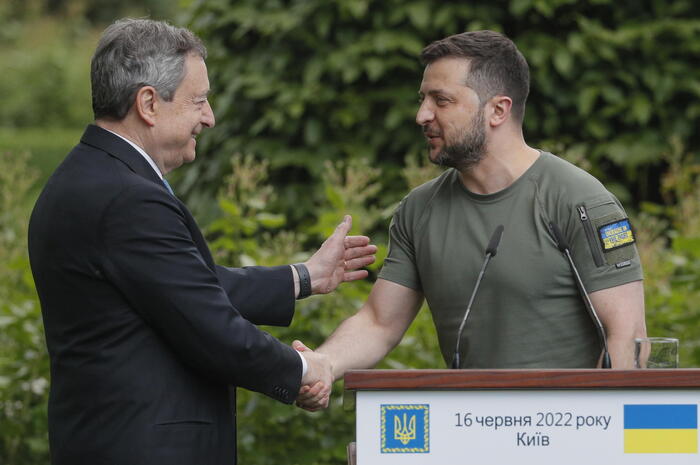 Phone call between the Prime Minister and the Ukrainian leader, ‘support in all areas’ (ANSA)

“If the new sanctions package” against Moscow proposed by the EU “includes restrictive measures on energy, Hungary will not support it”. Thus the minister of the presidency of the Hungarian Council of Ministers, Gergely Gulyas, at a press conference.

Finland has decided to close the borders to Russian ‘tourists’ starting from the night between Thursday and Friday. This was stated by the Finnish daily Helsingin Sanomat which announces a government press conference for today to explain the new rules for the entry of Russians to the border with the aim, writes the newspaper, “of reducing the arrival of Russians in Finland until half of the current level “.

The Finnish government has confirmed the closure of the eastern border starting at midnight. Since then, Russian citizens will only be able to enter Finland for some particular and proven reasons, such as visits to relatives, for work or to receive medical treatment. Finnish interior minister Krista Mikkonen said “all entry requests will be considered individually” adding that anyone who wants “can apply for asylum or try to cross the border illegally. But we are prepared,” the minister told the minister. public broadcaster Yle.

Russian missiles hit a residential area in the eastern city of Dnipro in the night: three civilians, including a child, were killed, five wounded.
This was announced by the head of the Dnipropetrovsk regional military administration Valenyn Reznichenko, quoted by Ukrinform. “The Russians hit Dnipro with missiles in the night, targeting residential areas. At the moment, three civilians have been reported killed, including a child. Five have been injured, including a 12-year-old girl,” Reznichenko wrote. “Rescuers are clearing the rubble where other people may be.”

“Dozens” of refugees fleeing the Kharkiv region were killed in the bombing of their convoy by Ukrainian forces, according to Rodion MIroshnik, head of the representative office of the self-proclaimed Republic of Lugansk. This was reported by the Russian agency Ria Novosti.

There are also 18 Himars rocket launchers with related ammunition in the new $ 1.1 billion US military aid package in Kiev. The Pentagon reported this, however explaining that the Himars are part of long-term defensive needs and will be delivered in a few years. In fact, Washington will buy them from producers, it will not take them from its own arsenals, as it has done so far.

Videogames entered his life in the late '80s, at the time of the first meeting with Super Mario Bros, and even today they make it a permanent part, after almost 30 years. Pros and defects: he manages to finish Super Mario Bros in less than 5 minutes but he has never finished Final Fight with a credit ... he's still trying.
Previous Accusations of Corruption, Secrets in USB Flash Drives and a Man Jailed for Knowing Too Much: The Investigation That Makes Al-Khelaïfi Shiver | First page
Next the transformation of the actress in the Netflix movie