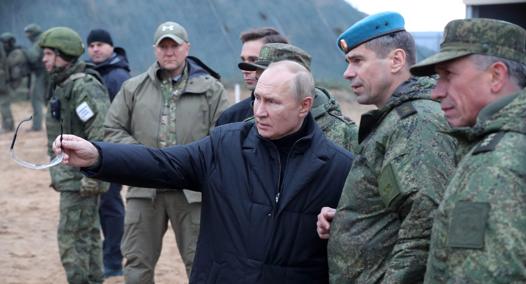 Moscow, from tomorrow the exercises with the nuclear forces: the “strategy of attention” – Corriere.it

Missile test possible. A researcher arrested in Norway: he claimed to be Brazilian, investigators suspect he is a Russian spy. Throughout Europe, investigations have been intensified to discover agents mobilized from Moscow

Russia continues with the strategy of attention. In the last few hours he has alternated raids and effective declarations, however he wants to keep the initiative public. Hence the references to the “dirty bomb”, the ever threatening tones, the accusations.

And they are expected between 26 and 29 exercises along the Kola Peninsula with the participation of strategic nuclear forces, including attack submarines. During the maneuvers – announced for some time – missiles may be tested.

Observers wonder what kind of provocation or step they want to implement. Diplomacy argues that the Kremlin is betting on the “fatigue” of the West where political forces of various tendencies move, unconvinced of an all-out support in favor of Kiev. Because the cost goes up.

Volodymyr Zelensky addressed donors on Tuesday asking for help to cover the $ 38 billion deficit expected for next year. The president also explained that a third of the national energy system was destroyed by bombing. Government officials pointed out how strikes are designed to create damage in depth«They know what and how to hit, they must be advised by technicians»: to reactivate certain systems it will take months and months.

In Norway, the alarm is always high. Police arrested a researcher in the Arctic city of Tromsoe: he claimed to be Brazilian but investigators suspect he is a Russian spy. Arriving in 2021, he acted under a false identity to collect confidential information. The details recall the story of the fake Brazilian who had tried to settle in Holland using a hardly credible story, learned by heart. They caught him immediately and rejected him. The Tromsoe operation follows the arrest of two other Russians, a man and a woman located in a car near a barracks near Bjerkvik, in the north of the country. In recent days there had been similar interventions by agents against Russian citizens who were then released. They had taken photos in forbidden areas. Close vigilance is related to contrast of “observers” interested in sensitive infrastructures, military installations, located in a strategic region for NATO. Equally high is the fear of sabotage. Throughout Western Europe, investigations have been intensified to discover the agents mobilized by Moscow, with dozens of expulsions decided by EU governments. Many operated under the traditional diplomatic cover, a presence parallel to that of the “illegals”, real infiltrators, trained to act in hiding. Some were probably related to Gru’s Unit 29155, the military secret service.

New details emerge from the ground about the Iranian drones used by the invaders. Intelligence, analyzing components of downed aircraft, found confirmation: Austrian-made Rotax engines are used on the Mohajer 6, considered among the best. In theory, these are components that could not be sold in Tehran but we know that there are many ways to circumvent the embargo. Meanwhile, the ayatollahs are about to send new drones and instructors. Added to these are thousands of helmets and bulletproof vests. Is it possible that Russian industry is unable to meet the demand of the Army? No less surprising is the line taken by the Islamic Republic. Foreign Minister Hossein Amirabdollahian has it back denied that there is assistance in favor of Russia and offered the possibility of establishing talks with Kiev on this issue. Message also extended to the European Union.

The United States is considering to provide Ukraine with old (updated) Hawk anti-aircraft systems to help face the incursions of the enemy. Spain has already done this. The Pentagon should have a lot of them on deposit, same thing for other countries. Batteries can help defend against cruises, drones, and fighters. Resistance must extend its shield. This conflict, moreover, has shown that “nothing is thrown away”.

Videogames entered his life in the late '80s, at the time of the first meeting with Super Mario Bros, and even today they make it a permanent part, after almost 30 years. Pros and defects: he manages to finish Super Mario Bros in less than 5 minutes but he has never finished Final Fight with a credit ... he's still trying.
Previous “We haven’t seen the real Osimhen yet! Spalletti wants something from Victor”
Next Jessica Chastain and Anne Hathaway want to redo Death makes you beautiful