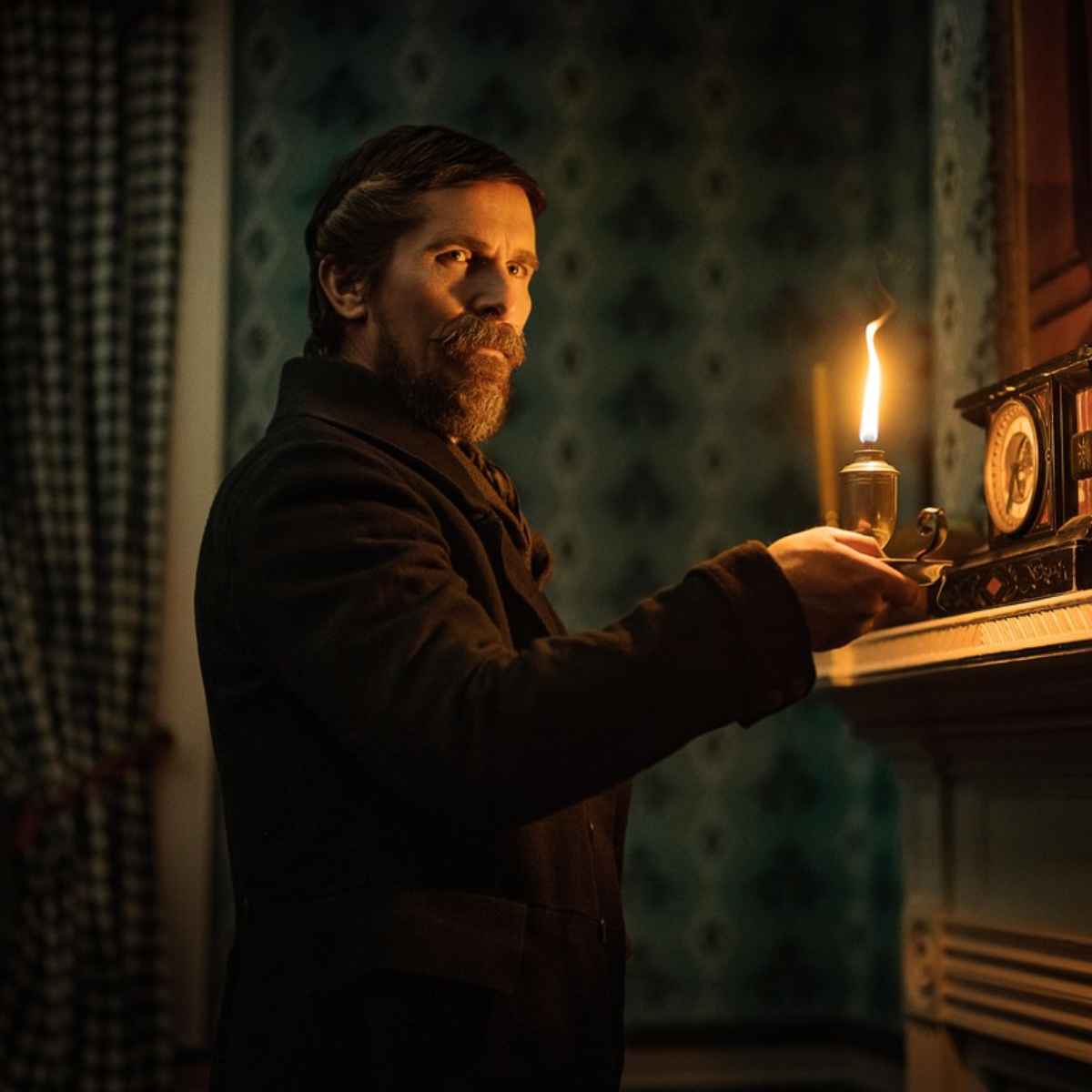 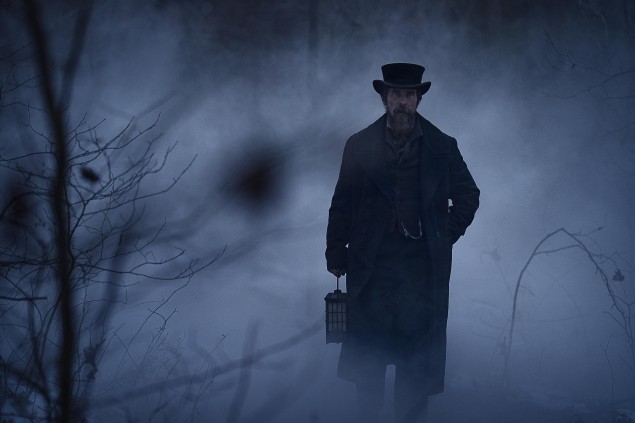 The Pale Blue Eye – The West Point Murders with Christian Bale (exclusively on Netflix from January 6) is among the most interesting films visible in streaming this month. Here are the titles not to be missed on the various platforms.

The New Year opens with a series of really interesting titles, both original films, never released in theaters (The Pale Blue Eye, If These Walls Could Sing, Hypersomnia, An Explosive Marriage), and among those seen on the big screen last season (The Menu, I eat your heart).
Here are the top movies you can’t miss in January on major streaming platforms: Netflix, Paramount+, Disney+, Prime Video, Sky and Now TV.

Pop films and arthouse films. Funny and other complex and disturbing works. Not forgetting that on RaiPlay a series of ten films by one of the greatest geniuses in the history of cinema is available, Charlie Chaplin!

Here is the best cinema visible on demand this month. Some titles are already available, others you will find soon. Happy New Year, also of streaming cinema.

Ten feature films written, directed and performed by Charlie Chaplin are already available on RaiPlay. From The brat to A king in New York. Above the Rai poster of the event, taken from a frame from Gold Rush.

From silent to sound, an unmissable collection of works restored by Cinematheque of Bologna.
Chaplin’s artistic genius is the most magical, poetic, wonderful, and timeless, the most vivid cinematic climax of the mixture of comic and tragic.

To understand how current and at the same time distant it is from the arid times we live in, it is enough to recall the monologue of the Jewish barber who The great dictator replaces the dictator Hinkel/Hitler. He says: «I don’t want to rule or conquer anyone. I would like to help everyone if it’s possible: Jews, Aryans, black and white men. All of us, human beings, should always help each other, we should only enjoy the happiness of our neighbor, not hate and despise each other…».

When the words “not to be missed” really regain meaning. 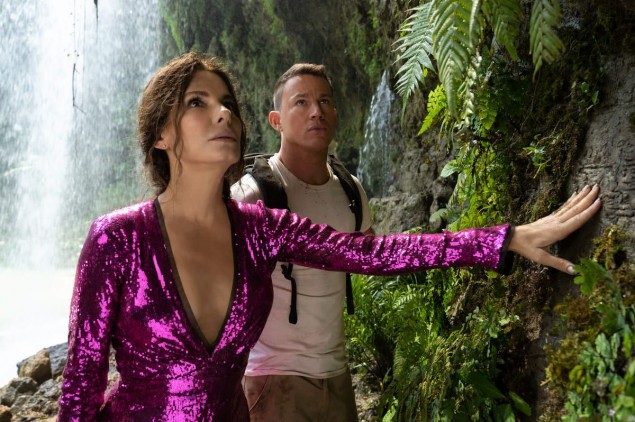 The adventures of Sandra Bullock and Channing Tatum (with two surprises)

On Paramount+, Sky and Now TV: The Lost City (2022) by Aaron Nee and Adam Nee (2022)
Loretta Sage (Sandra Bullock), widow of an archaeologist, is a successful writer. Her books mix romance, adventure and the search for hidden treasures. After yet another success, Loretta finds herself in a creative crisis. During the promotional tour of the book, she together with Alan (Channing Tatum), model of its covers, is kidnapped by the greedy Abigail Fairfax (Daniel Radcliffe). Abigail is in fact convinced that the woman is the only person capable of deciphering an ancient hieroglyph…

A little’ In pursuit of the green stone (the incipit is identical!), in part Indiana Jones and the Temple of Doom. Adventure, comic gags and a pair of sympathetic and antithetical heroes (Bullock and Tatum).
Nothing particularly original, therefore, but light-hearted and entertaining cinema with a good trio of absolutely new protagonists. In particular, quite surprising Daniel Radcliffe as the villain of the moment. With a cameo by Brad Pitt.

For those who love eighties action comedy updated with a contemporary feel and new technologies. 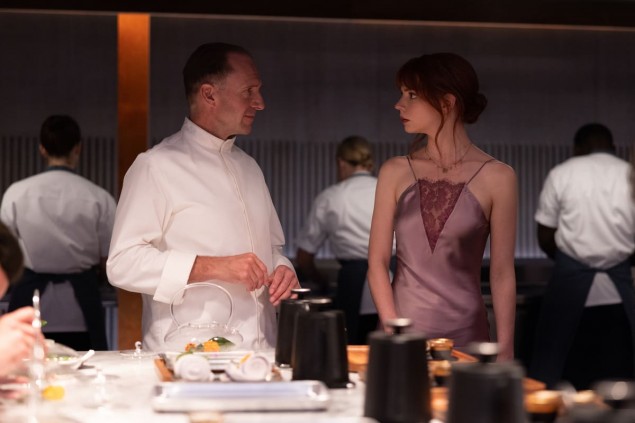 Ralph Fiennes and Anya Taylor-Joy in a scene from the black comedy The MenuJanuary 4 on Disney+.

Young Margot (very good Anya Taylor-Joy) and Tyler (Nicholas Hoult) go to a mysterious and remote island where there is an exclusive restaurant, The Hawthorne. Here the celebrated chef Slowik (remarkable Ralph Fiennes) has prepared a refined menu for refined palates. At least in appearance. A long series of disturbing surprises will follow. Nothing is as it seems, starting with the main characters…
Film at times a bit cumbersome, but the actors (all in part) compensate, with their skill, the sketchiness of the screenplay. The black humor is interesting and effective which, in a series of mouthfuls-sequences, makes a mockery of the contemporary culinary obsession.

Not recommended after (or during) meals.

On Netflix (from January 6): The Pale Blue Eye – The West Point Murders by Scott Cooper (2022)

West Point Academy, 1830. At dawn on a winter morning the corpse of a cadet is found hanged. However, the autopsy reveals that the boy’s heart was meticulously removed from his chest…
Detective Augustus Landor (Christian Bale) is hired to discreetly investigate the rookie’s heinous murder. He will have to contend with the code of silence among cadets suspicious that the man wants to tarnish the good name of the academy. However, Landor manages to win the trust of a young military man named Edgar Allen Poe (Harry Melling).

For lovers of crime mystery with a dark vein. From the novel by Louis Bayard, an investigation into a bygone era directed by Scott Cooper (Crazy Heart, the fire of vengeance).
Timothy Spall plays Superintendent Thayer, while Charlotte Gainsbourg is the charming Patsy.

On Disney+ (starting January 6): If These Walls Could Sing by Mary McCartney (2022)

If These Walls Could Singor “If these walls could sing”, is the documentary that retraces the legendary Abbey Road Record Studios. From classical to rock to pop, every musical genre was played in the Studios made – even iconographically – a legend thanks to the Beatles album Abbey Road (1969). Do you remember? The four musicians crossing the pedestrian crossing…

The director, Mary McCartneydaughter of Paul and Lindainterviews rock stars like his father, who particularly remember the Beatles era, but also other giants like Jimmy Page, Roger Waters, John Williams and Elton John. The latter observes: «When you enter a certain type of environment there is so much history inside… In some ways it is a sacred place. So many people want to come here, they want the sound of Abbey Road!” Among other contemporary rock stars also appear the Gallagher brothersOasis exes Liam and Noel, e Heavenly.

Turn the volume up all the way, mash play…

Right from the title, a story of violence and possessive love. Promontory of the Gargano, 1960. The Malatesta family is exterminated by the rival clan of the Campogrande. The only survivor is little Michele. Forty-four years later, we find Michele Malatesta (Thomas Spider), who over time took his revenge and killed all those responsible for the massacre of his family. He now lives with his wife Teresa (Lidia Vitale) and the children in a moment of apparent peace between the clans. When his son Andrew (Francesco Patane) falls in love with the beautiful Marilena Camporeale (Elodies), the hatred between the two families explodes again…

I eat your heart is inspired by the reportage of Carlo Bonini and Giuliano Foschini (ed. Feltrinelli), investigative book on the first repentant of the “fourth mafia”, Flower Rose (Marilena in the film).
It is a film of faces, bestiality (sometimes excessive), love (toxic) and crime.

Beautiful, good and credible singer Elodie in the role of Marilena. Over the credits she sings the single with Joan Thiele Bullets. 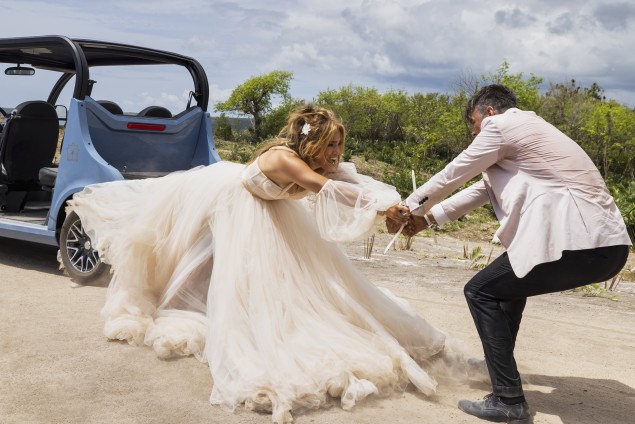 Darcy (Jennifer Lopez) and Toms (Josh Duhamel) are getting married. The woman is not very convinced of the wedding, also due to the intrusive and always inopportune mother-in-law (Jennifer Coolidge). Among other things, the bride’s ex-boyfriend Sean (played by the rock star) also shows up at the wedding Lenny Kravitz). Right at the threshold of the altar, in the exotic location chosen by the spouses, an armed commando of dangerous criminals appears and takes the married couple hostage…

Yellow-pink comedy directed by Jason Moorefamous director of the saga Pitch perfect.
J.Lo continues its rom-com journey with a more or less dysfunctional marriage taking center stage (Sooner or later I’m getting married, My monster mother-in-law, Marry Me – Marry me…). This time with the addition of action.

From the series “till death do us part”. Literally.

In the near future, the old dirty prisons, overcrowded and marked by daily violence, no longer exist. Prisoners serve their sentences in a state of deep sleep, called hypersleep. The system seems perfect, efficient and economical. One day, however, the psychologist David Damiani (Stephen Accorsi), who has the task of monitoring the mental state of the prisoners, discovers that all the data of a sleeping prisoner has been lost. The unexpected will lead David to confront traumas and ghosts of the past that seemed buried…

Premiered at the Turin Film Festival, Ipersonnia is a contemporary Italian fantasy-thriller directed by Albert Masciawith an unpublished Stefano Accorsi.

For those who love sci-fi cinema.

David Martin is the lead editor for Spark Chronicles. David has been working as a freelance journalist.
Previous Kate Moss with pink and straight hair, here is the new hair look!
Next The romantic drama movies on Netflix to watch absolutely