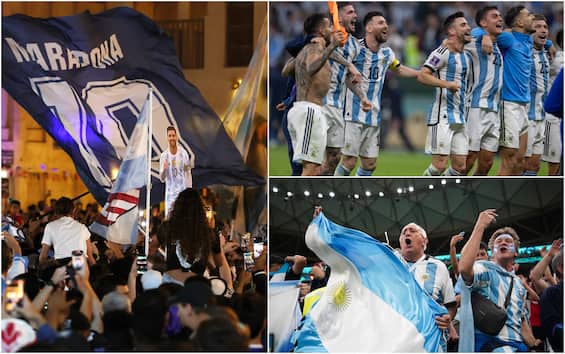 Muchachos, text and story of the song of the Argentine fans and catchphrase of the World Cup in Qatar

The chorus is an adaptation of the song “Muchachos, Esta Noche Me Emborracho”, by the Argentine ska group La Mosca Tse-Tse. It has turned into a kind of anthem of the Selecion in Qatar, inspired by the deeds of Maradona and Messi, with references also to the lost finals and the Falklands war

Each World Cup has its signature song. Give her “Magic Nights” that depopulated at Italia 90 on the soundtrack of South Africa 2010 with the notes of “Waka-Waka” by Shakira or the “Seven Nation Army” by the White Stripes, transformed by the Italian fans into the anthem of triumph in Germany in 2006. The 2022 World Cup in Qatar (SKY TG24 SPECIAL ON THE WORLD CUP – THE OFFICIAL SONGS) were accompanied above all by “Muchachos“, the chant of Argentine fans that resonates everywhere, from the stadiums to the streets of Doha to the Albiceleste dressing room. It is an adaptation of the song “Muchachos, Esta Noche Me Emborracho“, by the Argentine ska group La Mosca Tse-Tse, also famous in Italy with the success “Para no verte mas” of 1999. The song had long since become a stadium chant of the fans and then was transformed into a sort of unofficial anthem of the Selecion at the World Cup, inspired by the deeds of Maradona and Messi, with references also to the lost finals and the war of the Falklands (CUP FINALS: ALL LIVE UPDATES – WHERE TO SEE IT – WHAT TO KNOW – THE MESSI-MBAPPE CLASH).

What the song says

“I was born in Argentina, land of Diego and Lionel. Boys from Malvinas that I will never forget”, reads the first verse. Diego Armando Maradona and Lionel Messi are the nation’s two footballing idols while the reference to “los pibes de Malvinas”, refers to the Argentine soldiers who died in the Falklands conflict (or Malvinas, as the islands are called in Argentina) in the early 1980s vs UK. Then there is the memory of crying over the lost finals (“I can’t explain it to you because you wouldn’t understand”) redeemed with the triumph at the Maracana in the 2021 Copa America against Brazil. Indeed, Argentina seemed unable to win a trophy after their Copa America success in 1993. Since then there have been painfully lost finals, including the one at the 2014 World Cup against Germany and the two against Chile in the Copa America in 2015 and 2016. But the curse was broken in 2021 when Albiceleste returned to winning ways, right in the Copa America, beating their eternal Brazilian rivals in the final. And so, the song continues, “Guys, now we have deluded ourselves again, I want to win the Terza, I want to be world champion. And we can see Diego from the sky, with Don Diego (his father) and with ToTa (his mother) who push Lionel.” Hence the memory of Maradona and his parents who cheer from above for Messi to lead Argentina to its third world title.

The text of the chorus


Qatar World Cup, everything you need to know about the final

“In Argentina he was born, land of Diego and Lionel / of the children of Malvinas that jamás olvidaré / I can’t explain it to you, because he didn’t go to understand / the finals we lost, cuántos años las lloré / But that’s why he ended up in the Maracaná / la final con los brazucas la volvió a ganar papá / Muchachos, ahora nos volvimos a ilusionar / quiero ganar la tercera, quiero ser champion mundial/ Y al Diego en el cielo lo podemos ver / con Don Diego y con la Tota, alentándolo a Lionel”

The text translated into Italian

“I was born in Argentina, the land of Diego and Lionel / of the Malvinas boys that I will never forget / I can’t explain it to you, because you wouldn’t understand / the finals we lost, how many years I cried for them / But it’s over because at the Maracana / Dad won the final with the Brazilians again / Guys, now we have deluded ourselves again / I want to win the third, I want to be world champion / And we can see Diego in heaven / with Don Diego and with La Tota, encouraging Lionel ”.

Qatar World Cup, clash between Messi and Mbappé in the final: the confrontation

Club mates in Paris Saint Germain, the two number 10s are the most awaited protagonists of the World Cup final between Argentina and France. They also come in pairs in the top scorer. From previous head-to-head matches to stats and sponsors, here are all the figures from the tournament’s stars

Sunday 18 December we play the 2022 World Cup final in Qatar. One between France and Argentina he will rise to the top of the world by winning the most coveted trophy for national teams. The challenge offers numerous ideas but will first of all be the duel between the numbers 10, Kylian Mbappe on the one hand and Lionel Messi on the other

In fact at Lusail Iconic Stadium a challenge will be staged between the player who has dominated world football in the last 15 years (together with Cristiano Ronaldo) and the one who has already established himself as the new phenomenon for some years now. Both come to the final act of the World Cup with similar numbers having scored 5 goals in 6 appearances. In the grand final, the title of top scorer of the tournament will also be played

Mbappé has already won a World Cup, in the last edition of 2018 in Russia. It would therefore be the second consecutive triumph for the young phenomenon. Leo Messi instead chases the cup which he has always missed and would be the culmination of an already legendary career. The Argentine captain came close in 2014 when in the tournament in Brazil he lost in the final against Germany

David Martin is the lead editor for Spark Chronicles. David has been working as a freelance journalist.
Previous THE SON by Florian Zeller – Trailer
Next 10 films to watch at Christmas on Netflix: from worst to best