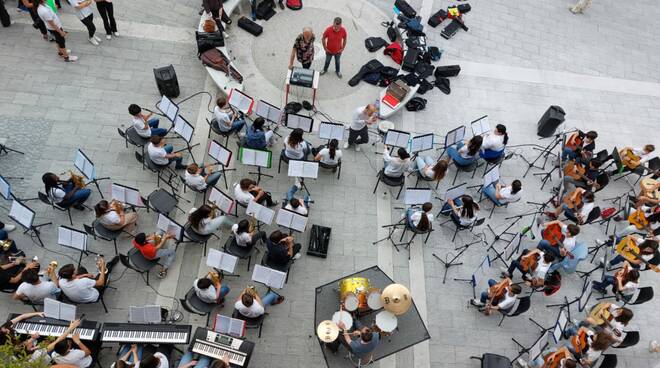 MutaMenti, fluid spaces of a jazz without borders

Pre-Christmas version, that of the second session of the Festival MutaMenti, fluid spaces of a jazz without frontiers, which completes the cycle of 16 stages of the traveling exhibition now in its sixth edition and entrusted to the precious artistic direction of Max De Aloe.

MutaMenti, associated with the national I-Jazz network, which unites the main Italian jazz festivals, is created by the Castelli Valorization Institute together with its members (the Province of Massa-Carrara and the Municipalities of Massa, Carrara, Montignoso, Pontremoli, Aulla, Podenzana , Comano, Casola in Lunigiana, Fosdinovo, Licciana Nardi, Bagnone, Filattiera, Mulazzo, Tresana, Fivizzano, Villafranca in Lunigiana) and thanks to funding from the Tuscany Region, the Province of Massa-Carrara, the Municipality of Carrara, the Cassa di Savings from Carrara and numerous private sponsors (sponsor list at the bottom).

A colorful plot that unites the territory through the colored threads of the languages ​​of jazz, becoming part of an overall project to enhance the “Land of the Hundred Castles”. MutaMenti is a musical journey that leads to the discovery of wonderful places, art and culture of the entire Province of Massa-Carrara. It is a dialogue between music and other art forms. It is a sound and visual journey through space and time. MutaMenti is an idea, a goal of change, renewal and growth through music, art and culture.

The program of this second session, which will end on December 10, consists of six appointments involving the Municipalities of Aulla, Bagnone, Carrara, Licciana Nardi, Montignoso, Villafranca in Lunigiana.

The concerts follow one another in evocative scenarios, from castles to historic buildings, from theaters to research centres, and are accompanied by collateral events dedicated to the knowledge and enhancement of the territories through guided tours and food and wine tours.

The idea of jazz understood as music of contamination, experimentation and encounter, which has always been the stylistic code of MutaMenti, defines the artistic choices also of this winter programming. Thus the schedule is characterized once again to welcome diversified shows by overcoming the separation of genresnot only a distinctive element, but also an access key for heterogeneous audiences who, regardless of a predilection for traditional jazz, can find involvement and passion in the review.

From 3 to 10 December, on the stages of changeminds, international musicians alternate with a varied group of established artists of the national jazz scene. Do not miss the promotion of new talent. In favoring generational turnover, the program has always provided for creative development paths for the new generations and the presence in the schedule of emerging groups and young talents.

The review opens on 3 December at the Castello di Pontebosio, in the municipality of Licciana Nardi with LUCA CIARLA and its MEDITERRAMÌA. The violinist, who has just returned from a tour in the United States, traces a new musical route in the Mediterranean with a pedal loops, his voice and several toy instruments. In solo he performs the entire score of a band, playing the violin as well as a guitar, cello or percussion. In this imaginative musical world Luca sings, whistles, plays other instruments and adds new improvisations by presenting unusual arrangements of the Italian popular tradition, music from the Mediterranean basin and original compositions.

Tuesday 6 December MutaMenti moves to Costa, in the Municipality of Montignoso, with PERCUSSION ENSEMBLE AND VOCAL ENSEMBLE of the “Felice Palma” music high school in Massa. At the Campolonghi Research Center the energy and enthusiasm of the students of Liceo Musicale Palma will be expressed in a repertoire composed of pieces by Gershwin, Porter, Duke Ellington, Chick Corea and others, reinterpreted in the original arrangements for percussion ensemble and vocal ensemble.

Wednesday 7 December we return to Lunigiana, to Aulla, in the Sala delle Muse at Palazzo Centurione, with “MARTHA J. & CHEBAT PLAYS THE BEATLES” a special concert dedicated to the Fab Four. Singer Martha J. and the pianist Francesco Chebat offer their own personal reading of the great classics of the Liverpool quartet, with arrangements in a jazz key.

Thursday 8 December the Teatro Quartieri di Bagnone will host a Duo that certainly needs no introduction: JAVIER GIROTTO AND VINCE HUGGING. The saxophonist Javier Girottoborn in Argentina, but protagonist of Italian jazz since the nineties, and the rising star of the accordion Vince Hugging they propose a fascinating repertoire between jazz, soul and blues: an original music, a bridge between southern Italy and South America with neoclassical pieces, free improvisation, melancholy excerpts and expressive refinement that addresses both the soul and introspective thought.

Friday 9 December will be a special occasion not only to listen but also to talk about music. In the Salone Voltato, at the Ethnographic Museum of Lunigiana in Villafranca, it will be presented in national premiere THE HARMONIC THAT BREATHES of jazz, boxers and popsicles the book of Max DeAloe edited by Blonk and released on November 25th. Gianni Coscia in the afterword to the book writes: “In a kaleidoscope of encounters, images, characters, events, Max doesn’t tell about his life, but lets you participate in the emotions that have shaped his strong and unmistakable figure as a musician. (…) Louis Armstrong very wisely said that if you ask yourself what jazz is, you will never know. Well Max with this book does not explain what jazz is, but with the pleasant and valuable reading of him you will have understood many things and perhaps you will no longer ask yourself this question.

The festival is made up of a set of artistic, cultural and social activities that train young people and adults to know the places, support the development of responsible tourism, promote the protection of the socio-cultural identities of the small towns of Lunigiana and the Province of Massa-Carrara .

Thanks to the support of local organizations and businesses and collaborating with the museum, library, tourist, educational, advanced training and health systems, it is recognized as a virtuous path capable of activating shared and sustainable cultural, social and economic dynamics.

MutaMenti is an opportunity, through the project “Discover and Taste with MutaMenti” – made in collaboration with Sigeric, Farfalle in Cammino, AlterEco, Terre dei Malaspina and Staue Stele Museum System, local producers and the support of several Pro Loco of the territory-, to get to know the province of Massa-Carrara through itineraries tourist slow and sustainable way of discovering its territory. At each stage of the Festival, such as usually, a different “experience” is associated:

3 December VISIT TO THE VILLAGE OF LICCIANA NARDI

7 December TALKING ABOUT SAN CAPRASIO: THE MUSEUM, THE CHURCH AND THE TOMB – AULLA (MUSEUM OF SAN CAPRASIO)

December 8 VISIT TO THE ARCHIVE MUSEUM OF MEMORY OF BAGNONE

New for this 2022 edition are the appointments at the end of the concert with “HUNGRY FOR MUSIC”: moments of study, sharing and meeting with the protagonists of MutaMenti accompanied by tastings of the typical products that characterize the different places of the Festival.

Continuing the collaboration with Usl Toscana Nord Ovest for the “World Breastfeeding Week” a fundraising is also planned for the opening of Unicef ​​baby pit-stops in the provincial libraries.

In line with the various objectives of the 2030 Agenda, MutaMenti favors sustainability in various ways, is a resource for the well-being of people and communities, intervenes with its activities in protecting the cultural and natural heritage, involving peripheral areas and territories at risk of depopulation, promotes equal opportunities and inclusion.

For this 2022 edition, he collaborates with the Usl Toscana Nord Ovest company at #SAM2022 (world breastfeeding week) promoting, with the show on October 1, breastfeeding among the sustainable development strategies;

As in the previous year, the Festival applies sustainable consumption models, through the adoption of the Minimum Environmental Criteria (CAM) developed within the GreenFEST Project – Green Festivals and Events through Sustainable Tenders.

MutaMenti is also obtaining important recognition abroad: the Jazz World company, together with the Italian Cultural Institute in Hong Kong and the Italian Embassy, ​​will host three concerts by musicians from the Festival from 27 to 29 September 2023 and will finance the performance of a formation from Hong Kong on the occasion of the Italian review

David Martin is the lead editor for Spark Chronicles. David has been working as a freelance journalist.
Previous Iron Man 2 star Sam Rockwell is open about Justin Hammer appearing in Thunderbolts
Next Qatar 2022, all behind Vinicius and Mbappé: confirmations and disappointments of the second round