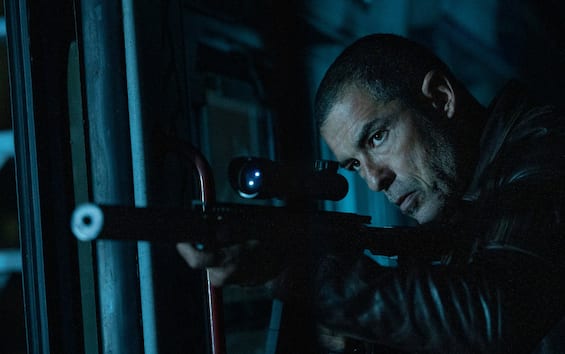 My name is revenge, the revenge film with Alessandro Gassmann on Netflix

The film has come out whose absolute protagonist is revenge, which in fact is also titled. Sofia (Ginevra Francesconi) is a hockey champion girl who, secretly photographing her father Santo (Alessandro Gassmann), will unknowingly start a domino effect of death and violence. The film was released in streaming on Netflix (also visible on Sky Q and via the app on the Now Smart Stick)

He’s out My name is revengethe revenge film with Alessandro Gassman that has just landed on Netflix (also visible on Sky Q and via the app on Now Smart Stick).
In this film the absolute protagonist is revenge, the one that in fact is also titled. In addition to “her”, there are Sofia (Ginevra Francesconi), who plays a hockey champion girl, and her father, Santo (Alessandro Gassmann). Her daughter will secretly photograph her father and post the photo on social media, unknowingly starting a domino effect of death and a trail of pure violence.
The teenager lives with her mother and father in the woods of Trentino and loves taking off-road driving lessons from her father Santo.
My name is revenge it is a tribute to many US films of the revenge genre, from which it takes up styles and themes.

This is Cosimo Gomez’s third directorial effort and tells a story that relies on perhaps the most human feeling that exists in the world. Unfortunately we talk about revenge, something that is certainly not a positive feeling but which, as history teaches us, animates humanity much more than pity and compassion, alas.

But how can a photo posted on Instagram trigger such a spiral of violence? The shot showing Santo published on the net will be intercepted by those who have been looking for him for twenty years, to make him pay an outstanding bill.
It is Don Angelo (Remo Girone), a clan leader whose eldest son was killed by Santo himself.
The mafioso will thus begin to leave an indelible trail of blood, in which the main victim is Santo’s wife (and Sofia’s mother), forcing the only survivors of this violence, father and daughter, to flee. She can’t digest such a heavy, criminal and dark past related to her father. She doesn’t give up, she doesn’t want to accept the fact that he was in the ranks of the ‘Ndrangheta. When she manages to metabolize this fact, a spring will snap in her: the desire to take revenge, together with him.

At the head of this article you can see the official trailer of the film Imy name is revenge.

My name is revenge, the trailer of the film with Alessandro Gassman

My name is revenge came out on Netflix yesterday, November 30th. It sees Alessandro Gassman in a new role for him, that of a hermit father in the woods behind which lies an unexpected ruthless avenger, who rises from the ashes of a former hitman in the pay of the ‘Ndrangheta.
“I killed about twenty people. And after a while I really got a taste for it”, Gassman enthuses in an interview released in these hours to the newspaper the Republic. “I enjoyed it so much that now I only want to make this kind of film.”

After the criminal organization of which he was once a hitman kills his wife, Santo will flee with his daughter. With her he will then give the her to their carnage to take revenge. Before moving into action, there is the usual training phase of a newbie, as so many films of the genre have taught us to expect.

Typical of products that can be counted in this cinematographic vein, My name is revenge follows the protagonists who start from an idyllic situation – in this case also characterized by the idyll of a quiet and unspoiled mountain landscape – to a situation far from all that, starting from the setting. The two protagonists will find themselves catapulted into an urban jungle, a location in which they don’t feel at ease, a wilder place than barren nature, where the rule “Kill or be killed, that’s the law”, a motto that draws inspiration from the novel – mentioned several times in the film – The call of the wild by Jack London.

Certainly another reference is the bob of the actress who plays her daughter Sofia: it is impossible not to see Mathilda’s face in it. Leonthe little girl played by a very young Natalie Portman in the masterpiece of the revenge genre, the film seasoned with hectoliters of blood and strange feelings directed in 1994 by Luc Besson, starring Jean Reno. In many features, then, the same character of Alessandro Gassman seems fairly modeled on that of Léon.

We will soon see Alessandro Gassman in various roles, given that various projects await him such as the fourth season of The bastards of Pizzofalconethe new film by Liliana Cavani The order of time (“There are some friends on holiday at the beach and it seems that a meteorite will hit the Earth: there are only three days left…”, the actor tells the Republic) and the directorial debut of Emilia Mazzacurati, daughter of Carlo, with Billy (“I’m a former rock singer who lives in the car: it’s great to work with twenty-somethings too, they have a completely different vision”, explains Gassman to the Republic).
But the actor had so much fun playing on this action set that it is likely that we will see him again in the role of such a character, an avenger who looks like something out of a video game or comic book. “Pure cinematic entertainment”, says Alessandro Gassman during the interview given to the newspaper the Republic.

“I did three months of training to get back in shape,” the actor explained to the newspaper. “And I worked with Emiliano Novelli, the film’s stunt coordinator: he has a state-of-the-art training center, internationally. Once the stunt departments in Italy came partly from the circus, partly were knights, swashbuckling, Italian-style, let’s say. Instead, now, also thanks to the TV series, we have very modern structures”.

The character played by Alessandro Gassman

Despite the name, Santo is far from being a saint. “In revenge films, the good is never totally good, it often comes from shit, in this case the ‘Ndrangheta. The underworld and corruption of this country offer many interesting stories. After all, the Americans made western films with savages who shot each other without law”, says the actor in reference to his multifaceted character animated by multiple feelings, from the bloodthirsty desire for revenge to the visceral love for his daughter. In this too he is very reminiscent of Leòn, who loves Mathilda with enormous tenderness as he kills the victims assigned to him with a startling coldness.

20 famous parents and children who acted together

From Ryan O’Neal and Tatum O’Neal, who in 1973 ‘Paper Moon’ brought the father and daughter couple of con artists to the cinema, to Will and Jaden Smith who more recently starred together in ‘The Pursuit of Happyness ‘ and ‘After Earth’. There are many actors and actresses who have shared the big screen with their heirs: here are 20 famous couples of parents and children from cinema

Even if we don’t really talk about cinema, we couldn’t not start this review with the couple Andie Macdowell And Margaret Qualleymother and daughter in real life and in the Netflix TV series maid, from 2021. Margert is Alex, a single mother who must find within herself the strength to face the myriad difficulties that life and US society place before her. Paula, the mother played by Macdowell, is a complex figure to relate to. The result is nothing short of exciting

The daughter of Susan Sarandon and the Italian director and screenwriter Franco Amurri, Eva Amurri Martino, has several film participations to his credit. Among these, however, one that he certainly remembers fondly is the one in the 2002 film The Banger Sisters – Two explosive friendswhere he shared the set with his mother, Lavinia Kingsley in the film, playing her daughter Ginger Kingsley

The relationship between father and daughter can be beautiful and at the same time very complicated. They know something John Voight And Angelina Jolietogether in the 2001 film Lara Croft: Tomb Raider. Angelina, among other things, has not missed an opportunity to “repeat history” with reversed parts: the little girl who lends her face to little Aurora in Maleficent (2014) is right on the daughter, Vivienne Jolie Pitt6 years old at the time

David Martin is the lead editor for Spark Chronicles. David has been working as a freelance journalist.
Previous Sunset Overdrive Free Download Full Game PC
Next Angelina Jolie will play Maria Callas in the upcoming biopic of Pablo Larraín