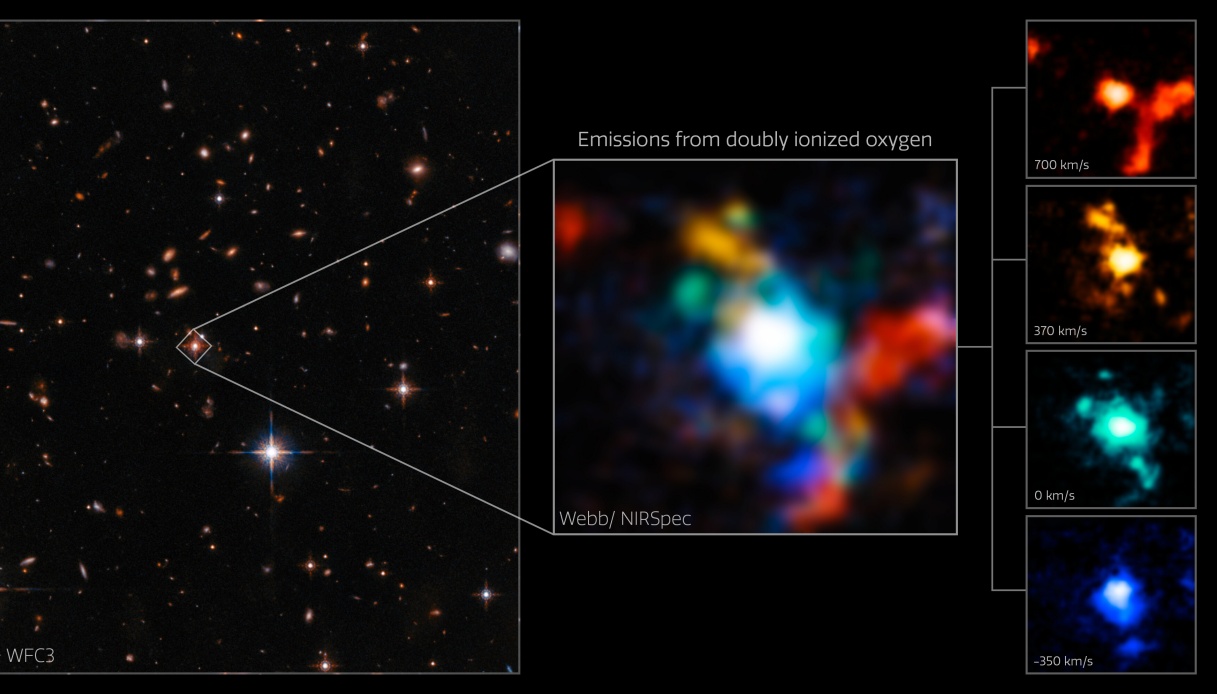 New cluster of galaxies in the sky

Thanks to James Webb space telescope we are pushing ourselves to the deepest part of the Universe. Unique and unedited images that led astronomers to a new and exceptional discovery: they noticed a luminous cluster of huge galaxies around a powerful quasar. And the study of him will tell us a lot about their formation in the early Universe.


Discovered a new luminous cluster in the sky

The discovery is surprising, but the James Webb space telescope in recent months is putting us in front of unpublished images that open the doors of our knowledge of the early Universe. We were able to ascertain this when, last April, he aimed his lens at objects so bright as to eclipse galaxies. And again with the epic image of the Pillars of Creation about 7,000 light years away from our Planet. Since it was launched into space on December 25, 2021, our view of the Universe has completely changed.

This time James Webb, thanks to its spectroscopic characteristics and its powerful infrared camera – the NIRCam (Near-Infrared Camera) – discovered the presence of a luminous cluster of enormous dimensions, which contains numerous inside galaxies forming around an “extremely red” quasar (SDSS J165202.64 + 172852.3). The quasar in question, whose formation dates back to about 11.5 billion years ago, had already been immortalized by the Hubble telescope but until now it had not been possible to see the activity around it in such precise detail.

The amazing images of the James Webb telescope

Quasars are known to be a very rare type of active galactic nucleus (AGN) placed at the center of a galaxy, capable of emitting electromagnetic radiation so powerful as to eclipse the surrounding stars. But the quasar in question, recorded by James Webb, has something special: it is, in fact, one of the most powerful galactic nuclei ever discovered at such an extreme distance.

The James Webb telescope was able to create truly unique images thanks to the NIRSpec (Near-InfraRed Spectrograph) with which it is equipped, a powerful tool that can simultaneously collect different spectra in the entire field of view of the telescope. It is a very specific technique, called IFU spectroscopy (Integral Field Unit), and it is precisely what allowed astronomers to examine the quasar, its galaxy and its surroundings at the same time.

In the past, some studies had already been conducted with images recorded by the NASA / ESA Hubble Space Telescope and by the spectrometer of the Gemini-North telescope, and some assumptions had already been made. Astronomers thought that the quasar’s host galaxy could merge with invisible space objects. Bad new and more detailed images by James Webb overturn this hypothesis: astronomers could not have known that around that quasar there is not only a galaxy, but at least three of them whirling around you.

“There are few known protoclusters of galaxies in this early period – said astronomer Dominika Wylezalek of the German University of Heidelberg, who conducted the study on this quasar -. It is difficult to find them and very few have had time to form from the Big Bang. This in the end it could help us understand how galaxies evolve in dense environments… It’s an exciting result “.

He likes dogs, pizza and popcorn. Already a fanboy of Nintendo and Sony, but today throws anything. He has collaborated on sites and magazines such as GameBlast, Nintendo World, Hero and Portal Pop, but today is dedicated exclusively to Spark Chronicles.
Previous Natural sleeping pills, the best products to fight insomnia
Next what it is and to whom it belongs