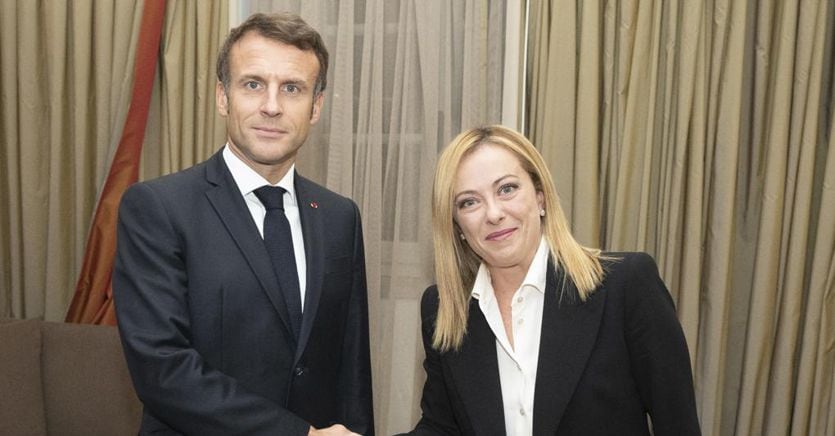 Emmanuel Macron and Giorgia Meloni go short. Evening meeting on a terrace overlooking San Pietro, to start a relationship that is necessarily strategic for both. It is for Paris given the (momentary) difficulty of relations with Berlin, consumed on the issues of energy and defense. So much so that the Franco-German council, the traditional engine of initiatives in Europe, has been postponed for now. It is for Meloni, who in Macron can have a fundamental role in the launch of the new government’s international relations, especially in light of attacks on France in the recent past – on the Quirinal Treaty and on the migrant dossier to name the main ones – which now appear in the background.

The economic activism of Paris and the alliance in military ships

The two sensitive fields of relations are in economics and foreign policy, above all. Italy often experiences French economic activism with annoyance, with prestigious acquisitions, especially in fashion, but also in the banking and financial field, even if the apex of tensions was reached in 2000 with the Edf takeover of Edison, and then years after Enel’s activism towards Suez, to then arrive at the “energy pax” between Prodi and Sarkozy at the 2007 Nice summit. It remains to be seen whether these deals could have had a different solution, but Italy also buys in France. Certainly the case of Fincantieri-Stx, agreements from the 2017 Lyon summit and then shipwrecked, is the demonstration of how economic nationalism remains a key element also in the Europe of the single market. However, it remains a fairly isolated case, so much so that in the military segment the Fincantieri-Naval Group alliance is fine and has been producing ships among the best for many years (above all the Fremm). And the historic and fruitful alliance in St Microeletronics should be remembered.

Sale of Ita, the expiry of the exclusive negotiation with Air France is near

Now perhaps the most delicate dossier is that relating to the sale of Ita, the airline to which the Mef (Draghi government) gave the consortium led by Certares and which includes Air France, KLM and Delta Airlines the exclusive right of the deal. cutting out Lufthansa-MSC, although the German one (according to experts) was the best option. The deadline for negotiations is October 31, and in the meantime the governance of Ita has entered chaos due to internal power struggles: certainly FdI did not agree with the sale decided by the Draghi government, and now we’ll see what happens. The other infinite dossier is the Turin-Lyon, whose section in Italian territory is at a standstill, and only the ancillary works are moving.

Above all, the main issue is the war in Ukraine and support for Kiev, in arms and aid. Macron is considered the only one in Europe who can bring some results towards Moscow, also given the objective weakness of Olaf Scholz. In addition to this, the strong theme is Mediterranean politics, with the migrant dossier. In 2017-2018 Italy asked for a revision of the Dublin Treaty, but no one agrees, including France, which gradually closed the Ventimiglia border, also causing diplomatic micro-crises which were quickly resolved, as well as the case of the visit of Minister Luigi Di Maio to the yellow vests, so as to provoke the temporary recall of the ambassador.

The Mediterranean and Libya

The other dossier is the Mediterranean, and in particular Libya, a country where two governments have been present for months – fighting each other – and which could progressively lead to a territorial split. France was close to General Haftar, so in the Cyrenaic Egypt-Emirates axis, also present Russia, Italy was initially more on Tripolitania, but does not close its doors. In reality, the Libyan game was almost completely ignored by previous governments, except for the diplomatic garrisons, and now we need a real resumption of initiative.

Videogames entered his life in the late '80s, at the time of the first meeting with Super Mario Bros, and even today they make it a permanent part, after almost 30 years. Pros and defects: he manages to finish Super Mario Bros in less than 5 minutes but he has never finished Final Fight with a credit ... he's still trying.
Previous Fiorentina-Inter, report and three-year-old Daspo to the man who attacked the Nerazzurri fan | First page
Next Bertrand Bonello shoots La Bête