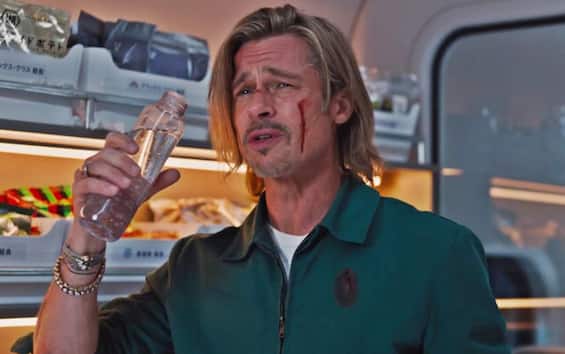 Sony has released a new video announcing what we will see in the upcoming action film starring Brad Pitt, Brian Tyree Henry and Sandra Bullock. The level of adrenaline is guaranteed by the name that signs the director: Leitch is the director of Deadpool 2, Fast and Furious Presents: Hobbs and Shaw and Atomic Blonde, so he really knows how to increase the heartbeat of the viewer

Sony has released a new video announcing what we will see in this tasty little gem, whose adrenaline level is guaranteed by the name that signs the director: Leitch is the director Deadpool 2, Fast and Furious Presents: Hobbs and Shaw And Atomic Blondeso if there’s one who really knows how to get their heart rate up, it’s David Leitch.

This second trailer already amply demonstrates this, which to define heart-pounding is an understatement … “Bullet Train” will be released in US theaters on August 5 and in Italian cinemas on August 25, 2022.

This highly anticipated action film from Sony is an adaptation of the novel of the same name by Kōtarō Isaka (the original Japanese title of which is “Maria Beetle”, named after the female lead).
In Leitch’s film, Sandra Bullock will step into the role of Maria Beetle. This is Ladybug’s mission overseer (played by Brad Pitt).
This new trailer offers just a new look at the character of Bullock, giving us several tasty new action sequences. It also includes several additional details, some of which we could almost define spoilers …

You can watch the new trailer for “Bullet Train” in the video you find at the top of this article.

Thriller, action but also a touch of comedy

This new trailer makes it clear that thrillers, action but also a lot of comedy are at the base of this film. A somewhat comical tone of voice is immediately revealed by the fact that it is Maria Beetle herself who gives the character of Brad Pitt the name of Ladybug (which in English means ladybug, symbol of luck).
The ironic implication is given by the fact that the character played by Pitt is far from lucky: he certainly had no luck at work, with a slew of accidents, despite himself; moreover, even the private sphere is no better, with a failed marriage and various situations that are certainly not happy, which brought him from Johannesburg to Bolivia.

A more in-depth trailer than the first

Unlike the first official video released by Sony, this new glimpse of “Bullet Train” reveals some rumors, such as the fact that Ladybug has already met some of the film’s killers.
These assassins become the protagonists of the trailer, in which we can take a closer look at the bad guys who are on board the train.
We thus discover that Ladybug had already met Wolf (played by Bad Bunny) at a wedding. He has sworn revenge to the protagonist, saying he intends never to stop chasing him. We also discover that Ladybug has already crossed the path of Tangerine (Taylor-Johnson) and also of Lemon (Brian Tyree Henry), met in Bolivia.
What this new trailer suggests is the fact that the killers try to team up, with the goal of being able to get out of that train’s trap alive. It seems that each of the killers has been assigned a specific task, linked to the mysterious briefcase that Ladybug must at all costs recover.

A video that reveals too much?

Although the trailer just released is spectacular and also very enjoyable, between action and comedy, on the net there are those who reflect on the fact that perhaps this trailer may have revealed too much of the plot of “Bullet Train”.
Another detail that the video suggests? That the Ladybug himself finds it difficult to get off the train, just like his enemies. This detail was not suggested by the first preview of the film.
Despite someone shouting at the spoiler, it could be a plan decided at the table by the production: “Bullet Train” could have so many aces up its sleeve and so intense twists that perhaps these details revealed by the trailer will then seem trifles when you can watch the full movie.

In the rich cast stand out the names of Joey King, Aaron Taylor-Johnson, Brian Tyree Henry, Andrew Koji, Hiroyuki Sanada, Michael Shannon and Benito A Martínez Ocasio, among others. Even if everyone’s eyes are on the magical trio of protagonists: Brad Pitt, Brian Tyree Henry and Sandra Bullock.

You can watch the new trailer for “Bullet Train” in the video you find at the top of this article.

Ad Astra, the cast of the film with Brad Pitt and Liv Tyler. PHOTO

Ad Astra is a science fiction film directed by James Gray, presented in competition at the 76th Venice Film Festival. The film tells the story of Roy McBride, a space engineer who crosses the Solar System to find his father who disappeared twenty years earlier during a mission. Ad Astra was nominated for the 2020 Oscars for Best Sound. Let’s see the cast of the film

Ruth Negga is the director of the space base, Helen Lantos

David Martin is the lead editor for Spark Chronicles. David has been working as a freelance journalist.
Previous Novi Ligure, Naples and Procida together in the name of the “Space that unites”. – The Gulf 24
Next Alok, Eminem and Chris Brown are among the releases of the week. Listen!