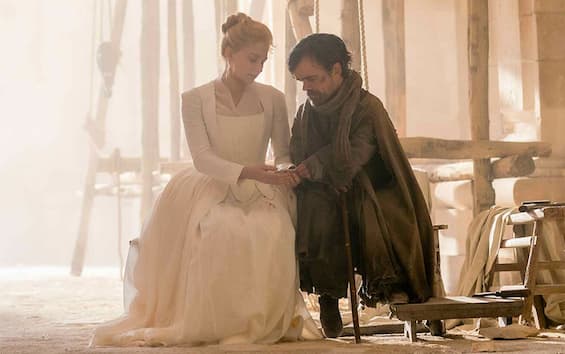 A new video has been released that anticipates what we will see in the highly anticipated film adaptation of the musical based on the comedy “Cyrano de Bergerac” by Edmond Rostand. The new clip is titled “Thrill” and has unconditional love as its main protagonist. Peter Dinklage, Haley Bennett and Kelvin Harrison are part of the love triangle of one of the most beautiful romantic and dramatic works in the history of literature. And now even more beautiful in the history of cinema

A new trailer for the musical film is out Cyranothe highly anticipated film adaptation of the musical based on the famous comedy Cyrano de Bergerac by Edmond Rostand.

To be the great protagonist of this video that anticipates what we will see in the film is unconditional love, in addition of course to the three exceptional actors who are part of the cast.

Peter Dinklage, Haley Bennett and Kelvin Harrison Jr. They make up the magical trio, a dramatic and love triangle that hypnotizes the viewer.
To make the recipe really succulent is the pathos, the heartache and romanticism that mix with the drama. Thanks also to the director Joe Wright, who manages to adapt the musical version signed by Erica Schmidt flawlessly for the big screen.

You can watch the new trailer of Cyrano in the video that you find above, at the head of this article.

Cyrano, the new Italian trailer of the musical by Joe Wright

To do the honors at Cyrano is a chapeau star performer: Peter Dinklage, the actor known to the general public for his role as Tyrion Lannister in Game of thrones.

Dinklage has already stepped into the role of Cyrano on stage, playing the title character in Erica Schmidt’s musical. Furthermore, the latter is his wife, which is why inserting him in the cast was not only a professional but also a personal fact… Not that this detail diminishes the cinematographic significance of his interpretation: Peter Dinklage is truly incredible in this part, as is in all parts of his rosy career.
The wide range of expressions that his Cyrano offers us is incredible. All expressions linked to a deep inner drama (caused by the fact that the woman he loves believes that the letters that arrive are not her work but the work of another), however every feeling that is written on Dinklage’s face is a straight jab to the heart of the viewer.

Furthermore, much of the palpable feeling of two of the protagonists, namely him and Haley Bennett, derives from the fact that also the character of Rossana (Roxanne in the original version) is interpreted in the film adaptation by the same actress who already acted together with Dinklage in the musical at the theater .

A work of extraordinary beauty

Cyrano, backstage video of the film with Peter Dinklage

We could define Cyrano a work of extraordinary beauty, although in truth the narrative fulcrum of what is narrated from the pages of Rostand actually depends on the ugliness: in the literary work, Cyrano is a man characterized by an enormous nose which makes him monstrous.

In both the stage musical and this adaptation for the big screen, Cyrano is no longer characterized by a large nose but by the famous actor suffering from achondroplasia, a pathology caused by a hereditary disorder for which Peter Dinklage is 135 centimeters tall.

This atypical height is for him the obstacle that does not allow him to declare his love for Rossana, hiding behind the words put in black on white on the written sheet of the many letters addressed to her on behalf of another.

In Cyrano there is a name to direct that in the seventh art is a guarantee of quality: the award-winning director Joe Wright (Anna Karenina, Pan – Journey to Neverland, Darkest Hour) manages to involve the audience with a magma of music, beauty, poetry and romanticism that overwhelms the spectators, in an emotional symphony from which no one can “save” themselves. Impossible not to be moved, we would bet…

The timeless story being told makes one’s heart flutter with a level of drama that could be worthy of Shakespeare.


Peter Dinklage, photos of Tyrion from Game of Thrones

That Cyrano de Bergerac who is played by Dinklage in the film is a wonderful character, very interesting in many respects, even as regards the physical aspect, let’s face it: that atypicality that connotes Dinklage’s physicality in no way detracts from the profound charm that this man manages to exercise, thanks to a truly unique expressiveness and an enviable charisma.

His puns are interesting and very engaging, those that in this role make him a real duelist of the word, skilled with terms and etymology as much as expert with the sword in duels.

Thor: Love and Thunder, Peter Dinklage could be part of the cast

The plot is the now classic one: Cyrano doesn’t have the courage to declare all his deep love to the beautiful Rossana, his best friend who he believes feels repulsion for him because of his physical appearance.

Meanwhile she falls in love at first sight with the handsome Christian, the character played by Kelvin Harrison. But love at first sight is something ephemeral, something that will always have to find correspondence even beyond the appearance, beyond the form, to take root even in the content. And it will be just the content that Rossana will find in Christian what most of all will make her fall in love. If the proverbial smoke is the handsome guy she’s drawn to, the roast is actually all Cyrano’s credit. Her words are hers that will be able to break through her heart, making her fall madly in love. To say that this story is poignant is an understatement.

Peter Dinklage, photos of Tyrion from Game of Thrones

It is thanks to the role of Tyrion Lannister – a role which, moreover, has earned him several awards, including a fair number of Emmys and Golden Globes – that he has become famous all over the world, but the American Peter Dinklage, originally from the New Jersey, started acting long before stepping into the shoes of one of the most beloved characters of Game of Thrones

Peter Hayden Dinklage (born June 11, 1969 in Morristown) is an American actor and producer. He became famous all over the world thanks to the role of Tyrion Lannister in the TV series Game of Thrones.

Here we see him with the Emmy won in 2018 for the role of Tyrion Lannister in the seventh season of Game of Thrones. Only the latest of the many awards grabbed thanks to the character played in Game of Thrones.

Peter Dinklage with his wife Erica Schmidt. The two have been married since 2005 and together have two children.

David Martin is the lead editor for Spark Chronicles. David has been working as a freelance journalist.
Previous Winona Ryder recalls her split from Johnny Depp
Next Sorrento, we start with the Box Office conference