Weather: Next week, already Monday risk of storms in many regions, then other news; the trend

Weather forecast for next weekA strong wave of bad weather is coming that will hit part of Italy during the next weeksince Monday 10 October. The cause is to be found in the arrival of a dangerous cyclone destined to cause thunderstorms and heavy rains on our country.
And it doesn’t end there: taking a look at the medium and long term we can say that the worst is expected later, let’s say around the middle of the month.

Attention, however, already at the start of next week when, from Monday 10 Octobera Mediterranean cyclone it will deepen on the lower Tyrrhenian Sea, triggering downpours, even in the form of storms and violent gusts of wind.
The vortex will actually come stuck from high pressure, both to the east and to the north, thus remaining substantially trapped, stationary and active for some time on the same areas.
The biggest danger with this type of configuration concerns the stationarity of storm phenomena that could insist many hours on the same areas, causing in the most extreme cases of flash floods.
Furthermore, due to the counterclockwise movement of the currents, the vortex will draw very hot air to it from the southern quadrants which, after crossing the sea and loaded with moisture, will provide a surplus of fuel (potential energy) for extreme weather events.
What is expected is one high-risk configuration: locally, just think, they could also fall up to over 100/200 l / m2 of rain in a very short time, or the equivalent of the expected rainfall throughout the month.
According to the latest updates, the areas to be kept under observation will initially be two Major Islandsthe Laziothe Campaniathe Calabria and to follow also Basilicata And Puglia.

The worsening he will insist on these areas, alternating with some drier and even sunny breaks, at least until Thursday 13 with the possibility of heavy thunderstorms still.
On the rest of Italy, however, the weather conditions are expected to be more stable and sunny thanks to a temporary high pressure protection.

But beware, the latest maps of the main international weather models bring today other news: a new unstable front could impact on our country, starting this time from the northern regions, during the weekend of 15/16 October.
However, we will have the opportunity to talk about this in our next updates. 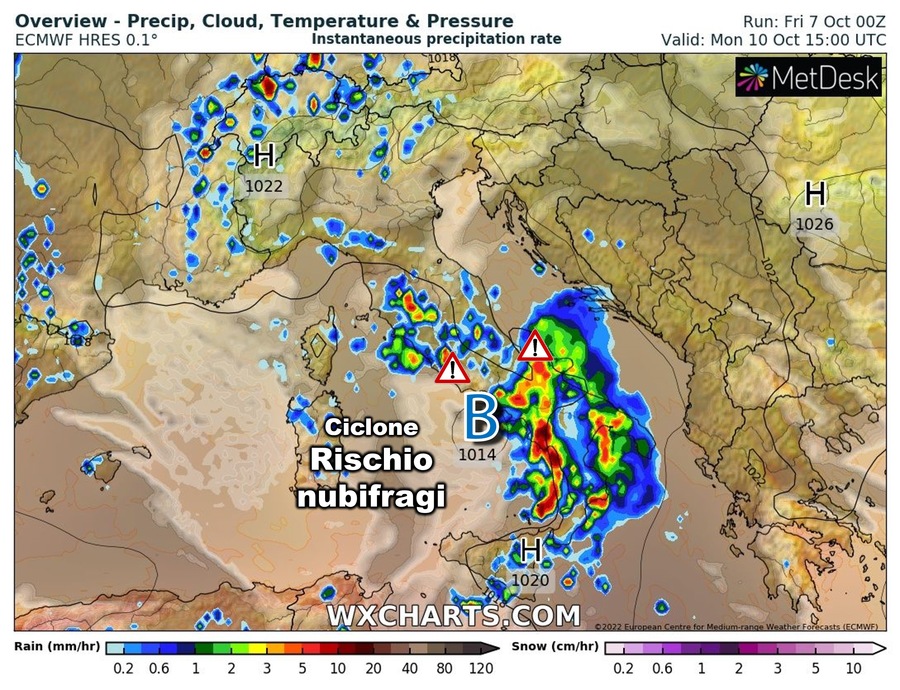