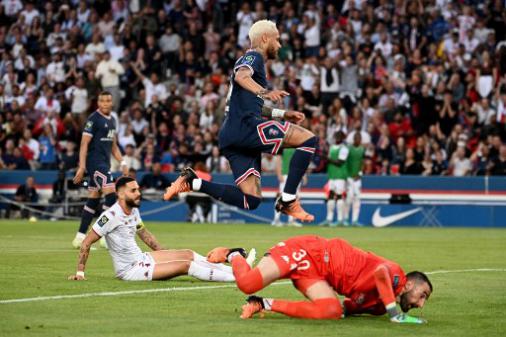 In the match against Metz, this Saturday, in Paris, Neymar left his mark and reached the hundredth goal wearing the PSG shirt. And with a special celebration. To honor leaders of FURIA, CS: GO team, who were present in the stands, the Brazilian star celebrated by referring to the game: he took off the flag and simulated shooting with a famous weapon in the FPS game.

+ PSG announces renewal of Mbappé, who receives a standing ovation in Paris

Neymar never hid his passion for games, especially CS:GO, a first-person shooter. He does lives and even had a celebration in reference to the game in the last World Cup. Neymar is also a personal friend of Gabriel “Fallen”, the greatest Brazilian player in the title.

This Saturday’s match also marked the announcement of the renewal of star Kylian Mbappé. Before the match, the agreement until 2025 between the club and the player was disclosed to the stadium, which cheered the 23-year-old youngster.

👉🏽 Neymar Jr reached the mark of 100 goals for PSG (in official games). He is now the fifth leading scorer in the club’s history, tied with Dominique Rocheteau.

Videogames entered his life in the late '80s, at the time of the first meeting with Super Mario Bros, and even today they make it a permanent part, after almost 30 years. Pros and defects: he manages to finish Super Mario Bros in less than 5 minutes but he has never finished Final Fight with a credit ... he's still trying.
Previous Acqui Terme – Saturday 2 July at Villa Ottolenghi the award ceremony for the Acqui Ambiente Award
Next Tonight on TV 23 June 2022, programs, films, Rai, Mediaset, Sky