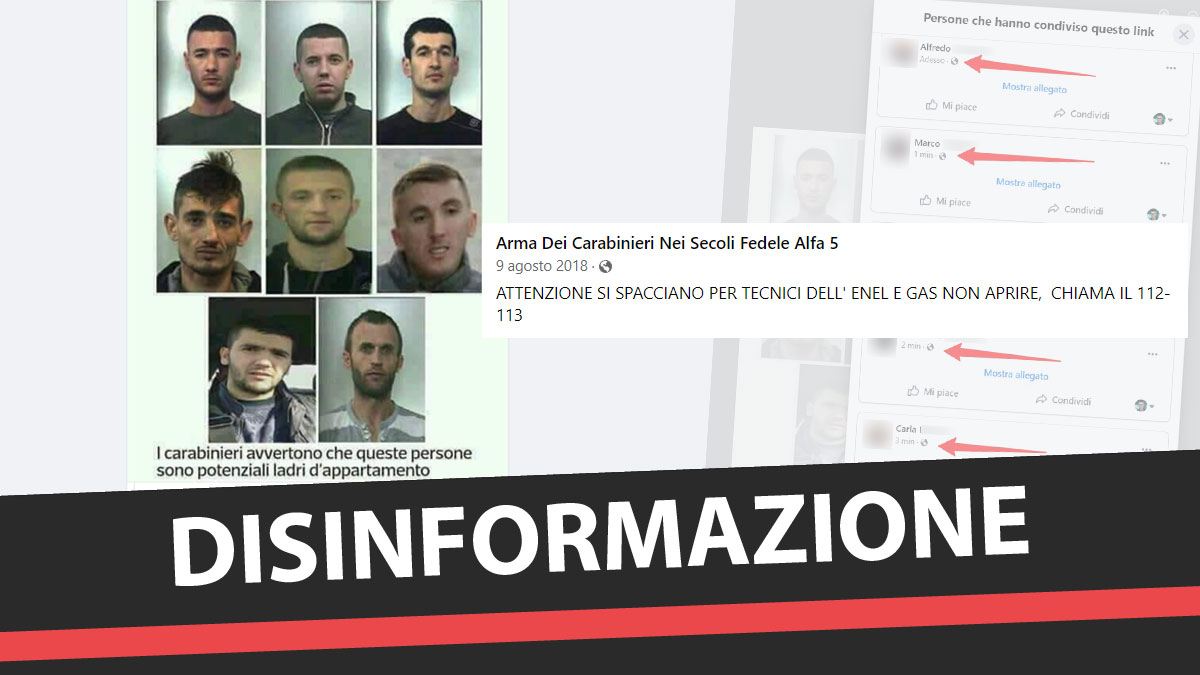 No! The people in this photo do not pretend to be “Enel and gas” technicians to steal from homes

Someone rings the bell, and, pretending to be a light or gas technician, he sneaks into homes to rob the unfortunates who opened it. This is the fear of many, who in this period are massively sharing a post on Facebook where eight people are accused of being the authors of this kind of actions.. The post is years oldbut it is nonetheless returned to the foreprobably for a renewed interest in gas, electricity, and utility bills given by the instability of the markets and the increase in prices due to the consequences of the Russian invasion of Ukraine.

For those in a hurry:

Below you can see the screenshot of the post in question. You immediately notice that it was published over four years ago, to be precise on August 9, 2018, as indicated by the writing under the name of the page that shared the photo.

Here is a screenshot of the latest shares (here, here and here) taken before this article was published:

We find it shared on October 20, 2022 in the Facebook group “Franco Assenza inside the uncensored news first passes through us” (also here, here and here).

A similar post was always circulating in 2018 with the following wording:

The modus operandi and the process

By performing a reverse image search, we go back to some articles that talk about the gang shown in the collage. One is from the Corriere della Serain which their modus operandi is described: study the movements of homeowners in the early afternoon, then take action when they leave before dinner, often to take their children to play sports. A vulnerable timetable, as houses are often not closed for such a short time. It is clear, therefore, that this being the case, thieves don’t need to pretend to be technicians Enel or gas to break into homes.

Another article, this time from Gazzettino, informs us that, in December 2018, five members of the gang were imprisoned with an abbreviated sentence, while three others went to trial. In any case, in none of the articles – not even in this one from 2017 – is it mentioned that these people have ever scammed their victims by pretending to be electricity and gas technicians.

The renewed interest and fear due to the bills

This feeds the suspicion that the bill scam was only mentioned in light of the renewed interest in the latter, electricity and gas in the last period. This is confirmed by Google Trends, which measures the number of searches for a given word or string over time. It should be noted that for both “gas” and “enel”, interest in recent months has reached the maximum peak of the last 5 years.

A post on Facebook warns that some individuals are pretending to be electricity and gas technicians to rob homes. The post dates back to 2018 but has recently returned to circulation. People are really house rats, but they didn’t pretend to be Enel and gas technicians. They broke into the apartments by breaking into them.

This article contributes to a Facebook project to combat fake news and disinformation on its social platforms. Laws here for more information on our partnership with Facebook.

The variety offered by video games never ceases to amaze him. He loves OutRun's drifting as well as the contemplative walks of Dear Esther. Immersing himself in other worlds is an incomparable feeling for him: he understood it by playing for the first time in Shenmue.
Previous The Marvels: How it was harder than Captain Marvel for Brie Larson
Next Sabatini to CM: ‘The Juve cycle ended with the arrival of Cristiano Ronaldo. Who says to Bonucci that he can’t take it anymore? ‘ | First page