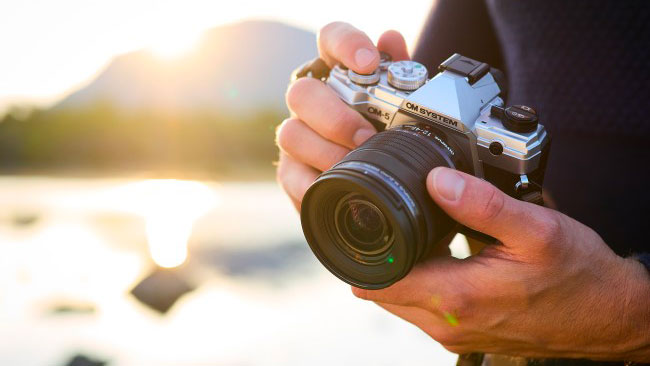 OM Digital Solutionsthe reality born on the ashes of Olympus, has announced the new Micro Four Thirds camera OM SYSTEM OM-5 which combines compactness with a series of leading technological features, all to the advantage of versatility of use, recovering many elements from the previous E-M5 III.

The new OM Digital Solutions camera designed for use in non-friendly environments and climates: the sealing system used on OM-5 makes it resistant to dust and water in accordance with the
IP53 standard and also offers resistance to low temperatures down to -10C. OM-5 then equipped with the SSWF (Supersonic Wave Filter) in order to reduce possible problems caused by dirt and dust that are deposited on the sensor when changing the optics.

Under the body is the TruePic IX processor which, in addition to image management and processing, also deals with the functionality of computational photography, the real novelty of this product, which we will discuss better a little later. OM-5 equipped with 121 cross-point contrast detection AF sensor. Again in the area of ​​focusing, we note the Starry SKY AF function which allows to obtain a high-precision automatic focusing for astrophotography activities.

We were talking about computational photography functions: the OM-5 provides the modes High-Res Shotwhich combines multiple shots to make a single 50 megapixel image, Live NDto achieve the effects of long shutter speeds as if using an ND filter up to ND16, Pro Captureto start recording the previous frames (up to 14) when the shutter button is pressed all the way, Focus Stackingto superimpose up to 8 shots and expand the depth of field, Live Compositewhich automates exposure operations in difficult light conditions, and finally the compensation of the trapezoid effect to simulate the yield of a shiftable lens.

As for the shooting performance we have one 10 fps burst in AF-C, and up to 30 fps with electronic shutter. The shutter speed can instead reach up to 1/8000 with the mechanical shutter. The ISO sensitivity ranges from 200 to 25600, expanding up to 64 ISO.

On the video front, the now obvious possibility of recording in 4K without time limits and support for videos in vertical format should be noted. We also find OM-Log support for a wider margin of maneuver in post production color grading operations.

The supplied battery, the BLS-50 model, delivers up to 310 shots.

The market availability of OM SYSTEM OM-5 is planned for end of November at a price not yet communicated but which should be placed around 1300 euros.

He likes dogs, pizza and popcorn. Already a fanboy of Nintendo and Sony, but today throws anything. He has collaborated on sites and magazines such as GameBlast, Nintendo World, Hero and Portal Pop, but today is dedicated exclusively to Spark Chronicles.
Previous Energica towards Eicma 2022: will we see a 182 HP electric motor? – News
Next Car test, find out what type you have: they could take it away from you | You will no longer be able to drive it