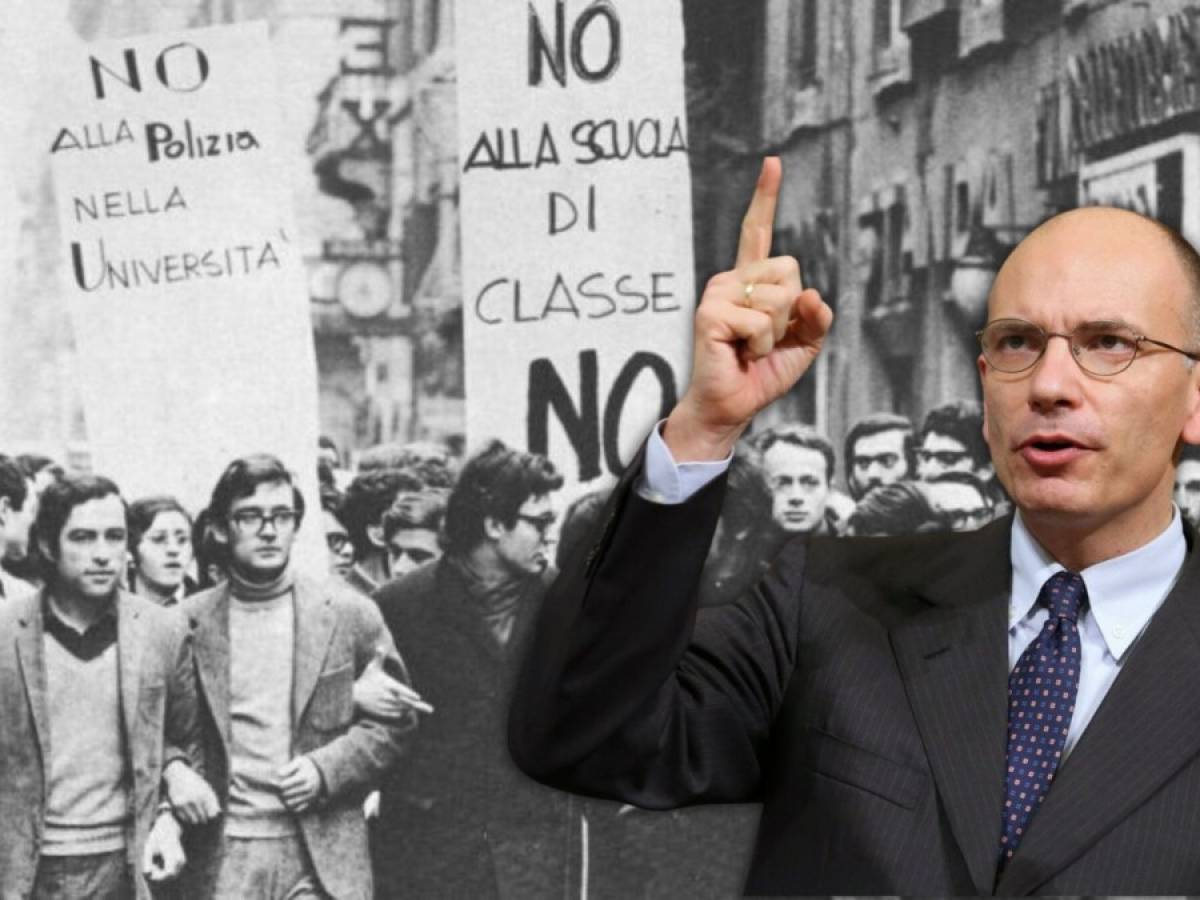 Other than young people, Letta starts from the hard core: the teachers

Enrico Letta had promised for this electoral campaign to start with young people, then with the environment, then with civil rights, … and instead he starts again from the hard core: the teachers. Or at least what it once was.

“I make a commitment: if we win, at the end of the term, teachers will be paid with a salary that will be the average of that of other European teachers”. It is the first promise made by the Pd secretary in this election campaign, after that of raising taxes with another asset.

But this time the teachers, those who for years were not only the strong electorate but also the true transmission belt of the cultural hegemony of the left instilled in the students, did not take it well.

“On the subject of the increase in teachers’ salaries it must be said that Enrico Letta has already been at Palazzo Chigi as Prime Minister and, despite the school’s contract having expired for more than 4 years, he has not thought about renewing the CCNL school expired in 2009 “ we read in a post published on the specialized site tecnichedellascuola.it “To have a contractual renewal of only 85 euros gross per month, it was necessary to wait until 2018 with the Gentiloni government. Now the film repeats itself, with a school contract that has already expired for 44 months, Enrico Letta, as Secretary of the PD, promises a salary increase in the next 5 years in the electoral campaign at the level of European salaries ”.

The professioninsègnante.it site of the same opinion: “Dear Letta, the renewal of the contract is a DUTY of the government, not a concession that must be given at the end of a term in the event that you have the support of the teachers. The thing that angers the teachers the most is the fact that his party has been in the government for the last 3 years and still is, but Letta has never suspended a word about the teachers, despite having placed a trusted minister. to the Government. I wonder if Letta communicates with Bianchi or if he has chosen him only to do what he wants without giving an account to the reference party. we will consider the idea of ​​voting for it in 2028 !!! “.

And to think that it had been before Letta Giuseppe Conte to intervene with the same proposal in a post on Facebook: “While all the others will remain anchored to their fate, between inadequate salaries and precariousness. This is not our idea of ​​a country: in Italy we have teachers with the lowest salaries in Europe. Over 800 thousand fundamental teachers for our children, for our schools. Only the Movement can propose a different future for our school. On the one hand we have the right that the government has destroyed the world of schools, on the other the wide field of Letta and Calenda that welcomes Gelmini, which has cut 8 billion in education and research ”.

And again Conte: “We are on the right side, who in the Government have strengthened the school with 80 thousand hires, making the largest investment of the last 30 years in the field of education: over 10 billion. They’re not enough. There is still a lot to do, starting with the salary issue. It is certain, however, that we have reversed a consolidated trend in politics: to fill the mouth of school by cutting investments and resources on time ”.

Yet always tecnichedellascuola.it remembers how “In the 2018 election campaign, it was Di Maio of the M5S who promised European salaries in the legislature that is about to close. Although M5S has been in government for 4 years, Italian teachers have not only not seen salary increases but have received additional and mandatory workloads. The former leader of the M5S said Dimaio on the reform of the Good School: “The Renzi reform has nothing good. We will dismantle it starting from those measures that have transformed the school into a company: the super-powers to the principals, the direct call of teachers, the bonus bonus and the training card for teachers which is more of an electoral failure “. Those of the M5S have all been betrayed promises for a large part of the school world. Now Di Maio is in fact a candidate with the PD and the same promises as him are advanced by Enrico Letta “.

Not only. All parties had pledged not to amend the aid decree bisso as not to hinder Draghi’s latest decree.

Instead, today the Democratic Party takes its word back, announcing that it will present amendments to remove the article onteach expert.

A reframe that finally introduces competence and competitiveness in the training of teachers. With the last piece approved, the law allows the establishment, when fully operational, a contingent of 32 thousand expert teachers (8,000 per year from 2032/33 to 2035/36), thus creating, within each school, a nucleus of teachers (on average 4 for each school) who can contribute to improving the overall educational offer.

as explained by Minister Bianchi “Tenured teachers who have achieved a positive evaluation for three consecutive training courses can accrue the right to an individual allowance for an amount equal to 5,650 euros per year, which are added to the salary. These are resources equal to a 15% increase in the average salary. These teachers are given the qualification of “expert” and will be an added value for their entire school community, supporting it in improving the overall training offer “.

But after having voted it in the council of ministers and in parliament, the Democratic Party in front of the protest of the unions takes everything back on the eve of the elections. “The professional qualification of expert teacher is deeply wrong, introducing a form of career without any confrontation with the social forces, the associations of teachers and outside its natural location which is collective bargaining. Because of this – promised the parent company pd to the Senate Simona Malpezzi–we will ask for it to be removed from the Aid bis decree“.

Then those who are against the Draghi agenda for the Democratic Party are always the others… While they continue to share the same political line as the grillini with whom they still pretend to be divided.

Videogames entered his life in the late '80s, at the time of the first meeting with Super Mario Bros, and even today they make it a permanent part, after almost 30 years. Pros and defects: he manages to finish Super Mario Bros in less than 5 minutes but he has never finished Final Fight with a credit ... he's still trying.
Previous the whole family in Milan
Next Thor: Love and Thunder – Director confirms tribute to The Rock in the film