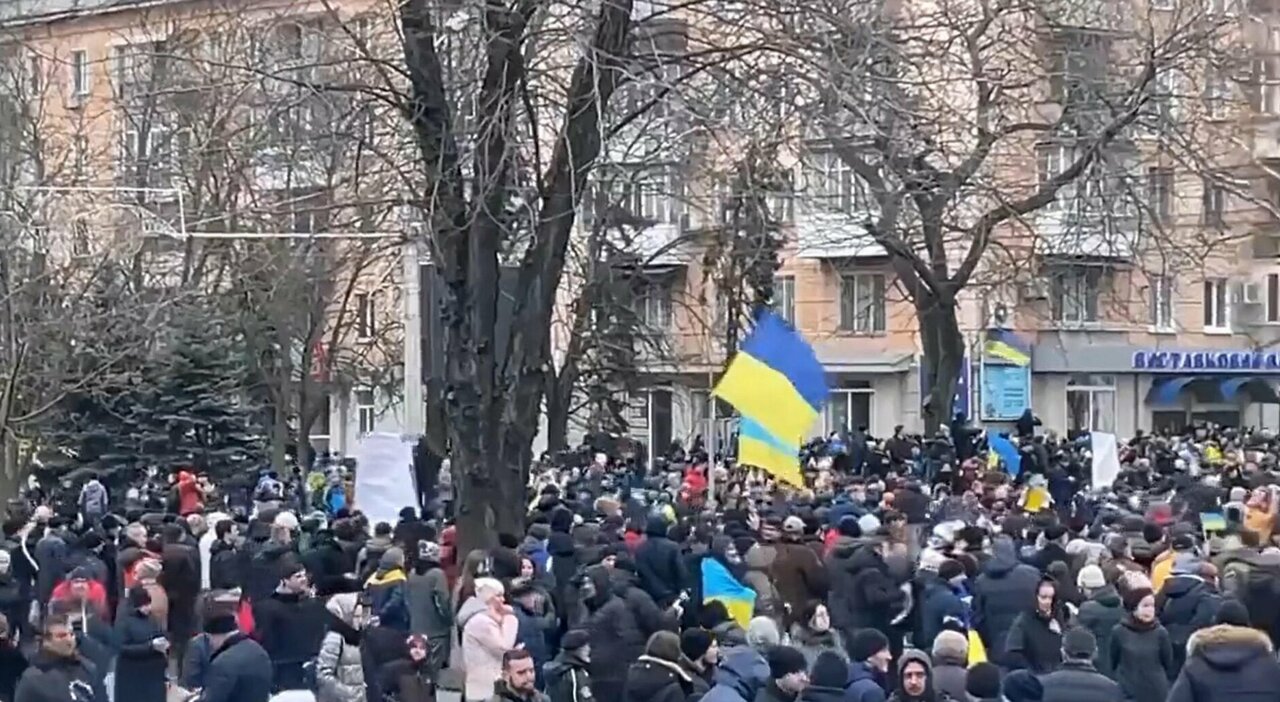 “Our retreat is not a humiliation”

Zelensky: “Kherson is ours, today is a historic day”

“Kherson is ours.” Volodymyr Zelensky rejoices in a video on telegram two days after the announcement of the Russian withdrawal from the city. «Today is a historic day. We take back Kherson – says the Ukrainian president – For now, our defenders are on the outskirts of the city. But the special units are already in town ».

“The people of Kherson were waiting. They never gave up on Ukraine. The hope for Ukraine is always justified “, Zelensky wrote again, stressing that,” even if the city is not yet completely cleared of the presence of the enemy, the inhabitants of Kherson themselves are already removing the Russian symbols from the streets and buildings. and all traces of the occupants ‘stay in Kherson.’ «The same happened in all the other cities freed by our defenders – the president claimed again – It will be the same in those cities that are still waiting for our return. Ukraine will return to all its inhabitants. I thank every soldier and every unit of the defense forces who are making this offensive operation in the south possible. Everyone, from ordinary soldiers to generals. The armed forces, intelligence, the SBU, the National Guard, all those who have brought today’s day closer to the Kherson Oblast ».

Kiev, after Kherson ensure that Russians flee all of Ukraine

“The ‘Russian World’ knows how to effectively … escape. From Kiev, from Kharkiv, from Kherson. It is now important to ensure a large-scale escape of the Russian occupiers from Ukraine. From all over our territory ». The advisor to the Ukrainian President Mykhailo Podolyak wrote it on Twitter, commenting on the Russian withdrawal from Kherson and the entry of Ukrainian troops into the city. In a previous tweet, Podolyak stressed that «in February some thought that the Ukrainian army would not last more than» three days «. For now: he defended Kiev, freed 3 regions, freed Kharkiv from occupation and entered Kherson. The last 9 months must teach everyone a lesson: don’t be afraid of the »ru-bear« (Russian bear), don’t avoid a fight, believe in Ukraine ».

Moscow, 30,000 soldiers withdrawn on the east bank of the Dnipro

The Russian Defense Ministry says more than 30,000 troops and 5,000 military vehicles and armaments have been transferred to the left bank of the Dnipro River in the retreat from Kherson. This was reported by the Interfax agency.

The Biden administration is divided with part of the government that would like to press on Kiev to seek the diplomatic path to end the war and other advisers who believe it is still too early. According to reports from the New York Times, US joint chief of staff Mark Milley said he was convinced that Kiev had done everything possible since winter and should now try to cement the advance at the negotiating table. Other officials, on the other hand, believe that neither Kiev nor Moscow are ready to negotiate: a pause in the fighting, in their opinion, would only allow Moscow to regroup.

The Antonovsky Bridge over the Dnpr River in Kherson was partially destroyed. Ukrainian and Russian media reported it. In particular, the Russian journalist of Komsomolskaya Pravda, Oleksandr Kots, has posted on Telegram a video of the destruction of the bridge, which is missing two spans. There are currently no official comments from local authorities and the political-military leadership of Ukraine regarding the destruction of the bridge.

Kremlin: withdrawal from Kherson is not a humiliation

Vladimiri Putin’s spokesperson, Dmitri Peskov, replied “no” to the question whether the withdrawal of Russian troops from Kherson was a “humiliation” for the Kremlin: the BBC reports. “There are a lot of different experts, some say what you said, others say other things. We don’t want to comment on any of these things, ”Peskov said according to the British broadcaster.

Russian troops completed the withdrawal from the city of Kherson by moving to the left bank of the Dnieper. This was announced by the Moscow Ministry of Defense quoted by TASS. “During the transfer to the left bank of the Dnipro, not a single piece of military equipment or a weapon was left on the right bank, all Russian military personnel crossed” the river, “no loss of personnel, weapons, were allowed. equipment and material of the Russian group ”, claims the Moscow Defense Ministry, according to which the withdrawal from Kherson would have been completed at 5 in the morning. The online newspaper Meduza reports it.

“The special military operation in Ukraine can end with the achievement of its objectives, or the achievement of the objectives through peace negotiations, which is possible.” Kremlin spokesman Dmitry Peskov said this in response to American President Joe Biden, according to whom the conflict in Ukraine “will not end until Putin leaves the country”.

The Kherson region will remain part of Russia despite the withdrawal of Moscow troops from the city. “There are and cannot be changes” on this, said Kremlin spokesman Dmitry Peskov, quoted by TASS.

Zelensky: to Mykolaiv Russian cynical response to our successes

I raid on Mykolaiv «Are the cynical response of the terrorist state to our successes on the front. An attack on a 5-story residential building: destroyed from the fifth to the first floor. Unfortunately there are deaths and injuries. Rescue operations are underway. Russia is not giving up on its despicable tactics. And we will not give up our fight. The occupiers will be held responsible for any crime against Ukraine and the Ukrainians ”. Ukrainian President Volodymyr writes it Zelensky on Telegram. Meanwhile, the governor of the region, Vitaliy Kim, has updated the death toll from the raid to 5 dead.

Kiev: 4 dead in Russian attack against palace in Mykolaiv

The toll of one is at least four dead at the moment Russian attack against a residential building in the city Mykolaiv, in southern Ukraine. The regional governor reports. “Unfortunately there are already four deaths in the five-story building.” Governor Vitaliy Kim said on social media.

There South Korea denies the sale of artillery shells to United States destined for Ukraine. According to Seoul, if the ongoing negotiations are successful, the ammunition will be destined only for American forces. The agreement provides for the purchase of 100,000 155 mm artillery shells. According to the Wall Street Journal, which cites “US officials”, the bullets would instead be destined for the Ukrainian armed forces. “To alleviate the shortage of 155 mm ammunition in the United States, negotiations are underway” between Washington and a South Korean company “to export ammunition,” the South Korean Defense Ministry said in a statement. “This is based on the assumption that the United States will be the end users” of the bullets, reads the press release which specifies that the “South Korean policy of not supplying lethal weapons to Ukraine remains unchanged”

Biden: the war will end when Putin leaves Ukraine

The conflict in Ukraine “It will not end until Putin leaves the country.” American President Joe Biden told reporters in tow before boarding Air Force One that will take him to Cop27 in Sharm el Sheikh.

Wsj: US will buy weapons for Ukraine from South Korea

The United States will purchase artillery shells destined for Ukraine from South Korea. This was revealed by American officials to the Wall Street Journal. This is an unprecedented fact, a sign of Washington’s difficulty in finding weapons to help Kiev in the war against Russia. According to sources, the US will purchase 100,000 155mm rounds, enough to supply Ukrainian troops for several weeks.

War in Ukraine, the latest news today. The United States will purchase 100,000 artillery shells from South Korea to supply them to Ukraine. This was revealed by American officials al Wall Street Journal. If confirmed, this would be an unprecedented fact, a sign of Washington’s difficulty in finding weapons to support Kiev in the war against Russia. But Seoul specifies: the sale is intended for the US and not for Ukrainian troops.


Meanwhile, Ukraine recaptures 12 villages in Kherson after the Russian army announced its withdrawal from the region, and frees Mykolaiv from Russian troops. Kiev is proceeding with caution, however: Russia is undermining Kherson to turn it into a “city of death”, warns Zelensky’s adviser. Tough the Ukrainian president: any attempt by Russian forces to blow up the dam of the hydroelectric plant in Kakhovkaflooding Ukrainian territory and draining the Zaporizhzhia nuclear power plant will mean that Moscow is “declaring war on the whole world.”

Videogames entered his life in the late '80s, at the time of the first meeting with Super Mario Bros, and even today they make it a permanent part, after almost 30 years. Pros and defects: he manages to finish Super Mario Bros in less than 5 minutes but he has never finished Final Fight with a credit ... he's still trying.
Previous who is the 16-year-old striker called up by Mancini
Next The Batman: Zoe Kravitz declares that Catwoman is bisexual