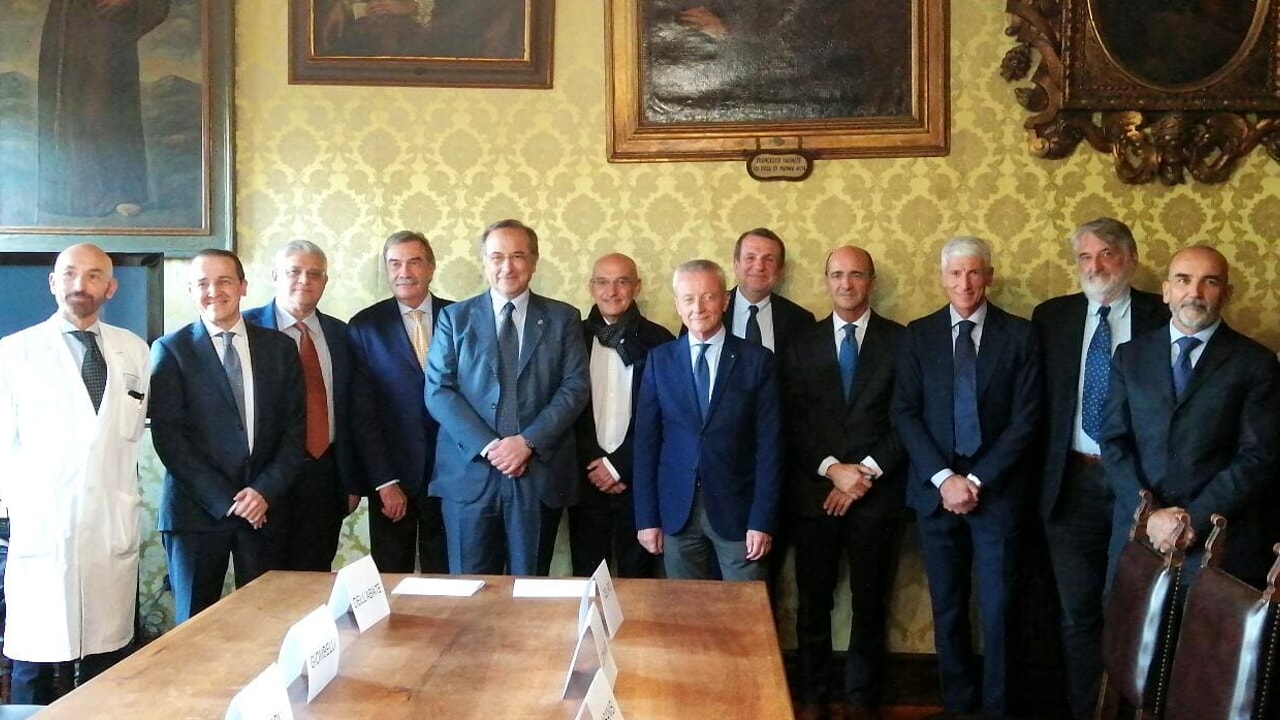 The four professors appointed by the University Hospital of Parma – in agreement with the University of Studies – will take on the position of directors on November 1st, to lead the Head – Neck Department and the complex structures of Clinic and Therapy Medical, Clinical and Medical, Maxillofacial Immunology.

A passing of the baton in the name of continuity, as pointed out by the general manager of the Major Massimo Fabi and the Rector Paolo Andrei. Thanks went first to Riccardo Volpi and Enrico Sesenna, who have spent their professional lives for the patients of the Maggiore Hospital bringing the structures they manage, respectively Clinic and Medical Maxillofacial Therapy, to high levels of excellence. Just as he did Ermanno Giombelli, head of the Neurosurgery unit from December 2010 until November 30th. The department under his guidance has in fact become over the years a reference point for various neurosurgical pathologies and can count on a high-level team.

A warm thanks from the director Fabi and the rector Andrei a Paolo Dell’Abate, surgeon of the General Surgical Clinic of the University Hospital directed by Paolo Del Rio who, thanks to his teachings in the operating room and in university classrooms, has raised specialists ready to collect his experience developed in particular on abdominal and colorectal cancer surgery.

Massimo Fabi and Paolo Andrei then turned to the new representatives Enrico Pasanisi, Aderville Cabassi, Silvano Ferrari with the awareness that they will collect the legacy with enthusiasm and professionalism. Words extended to Giuseppe Regolistiformer acting director and, from 1 October last, confirmed at the helm of the Clinic and Medical Immunology which belongs to the Department of General and Specialized Medicine directed by Francesco Leonardi.

He was appointed to the head of the Head-Neck Department – one of the eight care departments in which the University Hospital of Parma is organized – Enrico Pasanisi what happens to Enrico Sesenna. Student of the School of prof. Carlo Zini, since 2019 Pasanisi is director of Otolaryngology and Otoneurosurgery of the Maggiore hospital as well as being director of the School of Specialization in Otolaryngology of the University of Parma. He has contributed, in particular, to the development and improvement of otological microsurgery in the treatment of deafness, bringing, in recent years, the Operative Unit to the first place among the National Health Authorities as regards the volume of hospitalizations for surgical operations on the ear.

The direction of the Clinic and Medical Therapy will pass from Riccardo Volpi ad Aderville Cabassi, full professor of Internal Medicine with specialization in Internal Medicine and Cardiology. Head of the Arterial Hypertension Center, which carries out about 1600 visits a year, Cabassi carries out an intense research activity, both from an experimental and clinical point of view, of the mechanisms involved in the development of arterial hypertension and at the basis of its cardiovascular complications and kidney, especially in heart failure.

To pick up the baton of Enrico Sesenna will be Silvano Ferrari Professor in Maxillofacial Surgery at the University of Parma. After experiences in international hospitals, in 1999 he joined the University Hospital of Parma, under the guidance of Enrico Sesenna with whom he introduced and developed reconstructive oncological procedures which have become of great use in the therapeutic treatment of head and neck cancer patients. To his credit over 3 thousand surgeries under total anesthesia as the first operator and 900 interventions of head and neck reconstructions with microvascular flaps.

Confirmed director, after a period of acting, Giuseppe Regolisti at the helm of the Clinic and Medical Immunology. Since 2007 he has been working at the University Hospital of Parma in the Clinic and Medical Immunology facility. He has devoted himself for a long time to the study of experimental and clinical problems in the field of arterial hypertension, and subsequently of hydroelectrolytic and acid-base imbalances and acute and chronic renal failure. He is the author of 125 articles in the most prestigious international scientific journals.

Videogames entered his life in the late '80s, at the time of the first meeting with Super Mario Bros, and even today they make it a permanent part, after almost 30 years. Pros and defects: he manages to finish Super Mario Bros in less than 5 minutes but he has never finished Final Fight with a credit ... he's still trying.
Previous The song of life film, plot, actors, cast, finale, where it is filmed, location
Next OFFICIAL: Joao Mario, Sporting asks for compensation of 30 mln. Quiet Inter because …