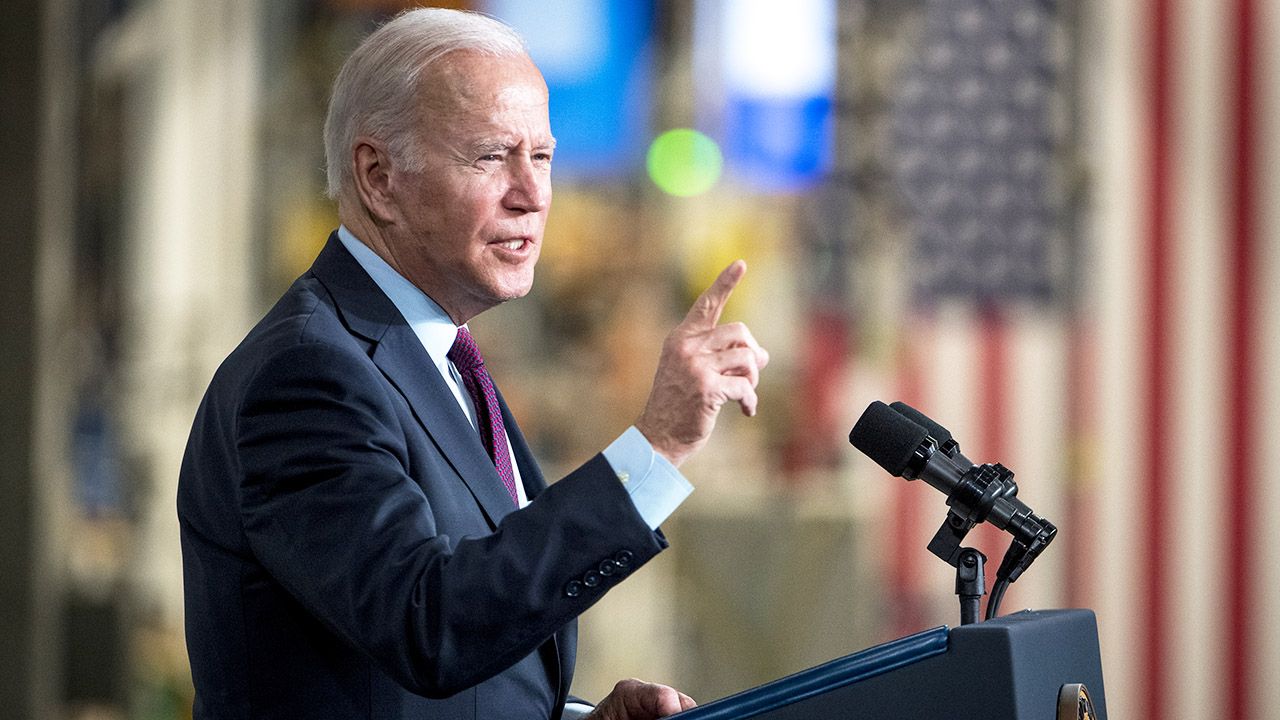 After Joe Biden defeated Donald Trump in the presidential election, the liberal-left media breathed a sigh of relief. Before a few months had passed, however, the wave of elation gradually subsided and turned into disappointment combined with embarrassment. Afghanistan has become a drop of bitterness. But these drops have accumulated so much that today Joe Biden records record low results in the polls and there is no indication that he can change this negative trend. Despite this, he announces that he will run for re-election in 2024.

Biden’s mighty troubles. Crash in polls and the best Republican record in 40 years

38 percent support and as much as 59 percent disapproval – such poll results, just a few months after the start of the presidency, not only did not expect Joe Biden, who celebrated his 79th birthday a few days ago, but also the political-media-celebrity establishment that supported him, which until recently proclaimed that America is returning to normal, after the “dark” years of Donald Trump’s rule.

There were no words of ecstasy that had not been uttered then, no words of contempt for the defeated Donald Trump, who to this day does not recognize the election results and demands their re-examination.

He defeated Trump and the stairs began

Donald Trump, who has become the embodiment of all superstitions and more or less imaginary fears that the American left feeds on a daily basis. Donald Trump, who from the very beginning of his presidency was mocked, ridiculed and harassed by the establishment.

From the first to the last day of his presidency, American progressives, and their counterparts around the world, accused him of fascism, racism, misogyny, and a total inability to hold office.

However, when Joe Biden came to power, the same media overnight announced that the US was now returning to its tracks and announced how relations with Western Europe and the world in general would improve immediately. The atmosphere of a universal celebration made it seem that by magic, all conflicts, problems, and a time of cooperation and prosperity would disappear. Eventually, the troublemaker left, and in his place came the nice Uncle Joe.

They don’t want to be friends with Uncle Joe

This idyll did not last long, however. It turned out that neither China, nor Russia, nor Iran, nor North Korea, nor the Taliban in Afghanistan, nor all other bad characters of the global political scene not only do not want to change, but – and here is a surprise – use the “good nature” of the American leader and they are even more aggressive than before.

The United States has imposed sanctions on two entities linked to Russia, involved in the construction of the Nord Stream 2 gas pipeline, the secretary of state …

So what if – as explained by “USA Today” – admittedly Joe Biden has the lowest ratings during this term of office among all modern presidents except … Trump, when it was over the Democrat that the strongest media and pressure groups spread the largest media umbrella, while a bucket of washing was poured over Trump’s head every day?

What the broadly understood progressive circles feared most happened sooner than they could have expected. Support for Biden is falling, especially among the so-called independent voters, that is, those who were to ensure him victory over Trump.

As experts point out, this may have enormous consequences for the congressional elections that are rapidly approaching next year.

The disappointment of this group is huge – as many as 44 percent of them assess this presidency as worse than they expected, and only 6 percent are satisfied with it.

Moreover, as many as 64 percent of those polled do not want Biden to run for a second term in 2024, and only 28 percent of Democratic Party voters are positive about it.

Recent research shows how much negative Biden’s assessments can affect the results in the Congressional elections, as 46 percent of those polled would vote for a Republican candidate, while a democratic one by as much as 8 percentage points less.

Biden promises to improve the lives of Americans

Following the adoption of the Infrastructure Act, US President Joe Biden promises his countrymen a noticeable improvement in living conditions. – Your life will change …

While the infrastructure bill, the implementation of which is expected to cost around $ 1.2 trillion over 7 years, is supported by 61 percent of voters, the “Build Back Better” bill, for which $ 1.85 trillion will have to be allocated, is 47 percent of supporters and only 3 percentage points less opponents.

These are huge projects promoted by Biden, but their elements contributed to the struggle of the inner-party wing of the radicals against the moderate Democrats.

Biden hopes that their implementation will allow him to pour optimism into the hearts of Americans and, at the same time, to improve his ratings.

For many Republicans, however, this is another example of how leftists seek to strengthen central governments, increase taxes, levies, and incur more debt. This money is to fill the pockets of friendly business and pursue ideological goals.

Virginia will tell the truth

A cold shower for the Democratic Party came during the recent Virginia governorate election, which was won by a Republican representative. The disappointment on the left side is all the greater because a year ago Biden defeated Trump here with a clear majority of votes.

Commenting on the negative results of the elections for Democrats, Joe Biden punched his chest, judging that people are simply dissatisfied with many things, but summa summarum, the guilty ones should not be found in the White House or in his home party.

Biden: We are considering a diplomatic boycott of the Beijing Games

US President Joe Biden admitted on Thursday that his administration was considering a diplomatic boycott of the Beijing Winter Olympics. Earlier…

Rising inflation, prices of basic products and gasoline, the dramatic situation on the southern border, the continuing pandemic and its social and economic consequences, increasing violence and crime in cities, further ideological projects of leftist circles, as well as the disastrous results of foreign policy, symbolized by the flight from Afghanistan – all this falls on the shoulders of Biden, despite the fact that he is not personally responsible for everything.

However, if the media blew the balloon so hard and voters did not get what they expected, then disappointment came.

They continue to clap

But the media still applaud the ruling team and instead of holding them accountable for the effects of their actions or their lack, they focus, for example, on how well Kamal Harris is doing in his position as vice president – focusing the audience’s attention primarily on the fact that he is the first a woman in this position and, moreover, a woman of color. Competence, effectiveness, cross-party cooperation – all this goes to the background.

The fact that Biden’s record with voters continues to deteriorate is also evidenced by the concerns of respondents regarding his health. More specifically, that this 79-year-old politician is not mentally fit enough to hold this office.

Biden took over as president again. Earlier, he handed over power to Harris

It is worth noting here that during the previous survey conducted a year ago, just before the presidential election, Americans’ assessments of his health were much more positive.

As it turns out, what the mainstream media managed to hide during the election campaign, so later, when Biden, like the president, spoke on various topics, often using very strange phrases, losing threads, confusing the facts – it has already happened much more difficult.

Hence, as many as 57 percent of the respondents assessed that the president communicated in an unclear manner, and not many more people accused him of insufficient energy.

One of the elements of Russia’s hybrid war is cyberattacks. Their target was Poland, among others. In America, losses caused by …

And although on Friday the president’s doctor in a letter published by the White House assured him that he remained healthy and fit to continue his function, it is not this declaration, but what Americans see and hear when watching Biden, will have the most important impact on their evaluation.

Democrats, meanwhile, have cause for concern, as Republicans now have the biggest lead in the polls in 40 years. According to research by ABC News and the Washington Post, 51 percent. Registered electorate declares support in its Republican congressional district, and 41 percent of Democrats.

When we add to this the continuing high popularity of Donald Trump among Republican voters and his efforts to convince the undecided, disappointed Joe Biden, as well as Washington’s problems on the international stage, there is a real problem for the American left to overcome.

For now, it focuses only on pursuing successive, more and more extreme leftist goals and convincing, through the service media, that reality looks much better than millions of Americans observe every day.

The author is a journalist of the Polish Radio

Videogames entered his life in the late '80s, at the time of the first meeting with Super Mario Bros, and even today they make it a permanent part, after almost 30 years. Pros and defects: he manages to finish Super Mario Bros in less than 5 minutes but he has never finished Final Fight with a credit ... he's still trying.
Previous Legia.Net – Legia Warszawa – Gomes, Noiszewski and Nawotka trained with the first team
Next Dynamo Kiev – Bayern Munich. A beautiful overturn of “Left”, a triumph for Bayern. LM