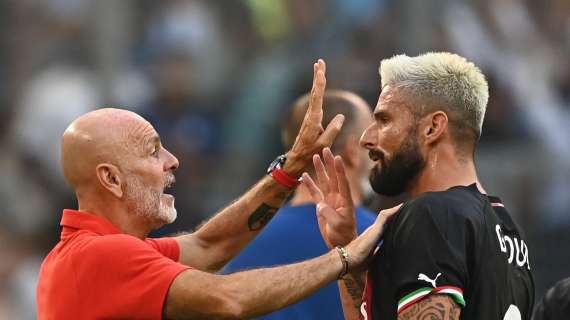 Pioli and Giroud, “safe” renewals. The club wants to lock them up until 2024

The renewal theme has been central to Milan for some time. Leao is only the latest player in the midst of the rumors concerning the extension of the contract: before him Donnarumma, Calhanoglu, Kessie and Romagnoli. If things are more delicate for the Portuguese player, there are a couple of renewals that shouldn’t be a problem at Milan: those of Stefano Pioli and Olivier Giroud.

As reported this morning the Gazzetta dello Sportthe current contracts of the coach and the Rossoneri number 9 expire next summer, in 2023. The intent of the club in via Aldo Rossi would be to extend the agreements at least until the summer of 2024. Both Pioli and Giroud arrived at Milanello amid the skepticism of the fans: the first was not considered a top coach, the second was considered a simple reinforcement of Ibrahimovic. However, both have already written the history of Milan, going to disavow all possible criticisms and contraindications. Pioli convinced after the lockdown, chased away Rangnick’s ghost, found the Champions League and led the Rossoneri to the top of Italy. As Giroud progressed last season he became more and more decisive with his goals as a true raptor of the area in the cult matches that brought the Scudetto to Milanello. Both they want to continue to win for the Rossoneri and they want to do it together.

For Pioli and Giroud, the numbers speak for themselves. The Rossoneri coach has grown with Milan and vice versa, with the passing of the months and seasons he has given a very precise mark to his team, recognizable even in the face of departures deemed irreparable or the various players unavailable. A path that led him to win the Scudetto and to have a very high victory percentage: more than 60%, 87 matches taken home out of a total of 152 direct from the Milan bench. After the renewal signed at the end of November 2021, the option for the following season could be exercised during the World break. The French striker has never betrayed, especially when he started in the starting position: in his 42 matches from the first minute with the Rossoneri, Giroud has found 20 goals. Virtually a goal every two matches. The Devil also helped him to regain the national team, which is why Olivier will be expected at the headquarters after the World Cup, where he will most likely go to defend the title he won four years ago in Russia.

David Martin is the lead editor for Spark Chronicles. David has been working as a freelance journalist.
Previous Intel plant in Italy, Piedmont wants to beat Veneto in the Cesarini area
Next he was the holder of his life insurance