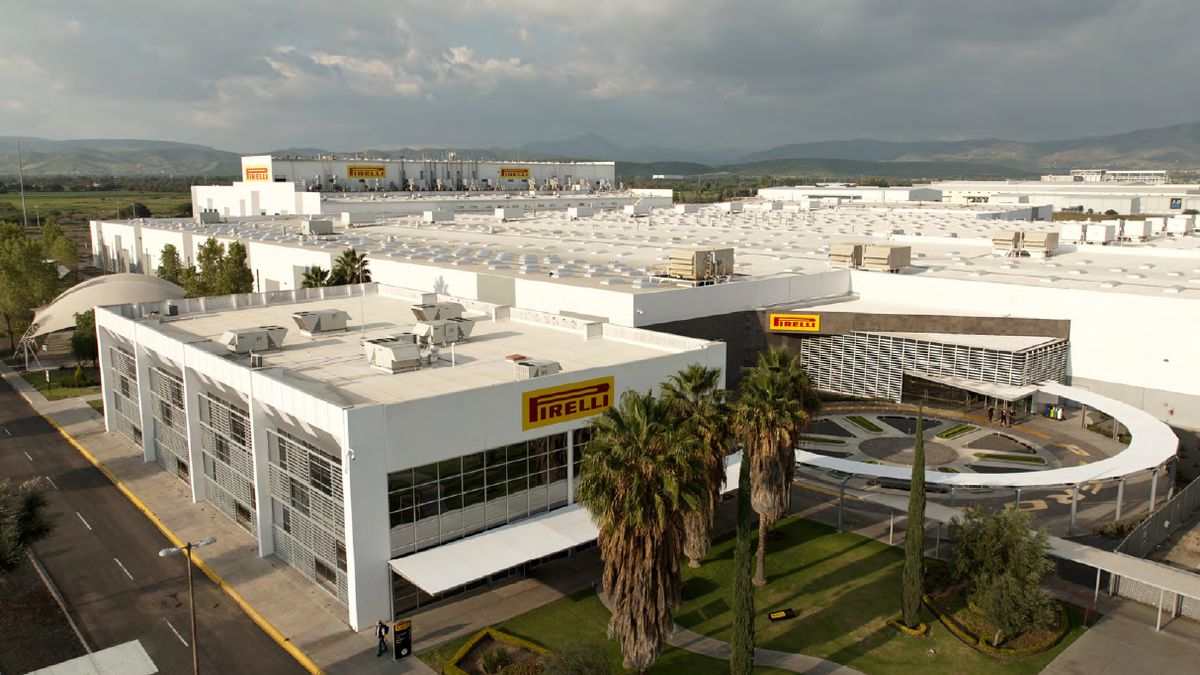 Pirelli, investment of 114 million euros in the Mexican plant of Silao

The investment will increase the factory’s production capacity by more than 1 million pieces for a total of 8.5 million tires when fully operational by 2025. On the occasion of the 10th anniversary of the factory, Diego Sinhue Rodriguez Vallejo, governor of the Mexican state of Guanajuato , visit the factory with Claudio Zanardo, President and CEO of Pirelli North America. To celebrate the anniversary Pirelli Mexico has produced the book “Pirelli, the culture of innovation”

On the occasion of the 10th anniversary of the establishment of the Silao factory, Pirelli announced the start of the 114 million euro investment – ​​already envisaged in the industrial plan 2021-2022|2025 with implementation in the two-year period 2022/2023 – aimed at further increasing the High Value production of the Mexican production site. The investment, which confirms the strategic importance of the plant, will make it possible to increase its production capacity by over one million pieces by 2025 to a total of 8.5 million tires (from 7.2 million at the end of 2022 ), with an expansion of the production area of ​​16,000 square meters to over 220,000 square meters. L’production increase and the further improvement of the mix will be accompanied by the creation of 400 new jobs for a total of 3,200 people when fully operational.

The investment was announced during the visit of the governor of the Mexican state of Guanajuato, Diego Sinhue Rodriguez Vallejo, to the Silao factory for its 10th anniversary celebration. The ceremony was attended by the Executive Vice President and CEO of Pirelli, Marco Tronchetti Provera with a video message, the Ambassador of Italy in Mexico, Luigi De Chiara, the President and CEO of Pirelli North America, Claudio Zanardo, and the CEO and General Manager of Pirelli Neumaticos SA Mexico, Paolo Benea.

PIRELLI, THE CEO TRONCHETTI PROVERA: “THE SILAO FACTORY HAS HELPED US BECOME LEADER IN HIGH VALUE”

“The Silao factory has made an important contribution to the success of Pirelli’s global strategy to become a leader in the High Value segment. When we chose Silao, and the Guanajuato region, as the site of a new factory 10 years ago, our expectations were very high. Today I am happy to say that we have achieved all our objectives and that the factory and the people who work there have exceeded our expectations. Silao is one of the most technologically advanced plants of the group and will soon also host a new R&D center. As we have done in these 10 years, we continue to strongly believe in Silao and its people,” said Marco Tronchetti Provera, Executive Vice President and CEO of Pirelli.

“Mexico represents a strategic area for all of Pirelli’s activities in North and Central America and with this investment we will be able to further increase Pirelli’s technological and industrial competitiveness. I want to thank all the people and institutions who have contributed to the growth of the Silao plant over the years”, he underlined Claudius ZanardoPresident and CEO of Pirelli North America.

“We are proud to have Pirelli in our state of Guanajuato and to celebrate the tenth anniversary of the founding of the Silao factory and the 150th anniversary of the company. The presence of Pirelli, one of the most advanced companies in terms of innovation and technology, contributes to the continuous process started by the state of Guanajuato aimed at the transition from ‘manufacturing’ to ‘mindmaking’. Pirelli and Guanajuato share values ​​and a vision of the future, thus contributing to building a successful story together. We are grateful to Pirelli for the constant investments that confirm the strategic importance of this plant, strengthen the company’s trust in our state and help support our development by generating jobs for the families of Guanajuato,” said Diego Sinhue Rodríguez Vallejo, Governor of the Mexican state of Guanajuato. Located within the Silao “Puerto Interior” industrial hub in the state of Guanajuato, one of Mexico’s major logistics centers and economic and technological hubs, Pirelli inaugurated the plant in 2012 to serve the local and North American markets.

Over the past decade, the Silao plant has grown rapidly, from a capacity of around 1.5 million tires and a workforce of 300 at the end of 2012 to a capacity of 7.2 million tires at the end of 2022 and around 2,800 employees. Its production focuses on the High Value segment, in particular High Performance and Ultra-High Performance tires for cars, electric vehicles, SUVs and Light Trucks. The Mexican factory has always supplied the most innovative Pirelli solutions such as the Cyber ​​tyre, the PNCS (Pirelli Noise Canceling System™) and RFID writing, aimed at tracking tires to provide product information to the entire logistics chain. Equipped with the group’s most advanced production processes, the Mexican plant has adopted the principles of Industry 4.0 in recent years, associated with a growing commitment to attention to the environment, through the adoption of international standards that promote the saving of electricity and water and which guarantee the recycling of the plant’s waste.

The commitment announced today brings Pirelli’s investments in the Mexican plant to over 800 million euros since its foundation and follows the announcement, in May 2022, of the creation of the first Research and Development Center of the company in Mexico, which will add to the 13 already existing centers in the world. Innovation has always been a key element for Pirelli which every year invests around 6% of revenues deriving from High Value products in Research & Development and can count on a portfolio of over 6,700 patents.

“Pirelli, the culture of innovation”, a book to celebrate the anniversary

To celebrate an important milestone such as the tenth anniversary of its foundation, Pirelli Mexico has published the book “Pirelli, the culture of innovation”, published by Trilce Ediciones and created also thanks to the contribution of the Pirelli Foundation and the materials kept in the Historical Archive corporate: a way to remember the local legacy of a company that in January 2022 has accomplished 150 years of activity celebrated with worldwide celebrations. The book traces the stages in the development of the Silao plant, its rapid growth, its deep roots in the local area and local communities, and the contribution Pirelli has made to the growth of the Guanajuato region.

The celebration of the tenth anniversary of the Silao plant takes on particular importance in a year in which Pirelli commemorates the 150th anniversary of its foundation in Milan where, on January 28, 1872, the twenty-three John Baptist Pirelli he founded a rubber factory that would become one of the most advanced companies in the world. Known for manufacturing excellence, for a brand established in culture, in the world of lifestyle and in sport and motorsport at the highest levels, today Pirelli counts 18 production plants in 12 countrieswith a commercial presence in over 160 countries.

David Martin is the lead editor for Spark Chronicles. David has been working as a freelance journalist.
Previous now he wants a relationship with a woman
Next The Batman is the most-reviewed film of 2022