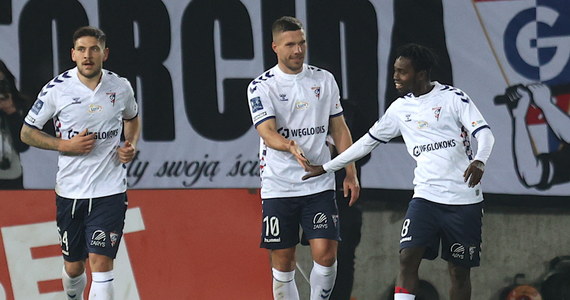 It started with an offensive banner, displayed at the Legia stadium by fans from the capital. Later, the Nieznani Sprawcy fan group published a post on social media, also hitting Górnik. And this is what Podolski referred to in his entry.

Podolski, who after the match with Górnik posted an entry in social media with a photo of the banner and the note “It’s nice that you were in Zabrze”, now went a step further and allowed himself a mocking comment about Legia fans.

“Dear Fans, on a cold autumn November evening we” hosted “Legia Warszawa in Zabrze. The air was clean, it smelled only of love for Górnik Zabrze, expressed by 23 thousand of the best fans under the sun …” – wrote “Poldi” on Twitter.

Dear Fans, On a cool November autumn evening, we “hosted” Legia Warsaw in Zabrze. The air was clean, it smelled of love for Górnik Zabrze, expressed by 23 thousand of the best fans in the world … pic.twitter.com/XhrX1ytI3d
– Lukas-Podolski.com (@ Podolski10)
November 22, 2021

“Oh, what an evening it was in a city where there is no Wawel, no Long Market, no gothic market …” – added the Górnik player.

Górnik’s players have reasons to be happy
/Andrzej Grygiel /PAP

David Martin is the lead editor for Spark Chronicles. David has been working as a freelance journalist.
Previous Black Friday or Fake Friday? Don’t be fooled
Next La Palma: The San Juan volcano “disappeared” due to the Cumbre Vieja eruption

The Polish defender opened the scoring in the third minute, but in the end the …