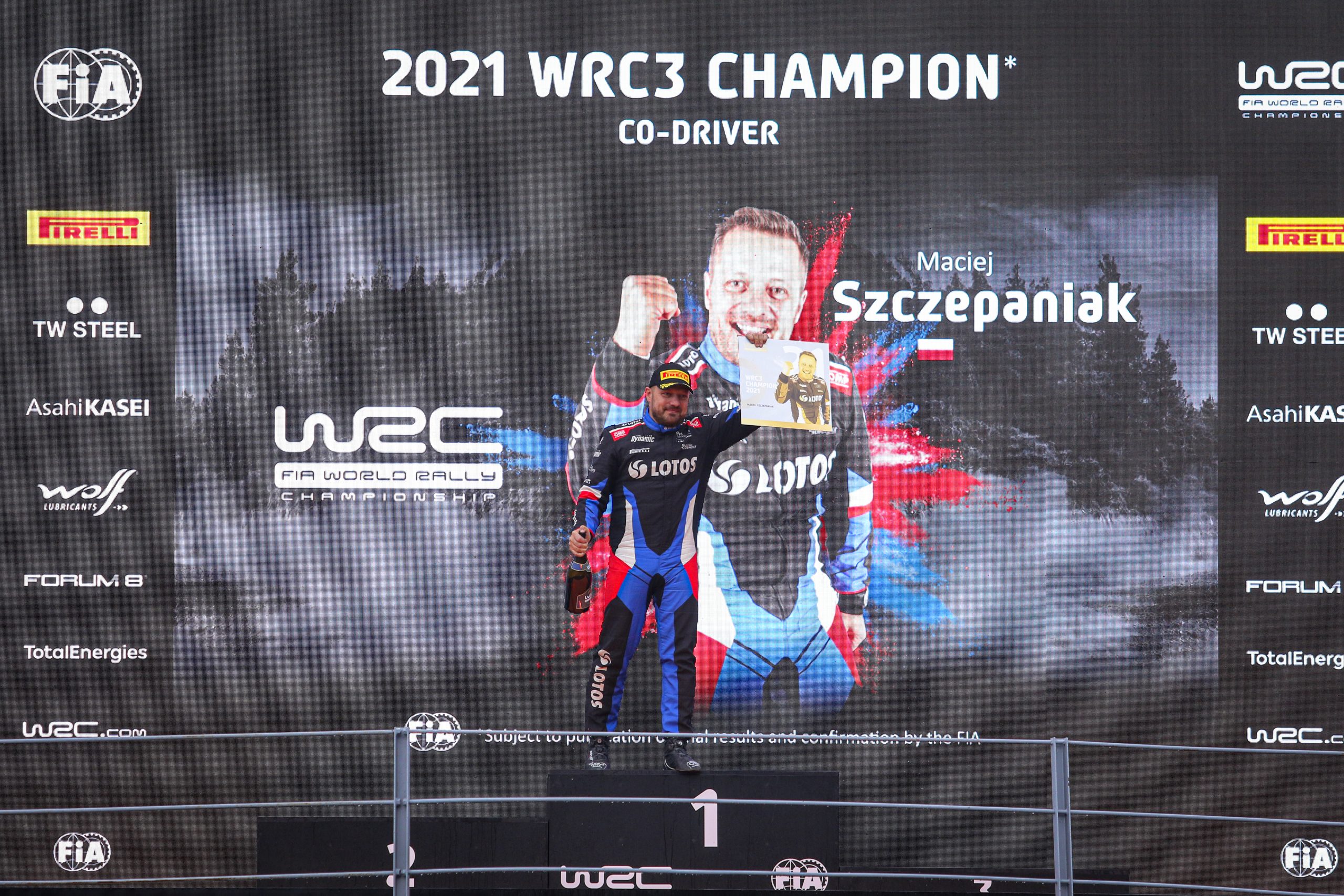 Pole is the world champion. The culmination of 26 years of passion, work and brilliant memories

Although Kajetan Kajetanowicz did not become WRC3 world champion, Maciej Szczepaniak, a member of his crew, enjoyed the title among pilots. This is a huge success after 26 years of racing, but Szczepaniak has not said the last word yet.

Even if it is the names of drivers that attract more attention among rally fans, their successes would not be possible without proper cooperation with pilots. They often agree to a secondary role, although their contribution to the victories is equally large. In the case of this year’s WRC3 season, we had an unusual situation in which Kajetan Kajetanowicz became the world runner-up among drivers, and Maciej Szczepaniak, who piloted him, won the championship in his category.

Where does this difference come from? The Lotos Rally Team crew lost the fight for the championship with Yohan Rossel, who changed the pilot over the course of the 2021 season. Meanwhile, Szczepaniak accompanied Kajetanowicz in all this year’s rallies and scored points for the “overall”.

“For me, the title of world champion is the culmination of 26 years of passion, work and brilliant memories,” wrote Maciej Szczepaniak in social media, after the Monza Rally won him the WRC3 world champion title among pilots.

The 47-year-old can undoubtedly be called one of the icons of Polish motorsport. He appeared on rally routes in the mid-90s. During his career, he cooperated with the best and fastest Polish rally drivers – Tomasz Kuchar, Janusz Kulig, Leszek Kuzaj, Michał Kościuszka and Robert Kubica.

Currently, a member of the Lotos Rally Team crew has 131 appearances in the WRC world championships. – The fight this season was very even and close. After seven rallies and thousands of kilometers, it all came down to one special stage. We started it with an advantage of 1.6 seconds. You cannot imagine how emotional it is for the drivers – Szczepaniak said after the Sunday rally.

Kajetanowicz and Szczepaniak were WRC3 world champions one stage before the end of the Monza Rally. Unfortunately, the last part of the Italian event did not go their way and they lost the decisive match against Yohan Rossel and Jacques-Julien Renucci.

The sweetness for Szczepaniak may be the fact that he became the world champion among pilots. As he emphasized, Kajetanowicz owes a lot to it, because “thanks to his incredible skills” he is able to experience great successes on rally routes.

– We lost the title as a crew, but they just won faster. I want to thank Kajetan, because my championship title among pilots is due to skills and driving. I wouldn’t have done it without him. We had a very good season in WRC this year, we fought great duels in every rally – added Szczepaniak.

Before the start of the Monza Rally, Kajetan Kajetanowicz said that he is at the stage of talks with sponsors and does not know what his starting plan will look like in the 2022 season. this year’s competition in Poland.

– We don’t know what will happen in 2022. It’s a bit early to make a decision. I hope to see you again soon – said Maciej Szczepaniak at the conference after the Monza Rally.

One Polish pilot is compatible. Just as Kajetanowicz considers the 2021 season to be the best in his career, his partner Szczepaniak sees the events of recent months similarly. – We had a strong start to the championship in Croatia and in fact, one bigger mistake in braking in Sardinia, where we were leading, and thus lost a few positions, cost us the title. This is what it looks like. However, out of seven rallies, we were on the podium six times. It does not look too bad – assessed the pilot of Kajetanowicz.

Perhaps the year 2022, after Szczepaniak won the coveted championship title among pilots, this time will bring Kajetanowicz a championship in the drivers’ classification. It is a long way from now. Much earlier, the Barbórka Rally will be held, which will be an opportunity for the fans from the Vistula River to thank the Lotos Rally Team crew for their huge success in the ending season. The competition is scheduled for December 3-4.

David Martin is the lead editor for Spark Chronicles. David has been working as a freelance journalist.
Previous From December, e-TOLL is compulsory on A2 and A4. It is an alternative to governmental applications
Next France. A bear shot by a 70-year-old hunter

For many years, there has been a heated debate as to who is the best …