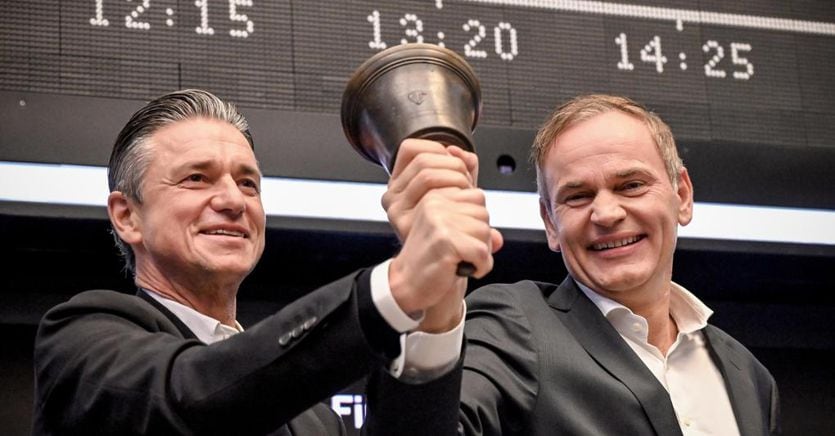 In a European stock market that is looming weak due to geopolitical tensions and winds of recession, the German sports brand Porsche marks a positive start on the Frankfurt Stock Exchange after the parent company, the Volkswagen group, has set the final listing price at the upper limit. fork. VW has in fact decided to sell the shares at 82.50 euros each (the minimum was 76.50), valuing the company 75 billion euros (78.5 after trading in the morning), the largest initial public offering in Europe, with a collection that reached 19.5 billion. The starting price was 84 euros (+ 1.8%) and then returned to the starting point and relaunched to + 4.6%, against the decline of the main index of the German stock exchange, the Dax (-20% in the past six months). Mediobanca is one of the advisors of the operation.

“Today is a historic day for Porsche,” commented Oliver Blume, CEO of the Volkswagen group since September 1 and of Porsche since 2015, in an interview with Bloomberg Television. «The first reaction of the market is very positive and this shows the potential of our company». And according to chief financial officer Lutz Meschke, the valuation of the brand, whose products will increasingly be aimed at an audience of the super rich (high net worth individuals) could rise to “over 100 billion by 2026”. For Arno Antlitz, chief financial officer of the first European car manufacturer, “the high level of demand demonstrates investor confidence in Porsche’s future”. Antlitz added that Volkswagen is not ruling out the already announced listing of the division dedicated to batteries for electric cars, now that the Porsche IPO has been completed. Also because the microchip crisis seems to extend to 2024 and the intention is to reduce waiting times for new vehicles as much as possible.

The listing of the manufacturer of the famous 911 and the (successful) electric model Taycan is a bold move, given the IPO slump in the year, with companies avoiding seeking new listings due to the European energy crisis, the increase in record interest rates and inflation. Companies raised less than $ 10 billion in 2022 through August, an 83% drop in revenue from the same period last year, according to Bloomberg data. Porsche’s listing is set to be the largest in Europe since Glencore raised nearly $ 10 billion in an IPO in London in 2011. In Germany, another IPO of similar value was Telekom’s in 1996.

Porsche is aiming for revenues of up to € 39 billion this year and a return on sales of up to 18 percent, up two percentage points from last year, the company said in July. During the placement of the shares, he indicated that he intends to push the accelerator on luxury products and services, as well as on electric cars. In 2030 it set itself the goal of reaching 80% of electric cars on total sales (145,860 thousand units in the first six months, -5% compared to the same period of 2021). The company is also working to achieve carbon neutrality of the production chain in 2030.

One of the critical points of the operation is governance. The two historic families Porsche and Piech with the holding Porsche Automobil SE have the majority of the voting rights in the parent company Volkswagen AG and in fact, thanks to the IPO, by winning a blocking minority in Porsche AG, they fall under full control of the Wolfsburg giant. after Porsche’s failed attempt in the mid-2000s to acquire Volkswagen, borrowing more than 10 billion euros. After four years of battle, VW paid 3.3 billion euros in 2009 to own 42% of the German sports car jewel. Another controversial aspect: Blume has also been CEO of the Volkswagen group for a month. A step that has not convinced all investors, who do not believe it is possible to hold the reins at the same time in Wolfsburg and Zuffenhausen (Stuttgart).

The variety offered by video games never ceases to amaze him. He loves OutRun's drifting as well as the contemplative walks of Dear Esther. Immersing himself in other worlds is an incomparable feeling for him: he understood it by playing for the first time in Shenmue.
Previous it is possible to spy on a turned off iPhone
Next Inter, Lukaku out with Rome and Barcelona: he returns with Sassuolo