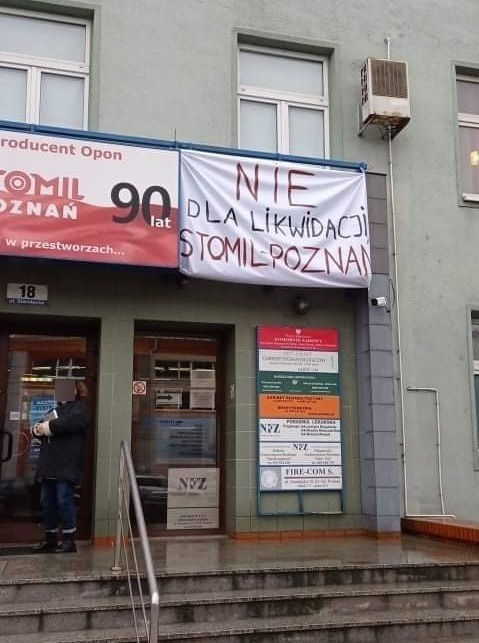 Poznań Stomil to be liquidated? 200 people can lose their jobs

Trade unions inform about the tense situation at the plant.

– I would like to ask the editorial office to publicize the matter related to the Stomil company, which has been on the market for over 90 years, and which at the moment Polska Grupa Zbrojeniowa together with the Waryński Group probably wants to close. Behind the employees’ backs, the above-mentioned companies reached an agreement on the land belonging to Stomil. The city council did nothing about it, just patted the investment, not taking into account the fact that there is work there, people want to work – a reader wrote to us.

According to money.pl, about 200 employees currently work at Stomil Poznań. 50 others have already been released or have left themselves. Trade unions are in dispute with the employer. Trade unions emphasize that the plant has something to do – it still receives orders for, for example, the production of tires or rubber compounds. The factory’s tires are sold mainly to the army, but also to the mining and construction industries.

In an interview with the industry portal, one of the trade unionists suggests that the plant’s management has received a lucrative offer from the main foreign recipient, which would require doubling the current production of the raw material. This would provide jobs for workers. But apparently the management board is not interested in signing the contract. There is therefore a fear that Stomil is about to be liquidated.

Trade unions indicate that the owners of the plant (the majority shareholder is Polska Grupa Zbrojeniowa) may receive around PLN 100 million for 13 hectares of land on which Stomil stands. In their opinion, a housing estate could be built on this land. The money, after paying off the creditors, would not allow Stomil to be moved to another location.

The findings of money.pl show that Stomil is currently indebted to over PLN 21 million, and one of the collaterals are mortgages in the areas where the plant operates. Polska Grupa Zbrojeniowa ensures that it does not want to let the plant go bankrupt, but restructuring decisions will be made at the general meeting. The situation is complicated by the fact that Stomil has environmental decisions allowing it to operate in this place until a maximum of 2024. It is not known whether Poznań officials will allow the plant to continue operating in this place. Trade unions indicate that in their opinion this is only an excuse to close Stomil.

The variety offered by video games never ceases to amaze him. He loves OutRun's drifting as well as the contemplative walks of Dear Esther. Immersing himself in other worlds is an incomparable feeling for him: he understood it by playing for the first time in Shenmue.
Previous Black Friday at RTV Euro AGD
Next Fabio Cannavaro changed his mind about the Golden Ball. “One of them will win” Football