“Seven months after the start of the war, we are much better prepared for winter” on the energy front. “Our stocks are 90% today, 15% more than last year.” This was stated by the president of the EU Commission Ursula von der Leyen.

“Now is the time to discuss how to limit spikes in energy prices and Putin’s manipulation,” he said the president of the EU Commission, Ursula von der Leyen, arriving at Prague Castle -. The second important thing to discuss is the level playing field, that is, that companies in each country have the same opportunity to participate in the single market, with equity. The third point is the RePower, and how to upgrade it. There will be no decisions today, being an informal Council but it is in preparation for the October Council “.

“The Commission had proposed a gas cap in March but at the time it was not attractive – explained von der Leyen -. But now the situation has evolved and the Member States now want to discuss the price cap. I trust that a solution can be found. “.

“We are returning to talk of reconstruction, there will be a big conference in Germany for a reconstruction plan. On Ukraine there is great unity, many complained about a more aggressive Russian propaganda in their countries “. Thus Prime Minister Mario Draghi in Prague.”On energy, things are moving. The Commission will present to the Council on 19 October a proposal in which the three elements – trying to lower prices, having an element of solidarity in the mechanism and starting the reform of the electricity market – will be“the premier specified. “I agree with the proposal of Gentiloni and Breton. There were similar proposals even 5-6 months ago. It is a very natural proposal, especially after the German decision. This is what is needed to put all countries, both those that have fiscal space and those that do not, on an equal level. ”Prime Minister Mario Draghi said this in Prague.

“Any intervention aimed at” gas “prices on the market automatically raises questions about the security of supply, so we need to discuss these things very carefully.” The German Chancellor said so Olaf Scholz at the end of the informal EU summit in Prague. “We all agree that gas prices are too high and we need to discuss with Norway, the United States, Japan and Korea how to lower them,” she added.

“Our citizens are asking for solutions, they have to pay their bills, and we have to give solutions, as for Covid”, said the president of the EU Parliament. Roberta Metsola entering the Prague Castle. “It is time to find common solutions and I am quite optimistic that we will find them,” she added. “I am very satisfied that, since February 24, the EU has shown unprecedented unity. Do we need to do more? Yes. Is there a risk of fragmentation? We have to prove that it does not exist”, she added. pointed out Metsola. “I would like to see an agreement on a cap, states do not compete with each other by making offers, we must not put different citizens on a different playing field”.

In his speech at the informal EU summit, Metsola reiterated that “we need a strong signal of unity. This is why a ceiling on the price of gas at European level is essential. We cannot bid higher than others. Many energy companies are doing so. huge profits on market speculation. Excess profits should be intended to alleviate the plight of households, SMEs and industries struggling with skyrocketing bills. My proposal is that we learn from the pandemic and, as with vaccines, we negotiate en bloc and stop price speculation“.

Vienna, however, holds back on the hypothesis of the price cap which “should not turn into a gas embargo from Russia”, as the Austrian Chancellor said, Karl Nehammer, however, he stated that he was in favor of negotiations to arrive at a Community solution to lower gas and energy prices.

Also in Prague for the informal summit of European leaders Prime Minister Mario Draghi. Support for Ukraine, the inflation dossier and the energy crisis are the main issues on the summit table, to which Ukrainian President Volodymyr Zelensky will link. 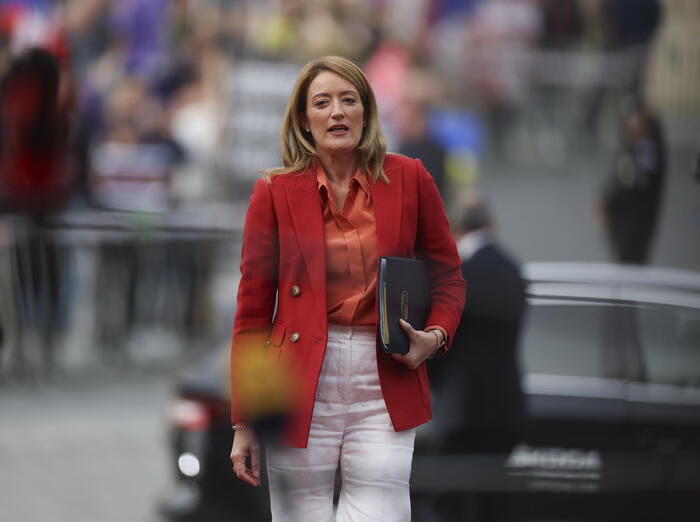 Kiev ‘needs heavy weapons and tanks. Member States can provide ‘the weapons’ given that Russia has implemented a new escalation and we must respond in a proportionate manner’. Borrell: ‘I will propose a new tranche for military aid for weapons support and training missions’ (ANSA)

“The technical discussion will go on, but if the European Commission puts on the table a proposal in view of the” EU leaders “summit on October 20 and 21, I think that by now the positions” between the countries “are getting closer”, he reiterated. the commissioner, however appealing to “not demonize” but to “also understand the positions of those who say ‘eye that with the roof on the price of gas we are left without'”. “In the meantime, however – he specified – we have stocks above 90% and we have reduced Russian gas from 40 to 7.5%, so that risk has greatly reduced in recent months”.

On the gas price ceiling “there are different interests and there are still different positions” between the Member States, “I believe that are approachingit took us some time even when the pandemic crisis occurred “.” I think it is high time that this divergence between those who ask for a ceiling on the price of gas and those who fear that this ceiling will cause a supply problem is it has been going on too long, and I believe that the European Commission is now ready to make a proposal, “he added.

“I think that” the idea of ​​new joint financing on the Sure model “will make its way, we have put a foot in the door to say that in the face of this situation” of crisis, the ceiling on the price of gas “will not in itself be a miraculous solution “and” common tools “will be needed, explained the European Commissioner for the Economy. “We will need more solidarity, the gas price cap is not enough because if everyone uses their money on their own, given the imbalances in our budget space, it is not enough”, he added.

“I don’t know if there is a clash, I don’t think so – he said Gentiloni answering a question about the alleged clash between the leader of Fdi, Giorgia Meloni, and the Prime Minister, Mario Draghi -. Italy has so far achieved the objectives it had to achieve on schedule. It is one of the two countries for which the Commission has already given a favorable opinion on the second disbursement, the other is Spain “.” So far the times have been respected “but” it is a race against time “which” must continue . The urgency is there, but there are no delays at the moment “, she highlighted.

Videogames entered his life in the late '80s, at the time of the first meeting with Super Mario Bros, and even today they make it a permanent part, after almost 30 years. Pros and defects: he manages to finish Super Mario Bros in less than 5 minutes but he has never finished Final Fight with a credit ... he's still trying.
Previous The defender of Cremonese sure about Kvaratskhelia: “He has everything to succeed!”
Next Maverick breaks the Billion Wall at the Box Office