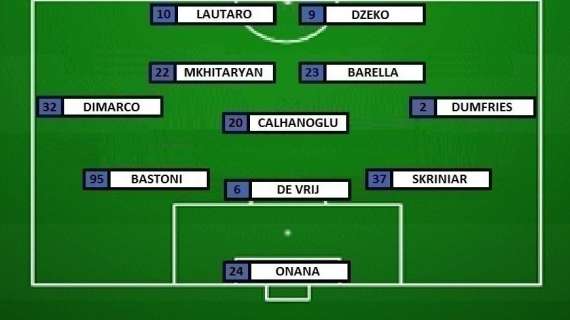 Preview Inter-Sampdoria – De Vrij from 1 ‘? Doubts about the flanks. And Lukaku paws

Archived the Champions League chapter with the mission accomplished against Viktoria Plzen, Inter is retuning to the frequencies of the championship with the aim of continuing the ascent, trying to re-enter the championship race. Today the opponent is the Sampdoria of the former Stankovic, but the Nerazzurri will not be able to take care of the great friend given the urgency of the table.

HERE INTER – Compared to Wednesday’s match, Inzaghi should relaunch De Vrij from the start in place of Acerbi, while we move towards the confirmation of the midline with Calhanoglu as director in the midst of Barella and Mkhitaryan. Usual doubts about the side lanes: Darmian and Gosens try to undermine Dumfries and Dimarco but they remain favorites. In attack, however, Dzeko and Correa are competing for a jersey to play alongside Lautaro, with Lukaku on the bench ready to put more minutes in his legs after Wednesday’s. Only Brozovic remains out, hoping to return to the squad for Tuesday’s match against Bayern Munich.

HERE SAMPDORIA – Some training doubts for Stankovic, fresh from the victory in Cremona (before the Genoese in this championship). Amione and Augello, in defense, take the lead over Ferrari and Murru. In midfield, however, the challenge for a jersey is between Verre and Sabiri. Ko Quagliarella joining the list of unavailable. The former Murillo has been recovered.

David Martin is the lead editor for Spark Chronicles. David has been working as a freelance journalist.
Previous here’s how long it lasts if you finish it at 100% – Nerd4.life
Next Brexit, political stalemate in Northern Ireland over party vetoes on the protocol. London: “Forced to call new elections”