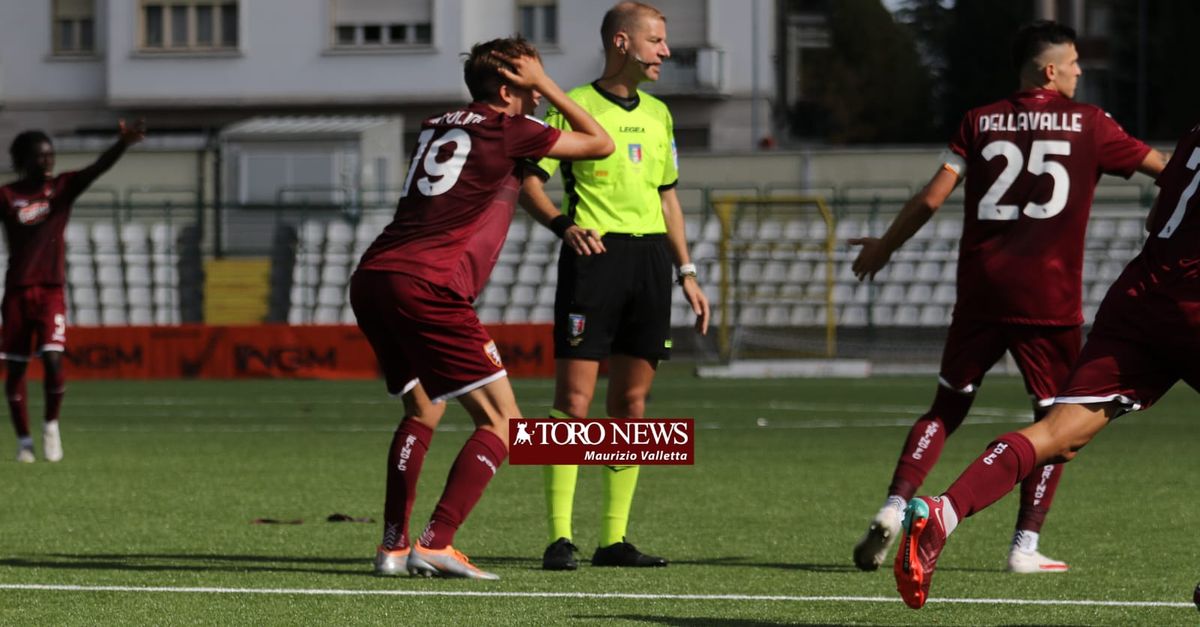 Torino loses a derby already won: after going on 3-1, the bulls go on 3-4. Great disappointment for this sensational comeback

The Torino Primavera throws the Mole derby to the winds. After a first half finished 3-1 for the grenades to win in the end is Juventus 4-3. Great comeback from the bianconeri in the second half, during which the grenade lost a derby practically won. In the first half, in fact, Scurto’s team was much better, who in the second 45 minutes let a victory slip out of his hands that – as seen at the beginning – would have been well deserved.

The most important news at Toro concerns the starting debut of Dell’Aquila, who for the first time since he arrived plays from the first minute despite not being in the best conditions. The other news concerns Anton, who starts from the bench. In defense there are Dembele and Antolini full backs, while central N’Guessan and Dellavalle. In the middle, Weidman and Gineitis play together with Ruszel. offensive trident instead made up of Dell’Aquila and Jurgens outside, while the first striker is Caccavo.

Toro starts well, waiting for Juventus, making density below the line of the ball and putting the Juventus offensive phase in difficulty. So the first chance is for Scurto’s grenade with Jurgens, who kicks from a tight angle and Daffara rejects with some difficulty. The way of interpreting the game often puts the Montero team in difficulty, thanks also to the skill of the grenade to often be able to anticipate the bianconeri. At 9 ‘from such a situation the Bull takes the lead. After a recovery ball on the trocar, the ball arrives on the right where Dell’Aquila serves Dembelé who puts in the middle where Caccavo clearly anticipates Dellavalle and signs the goal of the advantage. A goal that gives even more morale to Scurto’s boys who shortly afterwards come close to scoring twice within a few seconds. First Jurgens sends Antolini deep, who kicks late and Daffara sends out for a corner; then from the resulting corner Gineitis with his head touches the post. Juventus’ response is immediate with Hasa, who tries from a distance and finds the excellent response from Passador. At 21 ‘the Toro then doubles. Once again the grenades start again after having recovered the ball this time with Dell’Aquila, who is good at serving Gineitis centrally. The Lithuanian then serves Jurgens in depth, who holds the punch and bags. The game reopened shortly after, because from a cross from the left by Mancini N’Guessan tries to anticipate everyone, but deflects the ball into his own goal. The grenades, however, want to win the derby at all costs and not even a minute later Toro goes on 3-1. Ruszel throws perfectly deep for Jurgens, who protects the ball and returns to the right, then drawing an impregnable parable for Daffara. Winning round shot and grenade again with a double advantage. In the first half final, Juve is close to scoring. Turco is primed face to face with Passador, who is very good with an open hand in rejecting the shot and the grenade is saved. It is the last act of an excellent first half by the grenade.

At the start of the second half Montero tries to raise the technical level by inserting Nonge for Doratiotto and the choice rewards him, because at the start of the second half the bianconeri seem more on the ball. Then at 57 ‘Scurto ran for cover giving more solidity to the grenade midfield by inserting Ciammaglichella for Caccavo. The biggest risks, however, the grenades take them out, because Scurto’s boys always try to keep the ball and dribble, but Juventus raises the pressure well and puts Toro in difficulty. The first real scoring ball of the second half, however, is for the grenade. Dell’Aquila sends Jurgens open field, who resists the pressure of Lorenzo Dellavalle and face to face with Daffara finds the post. Wrong goal, goal conceded. Shortly after Juventus reopens the game with Yildiz who deposits an easy tap on the net. Despite the difficulties, the grenades touched the goal once again around the 75th minute, when Dell’Aquila stole the ball from Juventus’ Dellavalle and instead of aiming for the goal, he looked for a dig from outside the area to surprise Daffara and did not find the door. On the overturning in front, Juventus equalized the score. Dembele fouls Turco and Huijsen shows up from the spot, bringing the Bianconeri to a draw. The game thus changes. Juventus pushes hard and so in the 81st minute the Juventus overtake arrives. On a free-kick from the left, Dembelé misses the header and Ciammaglichella loses the insertion of Yildiz who heads into the net for the 4-3. A huge cold shower for the grenades who had finished the first half with a well-deserved double advantage and at the end of the race they find themselves chasing. In the last few minutes the Taurus shows up with insistence forward without becoming really dangerous. There remains a doubt about a possible penalty, with D’Agostino kicked in the area, but for Maggio there is no penalty. In the end Juventus wins and surpasses Toro in the standings, who let the derby and the possibility to stretch out of his hands.

David Martin is the lead editor for Spark Chronicles. David has been working as a freelance journalist.
Previous Car, you all have this amazing device: nobody knows they have it
Next Russia-Ukraine, energy and recession: the alibi of the perfect storm