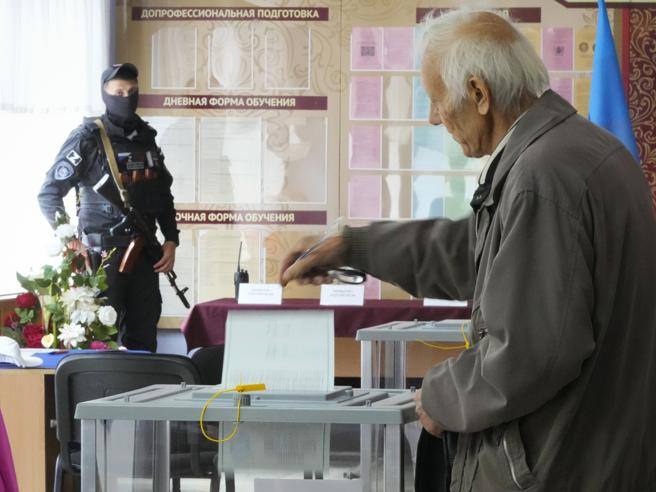 Referendum in Donbass, what Russia was asking for and what is changing now – Corriere.it

Results disclosed. The vote for the annexation of the occupied territories was set for 4 October

Referendum, according to Moscow. Farce, according to the world. After seven months of military invasion and now that 95% of the voters said yes to the annexation
– in territories where people voted with the gun pointed and most of the inhabitants have left -, Russia is expanding its borders. Exactly as he did in 2014, after the announcement of the results in Crimea. Only then there was no war going on and it was celebrated with fireworks and street parties: the international community limited itself to sanctions. This time, Putin’s Anschluss game is all to be played.

– Here the news on the war today, September 28th


What did the referendums ask for?
The questions were different. To the self-proclaimed people’s republics of Donetsk and Lugansk, the first two regions of Donbass occupied militarily on February 24, were calling for integration into the Russian Federation. There had already been a referendum in 2014 and, with an armed secession, independence from Ukraine had already been proclaimed in 2014, with the signing of a mutual assistance agreement last December (and formally, it was their leaders who ask for Russian military intervention in February). Zaporizhzhia and Khersonconquered by Putin after seven months of war, instead asked for both the secession from Ukraine and the annexation to Russia, without even going through a fictitious proclamation of independence.

With the predictable proclamation of the results, the Ninth District of the Russian Federation is born, which therefore includes five areas: Donetsk, Lugansk, Zaporizhzhia, Kherson and the Crimea. Moscow will soon give a name to these annexed regions which, in Putin’s will, will become Russia in all respects. On Friday, the Russian president will speak to the Moscow Duma and will likely officially announce the annexation. On 4 October, unsurprisingly, the vote of ratification of the Upper House was set. Putin would also have identified his special envoy in the area: Dmitry Rogozin, leader of a right-wing party, former director of the Russian space agency and former ambassador to NATO (here the insight into the 13 Italian observers of the farce referendum).

What changes in the occupied territories?

According to the Ukrainians, nothing: Let’s go ahead with the counter-offensive to free our regions, says the foreign minister, Dmitro Kuleba. According to the Kremlin spokesman, Dmitry Peskov, everything changes: Internal laws, international relations, security. The latter is the key word at the moment: according to Russian military doctrine, a law that Moscow updated two years ago, the Ukrainian counter-offensive in the invaded areas now becomes an aggression against Russian sovereignty, with the consequence that Russia will be able to use every means (including nuclear weapons) to defend the territory. The Special Military Operation, in the logic of the Kremlin, thus turns into a defensive war. And the new Russian citizens of the four regions are called to enlist, in the partial popular mobilization, just like everyone else. The precept postcards have already left: (ex) Ukrainians forced to fight against Ukrainians.

How much of Ukraine does Russia now control?

The four annexed regions, together with Crimea, make up in total 15 percent of the Ukrainian territory. But Moscow does not control everything: in Zaporizhzhia the Russian army dominates the region, but not the capital; in Kherson, it has invaded the great centers but not the countryside. Also in Donetsk and Lugansk, there are still disputed areas. Only Crimea, occupied in 2014, firmly annexed to Russia and connected by the Kerch bridge that Putin had built after the Anschluss and that the Ukrainians, in a future and for now impossible to negotiate, want to be demolished.

How will the international community react?

At the moment, no one recognizes this annexation. Not even countries that have always been loyal to Moscow, like Kazakhstan or Uzbekistan. Only the Belarus of the dictator Lukashenko and two puppet-states born from secessions armed with pro-Russian and isolated from the world, see Abkhazia and Transnistria, they said they will accept the new Russian borders. A condemnation resolution was presented to the UN Security Council, the first signatories of Albania and the United States, but the power of Moscow’s veto makes it impossible to approve: it would be a signal, for, if China and India ‘s abstained. Many things could change, however, in every sense: not even the referendum for the independence of Crimea was recognized at the beginning, but gradually different governments – from Cuba to Nicaragua, from North Korea to Syria – ended up aligning themselves. How much will the harsh response of the West weigh this time?

Videogames entered his life in the late '80s, at the time of the first meeting with Super Mario Bros, and even today they make it a permanent part, after almost 30 years. Pros and defects: he manages to finish Super Mario Bros in less than 5 minutes but he has never finished Final Fight with a credit ... he's still trying.
Previous Inter, all against Zhang who is not there: the recapitalization is ready
Next Tv Programs Tonight Thursday 29 September 2022: Live movies not to be missed