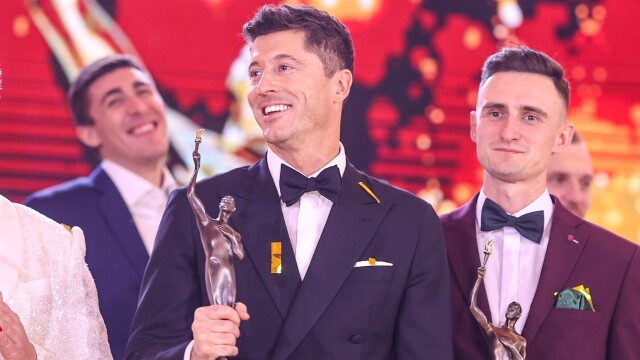 Tomala at the Olympics delighted. He sensationally reached the title in Japan on the murderous distance of 50 km, competing in this competition only for the second time in his career. Lewandowski was also impressed by his success – as he himself said -.

The gentlemen met on Saturday evening in Warsaw. Receiving the statuette for the fourth place in the 81st Plebiscite of “Przegląd Sportowy”, the walker told about the “ToMAli Zwycięzcy” foundation he founded, supporting sick children and those from orphanages. He announced that he would be submitting the gold medal to an auction to raise funds for the operation of 12-year-old Kacper, suffering from cerebral palsy.

Tomala: We are on the same wavelength with Robert

Lewandowski, who triumphed in the plebiscite, got interested in the matter right away.

– We were invited to a joint interview and during the interview a question was asked what would we “take” from each other. Robert quickly replied that he would like an Olympic medal. What I, therefore, invite you to the auction, here, on the spot, in the hotel, will start soon – recalls Tomala.

The footballer could not stay – he rushed to the airport, returned to his duties in Bayern Munich, but promised that his representative would take care of everything. He kept his word, and through it he offered 280,000 zlotys.

– It was a shock. Still there, admits the Olympic champion. – You could say that it was a coincidence that it all started with this joint interview. But I don’t believe in cases. Robert is a superhuman, we are on the same wavelength. I felt with him like a friend whom I have known forever.

“He announced that he would give it back to me”

The case now is that Tomala has just flown to a camp in Portugal, Lewandowski is in Munich, and Olympic gold either in Warsaw or on his way to a new owner. New – as it turns out – not for long.

From excavators and forklifts to Olympic gold. “After work I fell asleep in a second” – INTERVIEW WITH DAVID TOMALA >>>>>

“I hope this gold will help someone else”

“ToMAli Winners” is just starting to function. However, Tomala has been involved in charity work for four years, more or less. His uncle works with young people, let’s say the difficult one. Dawid helps, together they organize sports competitions for girls and boys. They show that sport can change something in life and achieve something with it. Characters can be really difficult, but on the pitch or track, this character can be very useful at times.

The master already receives hundreds of requests for help. – For Kacper’s operation, 140,000 were needed to start walking. Thanks to Robert’s generosity, we have twice as much, so we will be able to spend this money on other children relatively quickly. Details, if someone is interested, can be found in my social media – he says.

What next with the gold that will return to him from Munich? – Oh, I don’t know yet. I’m really shocked. I hope it will help someone else – says Tomala.

David Martin is the lead editor for Spark Chronicles. David has been working as a freelance journalist.
Previous New trends on the housing market – what do Poles expect?
Next Biden is silently arming Ukraine. In 2021, he spent $ 450 million on this.