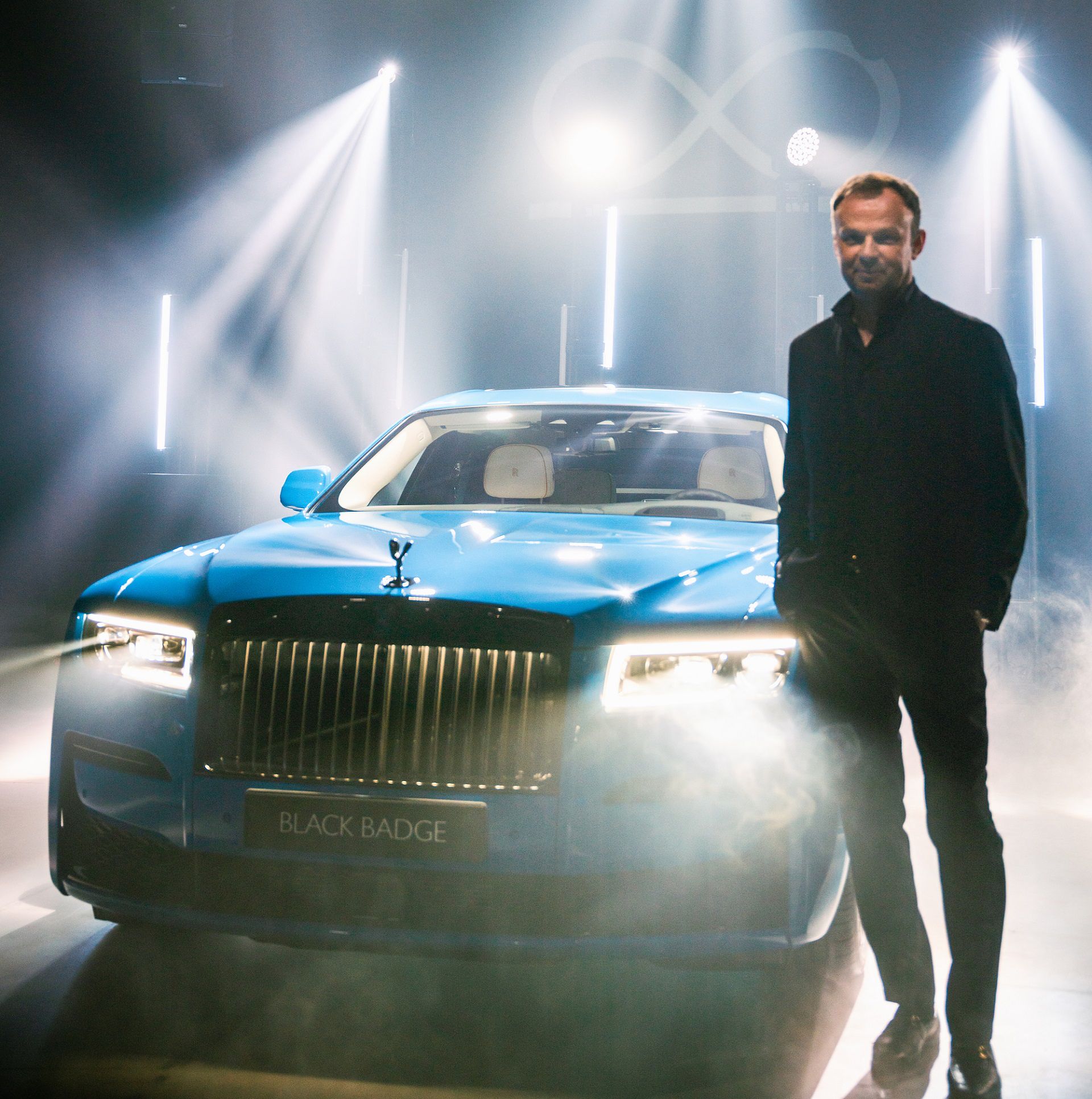 The world as we know it is undergoing historical changes. And few facts illustrate these changes – not only automotive – in such a blunt way as the Black Badge model line offered by Rolls-Royce. The British themselves call them the “dark alter ego” of the current offer. In practice, this means that the cars of this series are distinguished by harder chassis settings, more power or even & hairsp; – & hairsp; attention, attention & hairsp; – & hairsp; engine sound. In short: everything that was NOT about this venerable brand during the first 100 years of its existence.

In this respect, the new Rolls-Royce Ghost Black Badge may seem a shocking car to conservatives. The very second generation of the Ghost model is an unprecedentedly progress-oriented design: on board we can find, among other things, laser lights and modern multimedia. The Black Badge variant added to this repertoire even tougher suspension settings, a gearbox that can jerk when driving dynamically and a tad more power (29 HP).

Not that the Spirit was lacking power before. Ghost Black Badge with the help of a powerful V12 engine with a capacity of 6.75 liters generates all 600 hp and atomic 900 Nm of torque. In this way, this majestic limousine, which is over 5.5 meters long, which the manufacturer himself describes as “minimalism in an extreme form”, accelerates to 100 km / h in 4.7 seconds and can go up to 250 km / h. The rear passenger can observe it all from the perfectly soundproofed cabin with deep merino wool rugs and a champagne cooler.

How does one drive such a car? I have already written about it, as Autokult & hairsp; – & hairsp; as the only Polish automotive editorial office & hairsp; – & hairsp; was invited to drive this model before its official premiere, during a secret event in Great Britain. You can read about my Rolls-Royce Ghost Black Badge test by clicking on the link below. The Polish event was a pretext for me to learn first-hand from the person who runs the Polish Rolls-Royce showroom what the adoption of this still surprising and unusual model line looks like in our country. Who buys such cars and why? Are they only chosen in black? The answers may surprise you.

Mateusz Żuchowski: The decision to introduce the Black Badge line to the offer was a step into the unknown even for Rolls-Royce himself. How was it received in Poland?

Piotr Fus, Rolls-Royce Motor Cars Warsaw: The average age of customers in Poland is above average. In other European countries or, for example, in Turkey, this average is over 60 years. It is 50 years in Poland. Models from the Black Badge line are especially popular among customers at this age. I already have several orders for the car presented today.

M.Ż .: Why do these people choose the Black Badge variant?

PF: Not only because it’s stronger or faster. What matters to many customers is that this is the best model of the brand that can be bought right now. They see it as the pinnacle of Rolls-Royce’s capabilities. From our perspective, we are still talking about a simply different, more sporty variant. Each client can decide for himself whether he needs such impressions.

The world is moving more and more towards electric motors, but in Poland the V8 and V12 engines still dominate. Large engines are included, power is included. There are customers on the Polish market who want to manifest their attitude to the world by choosing electric cars, but at the same time we also have a relatively large group of traditional automotive enthusiasts.

It is also worth noting that the Rolls-Royce 6.75 l V12 gasoline engine meets all the latest exhaust emission standards. Nowadays, it is an achievement that affects the exclusivity and price of this model. It is possible to meet the stringent exhaust emission standards with such a drive, but it requires the use of the most sophisticated and advanced materials and technologies. This is an achievement that puts Rolls-Royce in a unique position in the overall market.

M.Ż .: So what has the Black Badge line changed from the producer’s perspective? Has it managed to expand the group of recipients or rather keep up with the changing trends?

PF: We have a group of customers who do not drive these cars themselves, and the technical composition of a model like Ghost Black Badge is not something that suits their needs. They don’t need their Rolls-Royce to be faster or sportier tuned to be heard. However, the group of customers who sit at the controls themselves is constantly growing and for them every 29 HP makes a difference. There are also people who think that if there is already one copy of this model in town, then they must be in the Black Badge version. This is how human nature works at every level, and it will not change.

This is not a Polish feature. Rolls-Royce Motor Cars Warszawa for many years was responsible for servicing this brand in neighboring countries. The customers are the same people there. For example, they are interested in what their friend or some famous character bought. Of course, I cannot tell them. Our goal is to make sure that each of these demanding customers feels satisfied.

M.Ż .: I treat the Black Badge line not only in terms of the market, but also as a social event. For me, her presence proves that the way of using luxury is changing, also in Poland, and thus the nature of customers, for example Rolls-Royce.

PF: It’s true. Rolls-Royce customers are increasingly driving their cars alone. They expect all the novelties, such as Apple CarPlay or Spotify, to be in them, because they simply use them. How this market is changing is evidenced by, for example, the cars that came to the Polish premiere of Ghost Black Badge. Despite the name, cars from this line do not have to be black. As you can see, they are even available in bold colors like the Galileo Blue present here.

It used to be said that a Rolls-Royce was such an ancient car, so fossilized in British. Today it’s a completely different brand. I have already sold cars in Poland in such color configurations that it is hard to imagine. Even a copy in this blue color.

M.Ż .: Contrary to appearances, it is difficult to find new Rolls-Royce in boring colors. Where does this greater tendency of Polish customers of this brand to make more extravagant choices than in the case of ordinary cars come from?

PF: Rolls-Royce cars run in completely different market realities. In the case of production cars, even in the premium segment, colors and equipment are often chosen carefully due to their residual value. The customer plans to operate for several years, after which the financing ends or he plans to sell. The original color greatly complicates such a plan.

It is different for Rolls-Royce customers. They just don’t plan on selling their cars. When we choose the configuration together, I know that this car will stay with them forever. These are cars that are bought for very personal reasons and that connect with their owners important events in their lives.

Someone bought one for the birth of a child or grandson, someone took their son to the wedding in his car and now the children are happy about a successful marriage. These cars become the owners’ amulets or their showpiece. One of my clients chose a very distinctive & hairsp; – & hairsp; color for her Rolls-Royce, the same as her nail polish. Now he can’t imagine anyone else driving this car.

Rolls-Royce models even have a different production cycle than regular cars. Even large limousines of brands such as BMW and Mercedes-Benz change every 5-6 years. Ghost and Phantom have been in production for much longer. These realities, unique in the scale of the entire market, make the residual value of these cars even incomparably higher. They never get cheaper, and often get more expensive at an impressive pace.

When a second-hand car appears on the Polish market, it is rather one of the older models. It immediately becomes very sought after among a narrow group of customers of this brand. One of these cars appeared in our showroom and I sold it to Krakow. Since then, this car has changed owners three times and each of them earned a good profit on this car.

So we have a bit of a shortage of used cars, because none of my clients – and I already have some – wants to sell me back Rolls-Royce from their collection, but buys more. Why do they need the money they earn from selling this car? They will not change anything in their lives anymore. It makes my job difficult, but I am happy because it shows that Rolls-Royce cars in Poland are not bought by people by chance.

M.Ż .: So who are the Polish customers of Rolls-Royce? How large group of recipients are we talking about?

PF: These people are in Poland, but they care about their privacy. I often visit clients for meetings, not them to the salon. We talk a lot with each other, which translates into personal relationships that definitely do not end at the very moment of selling the car. They are people from all over the country, not only from Warsaw, but also from other cities, even very small towns.

These are people from families who have been building their estates for many generations, who pass on not only their companies, but also values ​​and work culture with each subsequent generation. We have inventors in Poland who have built their position on the basis of patents that are used all over the world. We have producers of such things in Poland and on such a scale that we cannot fit in our minds. We also have clients with very simple businesses. What they have in common is the fact that they are very hard-working people. These are people who are living and honest proof that hard work pays off. They prove how untrue is the saying that once used in Poland that “the first million is to be stolen”.

Now they buy a car of this brand to mark their place on Earth by & hairsp; – & hairsp; as I call it & hairsp; – & hairsp; Rolls-Royce cars are not cars that are bought by people on the “pawn and put yourself” principle. The Ghost model that we can see here costs from about PLN 2 million and up. People who choose them also have planes that cost several or several dozen million euros. The purchase of such a car is definitely not the end of their financial possibilities.

The variety offered by video games never ceases to amaze him. He loves OutRun's drifting as well as the contemplative walks of Dear Esther. Immersing himself in other worlds is an incomparable feeling for him: he understood it by playing for the first time in Shenmue.
Previous Sims next door in The Sims 4 will finally make their own decisions
Next Sensation! Napoli is losing in the Europa League! The worst-case scenario for Legia Warszawa Pi³ka soccer