PERUGIA – We at vivoumbria.it like big minor sports that have good stories to tell. So, today, we tell you about the celebrations for the 40th year of activity of Sakura Judo of Ponte San Giovannithe Ponteggian company founded by the master Robert Sabatiniwho made headlines this weekend as well, winning the 37th Csen National Championship.

“A very important victory for the club – explains the press release – which for three consecutive editions (excluding the one in 2020 not held due to Covid) has placed itself on the top step of the Judo kermesse of the most important Sports Promotion Body in Italy. Last weekend on the tatami of the PalaGolfo of Follonica, in a weekend of competitions masterfully organized by maestro Franco Penna (national manager of the Judo sector of Csen) and by maestro Roberto Fortunati (organizational manager of the Judo sector of Csen), the Ponteggian judokas they faced each other with the same weight, age and belt from all over Italy (around 1400 athletes for over 110 teams), starting right from the youngest age categories in terms of competition, the Esordienti A (born in 2010) , up to the masters (Over 30-Under 65), in a race that therefore involved the entire company in the round. A long and demanding two days but which saw both the Cup as the best club of the day on Sunday (Cadet, Under 23, Senior and Master categories) delivered from the hands of maestro Penna to those of maestro Sabatini, with a good 74 points advantage on the second classification, and the one for the final victory which delivered the title of absolute champion Csen. Yet another proof of how the level in the Perugia gym is growing, thanks to the work of all the staff, in particular on the pink side thanks to the JuDonna project, a prerogative of the club, it should also be noted that all the Sakura teachers have risen on the tatami to compete bringing valuable points to the team. Antonio Liotta and Brunon Zdwitowiecki were also present to give a hand to their teammates, who did their utmost not to miss their assistance.

“It was a 2022 full of satisfactions – comments Maestro Sabatini – having fully resumed activity after the Covid period and seeing the gym full of small and large practitioners is priceless. Follonica’s victory is the tip of the iceberg of the work done during this year by the entire Sakura group. A big thank you therefore goes to all the staff of the company, to the guys who spared nothing on the tatami, to the friends with whom we collaborate such as Cus Perugia, the Judo Club Città della Pieve, the La Dolce Arte Club and Samer Ascensori and finally to maestro Penna, and his staff, once again the tireless engine of Csen. Now the latest effort, with Michele Baldassarri, Francesco Brunori and Federica Faraone who will take part in the Italian Absolute Fijlkam Championship in Turin in the Cus Perugia jacket over the weekend”.

Satisfied with the result, all the management made up of maestro Sabatini, the president Daniele Calzoni, Andrea and Antonio Liotta, Gianni and Roberto Mastriforti, Michele Baldassarri, Federico Sabatini and Luciano Todini.

Like any good story, there are protagonists to put in the opening credits. Here they are. 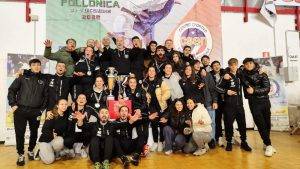 David Martin is the lead editor for Spark Chronicles. David has been working as a freelance journalist.
Previous English footballer brings a gaming setup with monitor to play Fortnite – Multiplayer.it
Next Olivia Wilde refused to appear nude in Ryan Reynolds film