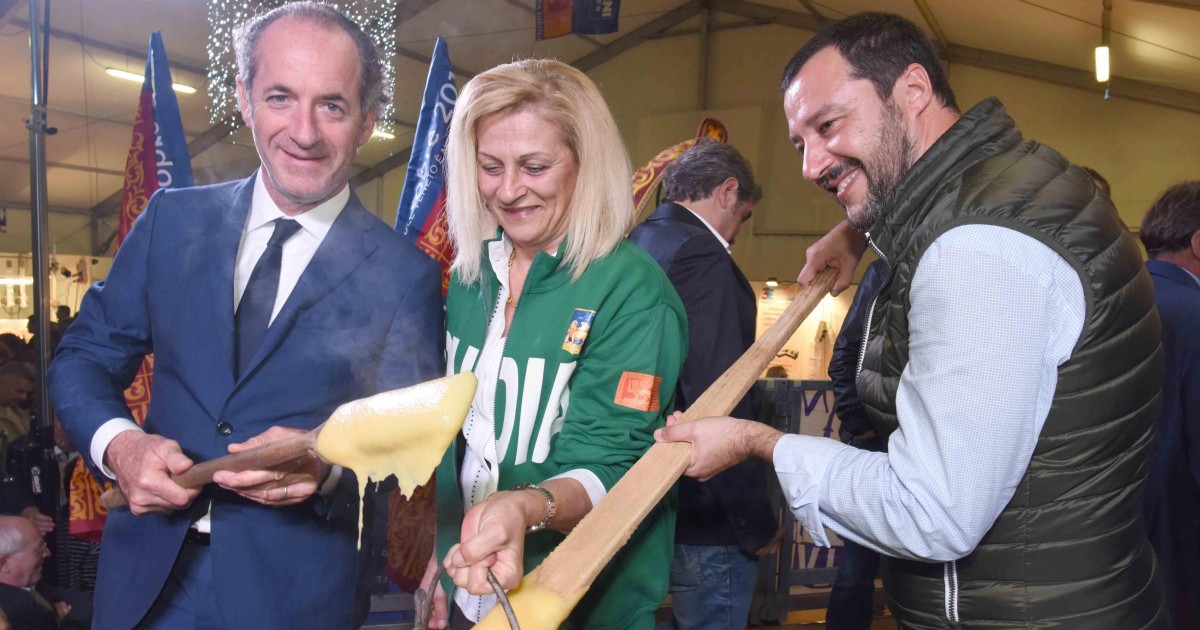 “Salvini captain? Of misfortune, the Divine Otelma is more credible”: the Northern League base in revolt in Veneto. “Zaia? Out of the p … or over at Papeete”

The Northern League’s belly is boiling. Insults. You can’t digest the electoral meltdown. And she looks in amazement at the lack of reactions in the face of the unbearable lightness with which, after the tsunami that swept away the strongholds of the party: the secretary Matteo Salvini he said he had won, that he was eager to rule for the next five years, that he was only disappointed with 9 per cent of the vote, but that he did not want to take a step back. In Veneto the world came down: those who went to sleep convinced that they lived in a land with a majority of the League, woke up to discover at the top of each bell tower a flag with the Flame Tricolor. Fratelli d’Italia is worth twice as much as the League. In the neighbor Friuli Venezia Giulia is worth triple. Despite the most severe defeat, the federal secretary replied without making any self-criticism to the former Lombard secretary Paolo Grimoldi (“Dignity requires resignation”) or to the former Venetian secretary and now MEP Gianantonio Da Re (“A defeat, Salvini must resign”): “My mandate is in the hands of the militants, not former parliamentarians or two regional councilors …”. Faced with these responses, the militant base feels abandoned, confused. And it is unleashed against the entire ruling class. Roberto Marcatoregional councilor of Zaia, on his facebook page invited Salvini to draw conclusions: “The League must immediately organize the congress, if this does not happen someone will have to take responsibility for having killed a dream ”. The fuse ignited the fireworks: dozens of red-hot interventions have sprung up under the post, all with name and surname.

Change the head
“The press conference after a devastating defeat is a classic with unlikely excuses. Salvini spoke without saying anything ”. Another user, Francesco De Piccolihe adds: “We need to put the people back at the center of the concept of politics … After Salvini has decided to stay with Draghi, it will be difficult to regain trust”. Stefano Gnesotto he replies: “The problem is not that he got involved with Draghi, the problem is Salvini’s bullshit. One after the other!”. A very faithful one, Maria Casagrande: “I have been a League member for a lifetime and Salvini lost my trust when he ruled with the Cinquestelle and then worse and worse down to today”. Sarcasm: “Thank the Captain”. Epitaph: “Currently the Divino Otelma by Salvini… The time has come for you to get your balls out and take matters into your own hands or you will all go to serve Papeete cocktail“.

The clean up
Attack on the ruling class: “The defeat does not have a single father, but also many children who have thought about it to safeguard themselves“. Trust betrayed: “You have done nothing to try not to bring about this disaster. Go back to the origins, with humility, commitment and sacrifices ”. There are also those who criticize those who attack the secretary: “You also let yourself be photographed with him on the stage of Pontida… and then the posters in which also Zaia he was portrayed together “. It turns out a group photo – Captain And colonels – unable to predict the blow. A nostalgic: “Someone warned and advised you to restart from the Venetian League! “. A pure: “All of you who have not wanted to listen to people who are exhausted, you should have the seriousness to apologize and resign. People are tired of hypocrisy“. An anti-system: “All those who have a ‘golden carega‘given by the people, they didn’t give a damn about who voted for them, they too resign with Salvini ”. One attacks the minister Giorgetti: “It looked like his bedside rug… (by Salvini ed) “. Another defends him: “But Giorgetti didn’t make the mojito scenes or the t-shirt with Putin’s photo! “.

The governors
The alternative would be at hand. “May the Doge come forward” invokes a militant. Yet, since the person concerned is silent, another provokes him: “But Zaia saw the results? I see that he continues to publish everything except politics, well… ”. He alludes to the site of the governor who, the day after the vote, deals with farmers, visits an old trattoria and praises Vicenza’s healthcare. Another, addressed to Marcato: “Dear Roberto, maybe he is now with Zaia And Fedriga to review the secretariat! “. But not everyone agrees: “I’m not mistaken if I say that Zaia and Fedriga pushed because Salvini had to stay with the Draghi government… I don’t think it’s just the leader’s fault ”he writes Maximum Franzoni. “It was the political choices like that of joining the Draghi government that angered many leaguers. Zaia and Fedriga have to do mea culpa, much of this disaster is their fault ”. The official defender: “Salvini is honest and naive, he has trusted elements who have decided on a political line far from the territories for personal gain. Immediately a federal congress and re-discuss the roles of governors who incited hatred. Stones also know their names and surnames ”. A Northern League player on the same line: “I first to betray Salvini were all the governors and ministers … you voted for everything, restrictions, vaccine, green pass … at least Salvini has always put his face to it ”. Another no-vax lurking: “Zaia & c… two inoculators greenpassiani who ghettoized the north… miserable ”.

The recipes
What to do? Innocent Azzaliniaddressed to the councilor Marcato: “Knock your fists on the table… And, if necessary, refound the old one Liga Veneta de conejan (from Conegliano, ed). We cannot leave the movement to captain of doom“. Or: “Work well and chat less”. In any case, he says Simone Rossi in dialect, “Tireghe and recie to those sora de you…. but strong strong… e ga to become like an elephant… ”: Pull the ears of those above you, but loudly, they must become like those of an elephant. “An immediate congress is urgently needed – cut short Maurizio Poltronieri – But the national secretary does a deaf ear. After this ‘Caporetto’, frankly it is no longer tolerable ”.

Regret
At the end of the speeches, the Venetians have a great worry. “We have been waiting for autonomy for five years – he reflects Gianpaolo Ventolini – we Venetians are polentoni, but we do not let ourselves be taken for ic …… i!!! “. “Now one will command us Roman, a defeat for us Venetians “. “And think, da Thieving Rome a Roman who commands … what an end pores Veneti – intervenes disheartened Nicola Brugiolo – I’m afraid that now autonomy we can forget it “.

Videogames entered his life in the late '80s, at the time of the first meeting with Super Mario Bros, and even today they make it a permanent part, after almost 30 years. Pros and defects: he manages to finish Super Mario Bros in less than 5 minutes but he has never finished Final Fight with a credit ... he's still trying.
Previous Genoa, Portanova: ‘I’m not a rapist. I will be acquitted. But in the meantime I lost the national team ‘| Other Italian championships
Next Scarlett Johansson on why she and Colin Jost named their son Cosmo