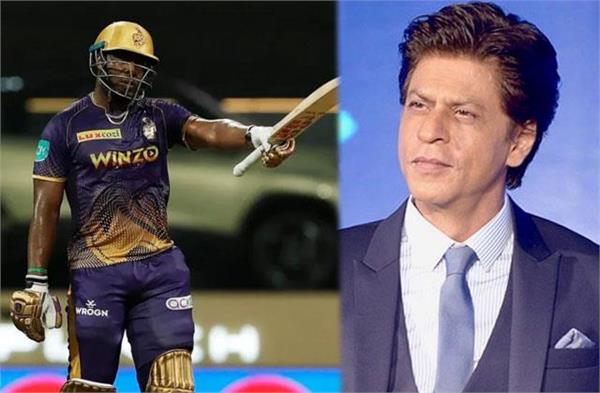 Sports Desk : Andre Russell played a scintillating innings against Punjab Kings to help Kolkata Knight Riders register their second win in the Indian Premier League (IPL) 2022. Chasing the target, the two-time champions were struggling at 51/4 but Russell smashed the hopes of Punjab Kings, scoring 70 runs in 31 balls with the help of 2 fours and 8 sixes in 14.3 overs. Achieved the target of 138 runs.

KKR co-owner and Bollywood megastar Shah Rukh Khan was quite impressed with Russell’s stellar performance and heaped heavy praise on the all-rounder. Taking to Twitter after the game, Shah Rukh praised Russell’s big hitting, saying that he has been watching the ball fly so high. Shahrukh said that you are welcome my friend Russell, since when have you not seen the ball flying so high !!! When you hit the ball it is very difficult to stop them.

Welcome back my friend @Russell12A so long since saw the ball fly so high!!! It takes a life of its own when U hit it Man! And @y_umesh wow! To @ShreyasIyer15 & team well done.Have a happy night boys.

Meanwhile, KKR have now won two of their three matches and are at the top of the team standings with four points. Apart from Russell, Umesh Yadav also shone in the game. He took four wickets and broke the backbone of Punjab’s batting line-up. The 34-year-old was also adjudged the player of the match for his brilliant spell.

Captain Shreyas Iyer was overjoyed and he said after the match that to be honest, it was great to see Russell hit. It was Russell Muscle. Umesh told me he was getting old, but I told him he was getting fit. KKR will next face Mumbai Indians on 6 April at the Maharashtra Cricket Association Stadium in Pune.

Videogames entered his life in the late '80s, at the time of the first meeting with Super Mario Bros, and even today they make it a permanent part, after almost 30 years. Pros and defects: he manages to finish Super Mario Bros in less than 5 minutes but he has never finished Final Fight with a credit ... he's still trying.
Previous who is tilak varma: tilak varma wanted to buy a house for his parents from ipl 2022 salary: tilak varma wants to buy house from ipl 2022 salary
Next Beauty, the secrets of the stars: from cryotherapy by Jennifer Aniston to bees by Gwyneth Paltrow and Julia Roberts