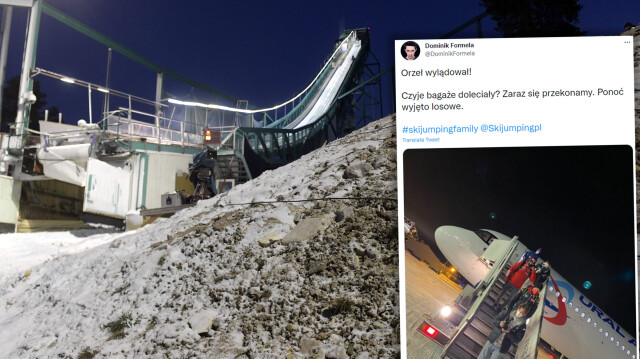 After the inauguration of the World Cup in Nizhny Tagil, the players of Michal Doleżal, like the representatives of other countries, stayed in Russia. The transfer from Ekaterinburg to Finnish Rovaniemi was scheduled for Wednesday at 1 p.m. Polish time.

Too much luggage on the plane

And indeed at this time the jumpers, training staffs and the management of the World Cup appeared on the plane, which was reported by journalists of the portal skijumping.pl on an ongoing basis. The machine, however, did not start at the appointed time.

As it turned out, there was too much luggage on the plane and each team had to leave something. In the end, the whole confusion lasted an hour and a half and the machine was delayed with such a delay A321-200NX took to the air.

The equipment crates that have been left in Russia are to arrive in Finland at a later time.

What’s next? At the beginning, all boxes with the team’s equipment are taken out …

A lot of confusion on board and an attempt to slim the plane.

The eagle has landed!

Whose luggage has arrived? We’ll find out soon. Apparently a random one.#skijumpingfamily@Skijumpingplpic.twitter.com/vSgyhZ7MLj

Poland will be represented in Ruka by seven jumpers. The line-up announced by Doleżal is full of the biggest stars. And this is how: Kamil Stoch, Dawid Kubacki, Piotr Żyła, Stefan Hula, Andrzej Stękała and Jakub Wolny will fight for points. Aleksander Zniszczol will replace Klemens Murańko who has been infected with the coronavirus and remained in Yekaterinburg.

David Martin is the lead editor for Spark Chronicles. David has been working as a freelance journalist.
Previous S7 Repair – Skomielna Biała. GDDKiA imposed a penalty on Astaldi
Next Polish-Belarusian border. Migrant children saw snow for the first time