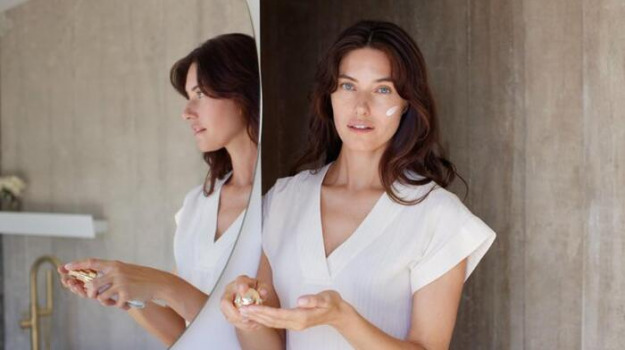 The skin reacts to stimuli like the brain, so much so that science has long associated our outer shell with capabilities similar to those of the other organs of the body. The so-called ‘cutaneous intelligence’ is increasingly cited by dermatologists and scientists from all over the world: the brain-skin exists and from studies on ion channels that regulate the inputs for the transport of electrical signals from cells, which earned the Nobel chemistry in 2003 to Roderick MacKinnon, we are now studying cellular intelligence applied to cosmetological science. The fallout of these discoveries in the beauty field has thus produced a new generation of creams and serums which, acting on the principles of ‘skin intelligence’ (as the new line of research is christened) restore radiance and firmness to the aging face. There is no shortage of clinical studies to endorse these claims associated with the new luxury serums and creams already loved worldwide and made known by celebrities including Dakota Fanning, Diana Silvers and Ella Balinska.
“Skin Intelligence is the fundamental ability that each person’s skin has to distinguish between good and bad stimuli, to maintain an optimal condition at the epidermis level, – explain the formulators of the Clé de Peau Beautè brand who created the new serums . – After years of studying the behavior of epidermal cells, we have the certainty that the skin is able to detect, process and react to inputs instinctively, just like the brain”.
Scholars have observed the reactions of the ‘skin cell brain’ to UV rays, dehydration, oxidation, pollution, fatigue, anxiety and physical discomfort. While ‘High Intelligence’ cells react with high levels of repair, smooth and even skin texture, even tone and regular contours, ‘Low Intelligence’ cells have depleted cellular energy and exhibit a rough, uneven and dry skin texture, with visible signs of aging, wrinkles, sagging and dull skin tone. After decades of research, scholars have identified some functional principles, such as the patented compound ‘Skin Empowering Illuminator’, capable of enhancing the skin’s ability to defend itself and self-repair, returning more radiant, firm and smooth. Recently arrived in Italy, the new ‘skin intelligence’ dermatological remedies contain up to 60 active ingredients together. The formulas are based on organic plant extracts of Asian origin, used in high concentrations and grown only for the brand. These include the Akoya pearl extracts grown in Uwajima (in the Ehime prefecture, Japan) with a high content of moisturizing amino acids and the silk extracts obtained from the cocoon of organic mulberry leaf silkworms grown specifically for the brand on a farm in the north of Thailand. In addition, red Perilla leaves with a high level of protection from the sun’s rays, hand-picked at the peak of their aroma in the cultivations of the Chinese province of Guangdong. Or the Kelpex (patented complex derived from algae), used to improve the conditions of the stem cells of the epidermis and give new radiance to the skin.

David Martin is the lead editor for Spark Chronicles. David has been working as a freelance journalist.
Previous Ana De Armas will play Marilyn Monroe in the new biopic, Blonde
Next Qatar 2022, Osho speaks: “World Cup without beer is like satire without Di Maio”