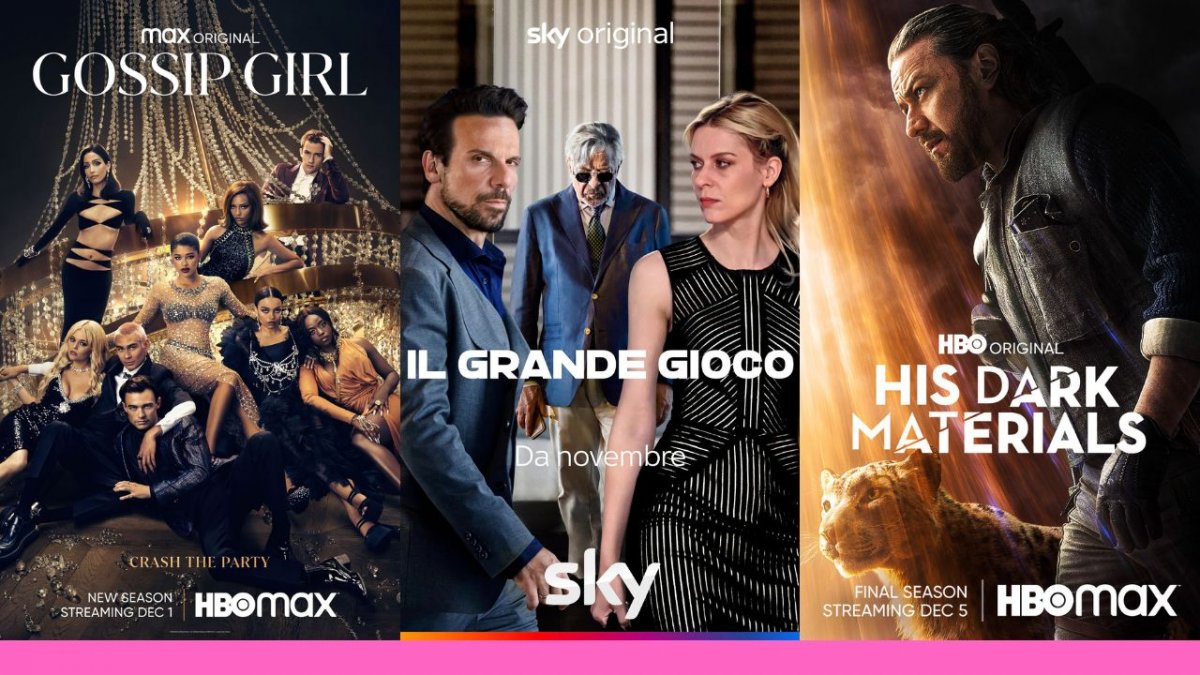 Sky, December 2022: the novelties in the catalog between films and TV series

Sky has just announced a preview of some of the news related to the titles coming in catalog of Sky Serie, Sky Cinema and Sky Atlantic in the month of December 2022: from A spy among us – A loyal friend loyal to the enemy, to the last season of His Dark Materials, up to the Harry Potter films.

A SPY AMONG US – A LOYAL FRIEND LOYAL TO THE ENEMY

From Friday 16 December on Sky Atlantic and streaming on NOW, also available on demand: based on the New York Times bestseller written by author, historian and journalist Ben Macintyre, the six-episode miniseries A spy among us – A loyal and faithful friend To the Enemy is a gripping spy story set during the height of the Cold War that dramatizes the true story of Nicholas Elliott (Damian Lewis) and Kim Philby (Guy Pearce), two British spies and longtime friends.

Philby is perhaps the most famous defector and undercover agent for the Soviets in history. The one told in the miniseries is a story of delicate duplicity, of loyalty, of trust and obviously of betrayal. Kim’s personal one towards Nicholas and the one with decidedly greater implications, the one towards the country. A betrayal that took place at the height of the Cold War and which seriously damaged not only a friendship but also, above all, British and American intelligence.

From Wednesday 21 December exclusively on Sky Atlantic and streaming on NOW, also available on demand: based on “The amber telescope“, the final novel in Philip Pullman’s award-winning trilogy, the final chapter of this HBO and BBC epic fantasy series will feature Lyra (Dafne Keen), the child of prophecy, and Will (Amir Wilson), the bearer of the “thin bladeof the second chapter, travel to a dark place from which no one has ever returned. As Lyra’s father’s great war against the Authority approaches, they will learn that saving worlds comes at a terrible price.

GIULIA VALENTINA IN THE COUNTRY OF SERIES

From 1 December, every first of the month at 21.00 on Sky Serie and streaming on NOW: very passionate about TV series, Giulia Valentina, content creator with about 1M followers on Instagram, hosts a monthly column on the best series aired on the channels to Sky brands dedicated to TV series (Atlantic, Serie and Investigation), of which it thus becomes the face. From an exclusive, welcoming studio with a refined taste, she hosts all fans like her in the living room of the Sky series, narrating them in preview through exclusive materials, recaps, curiosities.

In each episode, Giulia Valentina will take viewers into the world of Sky Atlantic, Sky Serie and Sky Investigation through a careful selection of titles that will represent the highlights of the following month, providing viewing advice and proposing various sections.

From 2 December exclusively on Sky Serie and in streaming only on NOW, also available on demand: with one episode a week given at the same time as its debut on HBO Max, the iconic teen drama is back on the scandalous lives of Manhattan’s elite developed by showrunner Joshua Safran, former writer and executive producer of the original series of the same name.

The new episodes are also based on the bestselling novels by Cecily von Ziegesar and the original show developed by Josh Schwartz and Stephanie Savage. The first season debuted in 2021 and is fully available on demand on Sky and streaming on NOW.

From Saturday 3 December on Sky Serie and streaming on NOW, also available on demand: the series, based on the novels by James Herriot and launched on the occasion of the 50th anniversary of the publication of the first volume, tells the story of three veterinarians who, starting in 1937, they work in the Yorkshire Dales. Siegfried Farnon employs James Herriot in his veterinary practice at Skeldale House. In addition to Siegfried and James, there is Siegfried’s younger brother Tristan and Mrs. Hall, their housekeeper.

The holiday spirit is breathed in classic Christmas stories such as: the film based on Frances H. Burnett’s novel Little Lord with Rick Schroder and Alec Guinness; the fantastic film cult Gremlins, directed by Joe Dante and produced by Steven Spielberg. The Christmas atmosphere is not lacking in films that are now indispensable during the holidays, starting with the romantic Serendipity – When love is magic with Kate Beckinsale and John Cusack. And again: Dickens – The man who invented Christmas with Dan Stevens in the role of the English writer who gave birth to the classic of literature “Christmas Carol“; the heartwarming true story of a dog and his owner, played by Richard Gere, Hachiko – Your best friend.

Together with Fantastic Beasts: Dumbledore’s secrets, the most loved wizard of the big screen returns to the channel with the franchise with one of the highest grossings in the history of cinema (over 8 billion dollars worldwide) with the 8 films of the saga film of Harry Potter, born from the pen of the English writer JK Rowling and interpreted on the big screen by Daniel Radcliffe, together with Emma Watson in the role of Hermione Granger, Rupert Grint in those of Ron Weasley, Alan Rickman in those of the ambiguous Severus Snape and Robbie Coltrane, recently deceased, in those of the lovable Hagrid.

It was 2001 when the first chapter of the saga, Harry Potter and the Philosopher’s Stone directed by Chris Columbus, was released in theaters, which achieved record box office receipts and which narrates the difficult childhood of little Harry in the world of “muggles” and his arrival at the Hogwarts School of Witchcraft and Wizardry. The following year Harry Potter and the Chamber of Secrets was released, still directed by Columbus, in which Harry, having returned to the school of magic after the holidays, faces a diabolical presence that petrifies his victims and must discover the terrible secret of a mysterious room.

In 2004 Alfonso Cuarón signed the direction of Harry Potter and the Prisoner of Azkaban giving the setting a darker atmosphere and a more adult imprint on the narrative. Here Harry has to face the dangerous criminal Sirius Black (Gary Oldman), who has just escaped from Azkaban prison.

The direction was entrusted to Mike Newell for the fourth chapter of the saga, Harry Potter and the goblet of fire, in which Harry is preparing the return of the dark Voldemort (Ralph Fiennes) between magic tournaments, dances and love turmoil. Harry Potter and the Order of the Phoenix marked the directorial entrance of David Yates, who also directed the subsequent films. In this fifth chapter, before a prophecy decides his fate, Harry discovers the existence of a secret association that wants to kill Voldemort, whose return looms over Hogwarts.

It was 2009 when Harry Potter and the Half-Blood Prince came out at the cinema. In this sixth adventure, Harry finds a mysterious manual that belonged to the Half-Blood Prince through which he learns the secrets of black magic, but to defeat Voldemort he will need a memory kept by Professor Slughorn (Jim Broadbent). In 2010 and 2011 the final chapters, Harry Potter and the Deathly Hallows – Part 1 and Harry Potter and the Deathly Hallows – Part 2, followed one another in theaters, in which the challenge with Voldemort is upon us and, to defeat him, Harry, Hermione and Ron must find and destroy the horcruxes, objects containing the soul of the Dark Lord.

David Martin is the lead editor for Spark Chronicles. David has been working as a freelance journalist.
Previous Genesis Noir PC Free Game Download Full Version
Next Ever Anderson is the daughter of Milla Jovovich, model and actress