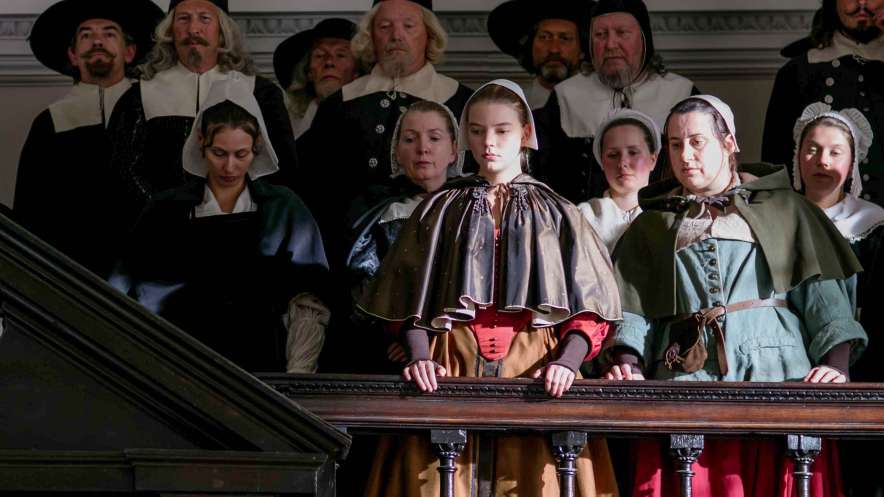 THE CRIMES OF THE GLIMMER – GUESS WHO?
Monday 9 January at 21.15 on Sky Cinema Uno and streaming on NOW, also available on demand
The beloved yellow-hued comedies of The Crimes of the BarLume, the Sky Original production co-produced with Palomar, celebrate their tenth anniversary and return exclusively to Sky Cinema for three Mondays, with three new stories freely inspired by the world of the series “The Crimes of the BarLume” by Marco Malvaldi. The direction of Roan Johnson is confirmed, this year flanked by Milena Cocozza, as well as the historical characters played by: Filippo Timi, Lucia Mascino, the “old men” Alessandro Benvenuti, Marcello Marziali, Atos Davini, Massimo Paganelli, Enrica Guidi, and with Corrado Guzzanti and Stefano Fresi. When they kill the apartment building manager that many wanted dead, it’s trouble for Fusco. Luckily there is the detective Viviani and Rimediotti. At 21.45 also on Sky Cinema Comedy

COMMISSIONER GAMACHE – MYSTERIES AT THREE PINES
From Sunday 8 January on Sky Investigation and streaming on NOW, also available on demand
From the mysteries of the writer Louise Penny, Alfred Molina in a detective story set in Quebec, Canada. Commissioner Armand Gamache sees things others don’t: the light between the cracks, the mythical in the mundane and the evil in what seems merely ordinary. A quality that certainly comes in handy for him as regards his profession, but which also entails an unpleasant “side effect”: doubting, always and in any case, others. Because everyone has a secret. While investigating a string of murders in the seemingly idyllic town of Three Pines, Gamache uncovers some long-buried secrets and faces some all-too-personal ghosts.

THE MINIATURIST
From Wednesday 11 January on Sky Serie and streaming on NOW, also available on demand
Based on Jessie Burton’s bestseller, The Miniaturist tells a story set in 17th-century Amsterdam. Petronella Brand, Anya Taylor-Joy (The Chess Queen), a young woman who has just moved to Amsterdam, hires a mysterious local miniaturist to decorate her dollhouse received as a gift from her husband. But the miniatures, very lifelike, somehow strangely begin to foreshadow their fate.

PREDATORS
From Friday 13 January at 21.15 on Sky Nature and streaming on NOW, also available on demand
In this gripping new series, we discover how our fast-changing world is affecting predators and the kingdoms they rule. Those who once dominated are now being questioned. Territories are redrawn and new alliances are created. In this ever-changing landscape, every predator must overcome new challenges and seize new opportunities. For polar bears in Canada, wild dogs in Zimbabwe, pumas in Chile, lions in Botswana, brown bears in Russia and cheetahs in Tanzania, this is the ultimate power struggle. The stakes have never been higher: who will win? And who will lose?

ACROSS THE ICE – THE CONQUEST OF GREENLAND
Sunday 8 January at 21.15 on Sky Nature and streaming on NOW, also available on demand
Sebastian Copeland, polar explorer of international renown, and his expedition partner Eric McNair Landray, set a Guinness World Record, covering the 2300 kilometers of the south-north axis of Greenland on skis, braving storms, tiredness and complete isolation. This is the story of that journey, which shows viewers how much man is willing to go to the extreme to conquer this wild, beautiful and untamed territory.

SKY CINEMA COLLECTION – ANGELINA JOLIE MANIA
From Monday 9 January on Sky Cinema Collection and streaming on NOW, also available on demand
From Monday 9 to Friday 13 January, the Oscar®-winning actress and director Angelina Jolie is the absolute star of the channel with a programming made up of 13 films from her varied career. Her skills as an action heroine can be admired in LARA CROFT: TOMB RAIDER and LARA CROFT TOMB RAIDER – THE CRADLE OF LIFE, the two films in which she plays the famous video game adventuress, the spy-action with Liev Schreiber and Chiwetel Ejiofor SALT, and in the action inspired by the homonymous graphic novel WANTED – CHOOSE YOUR DESTINY with James McAvoy, Morgan Freeman. We can also find her in thrillers such as THE BONES COLLECTOR, where she, together with Denzel Washington, begins a hunt for a serial killer, and in her with Johnny Depp THE TOURIST, which earned Jolie a Golden Globe nomination. Among the films that have earned her other awards, the biopics GIA – A WOMAN BEYOND EVERY LIMIT are scheduled, which earned her the Golden Globe in 1999, and CHANGELING directed by Clint Eastwood, for which the actress obtained a nomination for the Oscar® and Golden Globe. We can then admire her directorial skills in the biographical war movie UNBROKEN, scripted by the Coen brothers, and in the murky marital drama BY THE SEA where she also stars in her along with ex-husband Brad Pitt.

THE HOLLOW POINT – POINT OF NO RETURN
Tuesday 10 January at 21.15 on Sky Cinema Uno and streaming on NOW, also available on demand
Patrick Wilson is crime-fighting in a thriller starring Ian McShane and John Leguizamo. Sheriff Wallace returns to his Arizona hometown, finding a community torn apart by crime and gun trafficking on the Mexican border. With dangerous boss Atticus’ cartel wanting him dead, he must prove he’s up to his job and protect the city. Willing to do anything to put an end to the power of the drug lords, the sheriff will find an ally in the retired lawman he replaced.

THE SECRET LIFE OF OTTERS
From Tuesday 10 January on Sky Nature and streaming on NOW, also available on demand
This gripping docuseries follows the lives of three otter families who struggle to live and thrive in Marina Bay, Singapore. Locally extinct in the 1970s, this resilient species has returned to the city and now 120 specimens want to establish themselves in the best territory on the island, Marina Bay. But there is enough space in the bay for one family to have access to the best food, the best shelter and the safest areas to raise their pups. The three main families are the ”ruling” Bay City family, who live in Marina Bay, the River Rebels, the newcomers who have set their sights on the bay, and finally the Wildlings, a young family who live in Mangrove Forest. Let’s follow them as they navigate city life with fun exuberance and learn a fundamental rule: more territory means more challenges and more dangers.

EXTREME SURVIVAL – AMAZON
From Wednesday 11 January on Sky Nature and streaming on NOW, also available on demand
Spanning nine states in South America, the Amazon is the largest rainforest on the planet. Home to over two and a half million species, each has uniquely adapted to survive in the lush, tropical jungle landscape. Unstable weather, hungry predators and danger lurking behind every tree, in Extreme Survival – Amazonia we discover what it’s like to grow up, hunt and find love when the odds are against you.

MILLIONAIRE HOUSES LAS12
From Thursday 12 December at 4.15 pm on Sky Uno and streaming on NOW, also available on demand
As the real estate market continues to deteriorate, Los Angeles agents must become more innovative than ever to stay on top and sell the most luxurious homes in the area. Fredrik decides to expand his empire; Ryan expands into the Soho province and new agents enter the scene to take over the highly prized areas of the Hamptons, Miami and Chicago.

BURNIGN MAN – THE FESTIVAL IN THE DESERT
Thursday 12 January at 21.15 on Sky Arte and streaming on NOW, also available on demand
An inspired vision of the spectacular art at the heart of this annual celebration, Burning Man follows the unpredictable journey of artists who defy reason to bring their massive installations and sculptures to the terrible Nevada desert. Filmed shortly after the legendary founder of Burning Man dies suddenly, this documentary follows the artist community as it is tested by impossible timelines and blinding dust blizzards. This character-rich, cinematic narrative unfolds over months as the ‘burning men’ imagine, build and finally burn down the extraordinary structures of this temporary dream city. A touching and uplifting film!

BECOMING WARREN BUFFETT
Friday 13 January at 21.15 on Sky Documentaries and streaming on NOW, also available on demand
Deep love for numbers, ambition and determination accompany Warren Buffett from an early age, when he traveled door to door to sell newspapers or soft drinks and took his first steps in the world of finance. Now, he’s one of the brightest investors in history and one of the richest people in the world, but he chose to live in Nebraska, his homeland, leading a simple life. This documentary, through unpublished interviews with friends, family, colleagues and Buffett himself, delves into the story of one of the most influential men in the world in a moving and engaging portrait

SKY CINEMA COLLECTION – JACK RYAN
From Saturday 14 January on Sky Cinema Collection and streaming on NOW, also available on demand
From Saturday 14 to Friday 20 January, the adventures of ex marine and CIA analyst Jack Ryan, the character born from Tom Clancy’s pen in 1984, arrive on Sky Cinema Collection. There are 4 great stars who gave Ryan their face in the 5 film versions based on Clancy’s novels: Alec Baldwin in THE HUNT FOR RED OCTOBER, the fast-paced 1990 action-movie set in a submarine and also starring Sean Connery; Harrison Ford who played him in 1992 in POWER GAMES, where he has to deal with the IRA, and in 1994 in THE AREA, where he has to deal with an organization of dangerous drug traffickers Colombians; in 2002 the role passes to Ben Affleck in AT SUMMIT OF TENSION where Ryan is charged by a counterintelligence manager, played by Morgan Freeman, to neutralize a group of terrorists intent on detonating a nuclear device; finally, in 2014, it is Chris Pine who takes on the role of our hero and in JACK RYAN: INITIATION he flies to Moscow to thwart a crazy terrorist plan that would bring down the US economy, in the cast also Keira Knightley, Kevin Costner and Kenneth Branagh.

PULP extension
Saturday 14 January at 21.15 on Sky Arte and streaming on NOW, also available on demand
After a long hiatus, in 2012 the band Pulp reunited and returned to their hometown of Sheffield for one last concert – a tribute to the city that formed them. With exclusive access to their sensational live show, the band shares their thoughts on fame, love, mortality and more. The director combines these with video moments shot in Sheffield, revealing the deep affection the citizens feel for PULP, and the formative effect the city has had on the band’s music.

THE REVENGE OF THE SUPERHEROES
Saturday 14 January at 21.15 on Sky Documentaries and streaming on NOW, also available on demand
There is only one genre of film that for more than a decade has achieved the highest grossing, has the highest paid actors and generates the most media hype: that of superheroes. Initially considered a pastime for children, these characters with superhuman powers have gradually become the protagonists of increasingly successful films. This is the story of how superheroes successfully transitioned from the pages of the comics to the big screen and dominated the box office worldwide. In fact, the documentary traces the development of the characters from comics to cinema, from Tim Burton’s Batman prototype in 1989, passing through Blade X-Men, Spiderman, the Dark Knight trilogy, and the extraordinary Marvel Cinematic Universe.

David Martin is the lead editor for Spark Chronicles. David has been working as a freelance journalist.
Previous Cold brown hair: overview about it
Next Edward Norton discovers he is a direct descendant of Pocahontas | Cinema