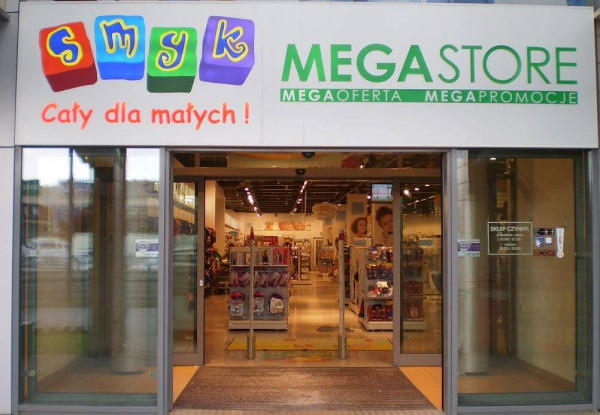 Smyk opened on Sunday 2021. It became a post office

The operator of the courier service in Smyk is GLS.

First, grocery stores, then construction stores, and now a chain with products for children. Smyk introduces courier services and opens selected showrooms also on Sundays. Although the Sejm tightened the act on restricting trade on Sundays, the new regulations will not enter into force until February next year. As you can see, networks use the vulnerability to the end. And ahead of us are two – legal – trading Sundays in December.

– Following the market needs and the growing expectations of consumers, Smyk has decided to expand its business to include courier services. For the convenience of customers, the showrooms where courier services will be handled will be open seven days a week, also on Sundays, the network informed Kid.
This Sunday, 60 stores of this chain will be open all over the country. In the Tri-City there will be a salon in Matarni Park Handlowy (ul. Złota Karczma 26

). However, the network announces that this is not the end, because in “the near future the company will analyze the possibility of introducing a courier service in new locations”. The operator of the courier service is GLSand a technology partner Pointpack.

Shopping centers that have disappeared from the Tri-City

– Smyk has long offered its customers the possibility of collecting parcels ordered in the smyk.com online store, and the current extension of this service also with external shipments is another logical step towards providing customers with the most comprehensive offer possible. Changing shopping habits are clearly moving towards looking for the most convenient solutions and facilitating the organization of everyday life. The possibility of sending and collecting a parcel while shopping in a favorite store is the convenience and time-saving that consumers expect. It is also a step towards reducing the carbon footprint by optimizing transport – delivering many parcels to one place is more ecological than delivering one parcel to many places – explains Smyka’s press office.
This is all officially and unofficially known that it is mainly about the possibility of working on non-trading Sundays. Let us recall that the status of a post office gave the opportunity to work on all Sundays for larger stores that require service by several employees (both chain and franchise). It was also an exit for small shops. Thanks to this, the owners did not have to stand behind the counter, which was allowed by the law (most chain stores operate on a franchise basis).

Patent for the so-called The “post office” was the first to be introduced by a chain of stores in 2018 Frog. With time, more and more postal points of contact began to emerge and other networks, such as ABC, Leviathan, Polomarket, Intermarche, Kaufland, Ladybird, Carrefour, Lidl and Auchan. Several stores of the construction and decoration chain have joined this group Bricomarche, from the end of October Castoramaand from November Leroy Merlin.

Trading on Sundays for “post office status” is possible until February next year. After that, an amendment will come into force that will make such activities more difficult. When the new regulations come into force, only shops that account for at least 40 percent of the postage will be able to open. monthly income from retail sales. The vast majority of stores will not meet this condition.

However, as you can see, it is still profitable for networks to use the patent for a “post office”, although there are two commercial Sundays ahead of us. On the occasion of public holidays, the act on restricting trade on Sundays includes two trading Sundays in December (12 and 19 December). Then we have a trading Sunday on January 30, 2022. Being a post office, however, will allow chains to trade for six more Sundays additionally.

The variety offered by video games never ceases to amaze him. He loves OutRun's drifting as well as the contemplative walks of Dear Esther. Immersing himself in other worlds is an incomparable feeling for him: he understood it by playing for the first time in Shenmue.
Previous NASA and SpaceX launched a probe that will collide with the asteroid
Next Karim Benzema is guilty of Valbuena’s blackmail! The Real Madrid star knows the verdict