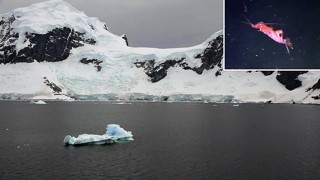 A new and long food chain. Thus, the krill fishery in Antarctica driven by aquaculture can be a threat to the ecosystem

A mountain of krill flour, divided into bags about one meter high each, in piles and piles that almost touch the ceiling of an immense warehouse. We are near the port of Montevideoin Uruguay, inside the main logistics center of Aker Biomarine, a Norwegian company that manages 65 percent of the global production of krill Antarctic.

Loads of flour made with Antarctic krill (Superb euphausia), a kind of shrimp a few centimeters long, they reach this warehouse after being worked on board ships that they fish with trawl nets in the deep ocean around Antarctica. From this same warehouse, shipments leave every day that reach all over the world.

“We have three fishing vessels operating in Antarctica ”, says Gian Franco Guerrieri, sales manager of Aker Biomarine for South America. “And a shipping ship, the Antarctic Provider. You reach the port of Montevideo about every 45-60 days ».
Almost all sacks of krill flour in Aker Biomarine’s warehouse are destined foraquaculture feed industry, while a small part is used to produce pet food. Another small part of the production does not go through here, but goes directly to a center in Houston where the company makes supplement pills Omega 3 for human consumption.

“80 percent of what we fish and produce on board is destined to aquaculture and al pet food, but most of it is for aquaculture, ”says Ragnhild Dragøy, aquaculture expert for Aker Biomarine. “We sell all over the world and we sell everything we produce. We have markets in Norway, Chile, Asia, Australia, the United States ». Antarctic krill is considered to be the basis of the food system in the Southern Ocean: this organism feeds on phytoplankton and transfers the matter organic to species of predators such as whales, seals, fish, sea birds.

In the 1970s, the Soviet Union first started an industrial krill fishery. After a decline in the 1980s, the demand for krill has been over the past two decades increased strongly, pushing the growth of production, which went from 104 thousand tons in 2001 to 451 thousand tons in 2020. A surge which shows no sign of slowing down and which is arousing widespread concern for the health of one of the most fragile ecosystems on the planet.

The surge in aquaculture

In recent years the industry of feed for fish farms, he has significantly increased his interest in Antarctic krill, in search of new ones protein ingredients to replace fish flour and oil, which are increasingly rare and increasingly expensive.

“How can we reduce ours dependence fish resources and at the same time increase the number of farmed fish? “asks Anders Østergaard, expert on sustainability for BioMar, a Danish company among the main producers of fish feed, which uses Aker Biomarine krill in some products.

“There will be more and more raw materials alternatives for aquaculture feed because we can no longer rely on few raw materials. In particular the fish resources are scarcelimited, ”says Østergaard.
Aquaculture is the fastest growing food industry ever. According to the FAO, the production from aquaculture is quadrupled between 1990 and 2020, to reach 87.5 million tons, and will reach 106 million tons by 2030.

The European Union finances the growth of aquaculture through the European Maritime and Fisheries Fund (EMFF), towards which it has allocated 1.1 billion euros between 2014 and 2020. In Italy in this period 140 million euros were committed to aquaculture development projects. In 2019 Italy was the fourth producer of aquaculture in Europe (154 thousand tons per year – Eumofa data) and was the second producer of trout (34 thousand tons), with growing numbers also for sea bass and sea bream farms.

Although Europe invests in aquaculture also with a view to Green Deal, in fact the exponential growth of this industry is contributing to the over-exploitation of the fish resources used to produce flour And fish oil, necessary for feed for carnivorous species that are raised, such as salmon, trout, sea bass and sea bream. According to the FAO, in 2020 as many as 16 million tons of fish, 20 percent of the global catch, was used to produce fishmeal and oil.

«The search for new ingredients for the formulation of feed is a priority for aquacultureespecially Italian, given that there are fewer and fewer raw materials such as fish meal, ”says Marco Martinoli, researcher at the Council for Research in Agriculture and Analysis of the Agricultural Economy (Crea).

According to Robert Tillner, manager of Aller Aqua, another Danish feed company fish«As feed producers we are looking for alternatives to different ones ingredients, including fishmeal and fish oil ‘. “Krill is one of the ingredients we use,” continues Tillner. “In particular in the feed for salmonids, then feed for trout and salmon ».

A threat to the Antarctic ecosystem

In recent years, several NGOs, including Greenpeace, Pew Charitable trusts and the Antarctic and Southern Ocean Coalition, have criticized industrial krill fishing for its impact on the Antarctic ecosystem.
Krill is consumed by different animals in Antarctica, from whales, seals, fish, penguins, sea birds. Everyone over there they live thanks to krill, ”says Nicole Bransome of the NGO Pew trusts. According to Bransome, Antarctic krill also contributes significantly to the ocean’s ability to absorb CO2 from the atmosphere.

According to Javier Arata, director of the Association of Producers for Responsible Krill Fisheries (ARK), a self-regulating body of the krill industry, the krill fishery has not had any negative impact on Antarctic krill populations. Arata shows the results of the only two monitors ever carried out, in 2000 and 2019, on the krill population in Antarctica, and draws his conclusions: “To date there is consent that between 2000 and 2019 the population remained relatively similar, ‘he says.

Independent scientists studying krill and the Antarctic ecosystem do not share this, however thesis. According to Lucas Krüger, researcher at the Antártico Chileno Institute (INACH) in Punta Arenas, Chile: “There is a high fluctuation annual krill biomass, but there is also scientific evidence that this biomass is getting itself reducing in time. So even in times of plenty, there is less (biomass) than in the past, ”says Krüger.

A study published in September 2022 by the University of Concepción (UdeC-Chile) together with other Chilean institutes revealed that by 2100 the population of krill will suffer a “considerable reduction», In particular as a result of the climate crisis.
According to César Cárdenas, another researcher at INACH, “after the Arctic, the Antarctic Peninsula is one of the areas of the planet that is warming more rapidly” and the heat is reducing habitats for several species, including krill.

In 2020 Krüger and Cárdenas, along with other authors, published one study on the Effects of Antarctic Krill Fisheries on Populations of penguins: “In the northern part of the Antarctic Peninsula, populations of emperor penguins are decreasing,” says Krüger. “Also there biomass of krill in the peninsula is undergoing changeslocal reductions, different distribution, so there is less krill available ».

Krill fishing is on the rise

As krill and penguin populations decline, new investments are driving the growth of the krill fishery. Today there are 12 fishing vessels operating in Antarctica on behalf of seven companieswhich refer to five Villages: Norway, China, by far the main producers, and then Chile, South Korea and Ukraine. The Antarctic krill fishery is regulated by the Conservation of Antarctic Biological Resources (CCAMLR), an organ of the Antarctic Treaty, the Antarctic Management and Protection Agreement signed in Washington in 1959. In 1991, the CCAMLR set a limit for krill fishing to 1 per cent of the estimated biomass, or 620 thousand tons per year out of about 62 million tons. To date this limit has never been reached upalthough in recent years fishing has increased, reaching 451 thousand tons in 2020. According to Arata, the industry is using to increase this limit by improving the fisheries monitoring system: “All the numbers suggest that, in order to maintain healthy predator populations, it is difficult we will reach 10 percent, ”says Arata. “I think maybe we can double [la quota] in good years. But there will also be vintages with less fishing ».

Meanwhile the krill industry he is already working hard. Norwegian company Aker Biomarine, market leader, has inaugurated a new ship in 2019 and one in 2021, and in the latest company presentation speaks of an expected increase in production of up to 60 percent. Another Norwegian company, Rimfrost, plans to launch a new krill vessel this year.

The government Chinese has been incentivising the krill industry with subsidies since 2016. In 2022, a new Chinese fishing vessel will join the four already operating in Antarctica, while, according to a dossier published by the Antarctic and Southern Ocean Coalition in 2021, they are two more ships are under construction.

There Russia is planning to resume krill fishing. The country ceased operations in 2010, but in February 2022 the Reuters news agency reported that Russia “announced its intention to invest 45 billion rubles (720 million euros) in fishing. [del krill] and to build five trawlers’.

Both China and Russia in recent years have repeatedly placed the veto in the CCAMLR meetings for the establishment of new marine protected areas in the Southern Ocean. A proposal for a protected area west of the Antarctic Peninsula, one of the places where krill fishing is concentrated, has been blocked every year from 2017 to today.

Videogames entered his life in the late '80s, at the time of the first meeting with Super Mario Bros, and even today they make it a permanent part, after almost 30 years. Pros and defects: he manages to finish Super Mario Bros in less than 5 minutes but he has never finished Final Fight with a credit ... he's still trying.
Previous Coppa Italia, Parma-Bari 1-0: Benedyczak-goal, now there is Inter
Next Shooting begins on Jessica Hausner’s Club Zero with Mia Wasikowska and Sidse Babett Knudsen