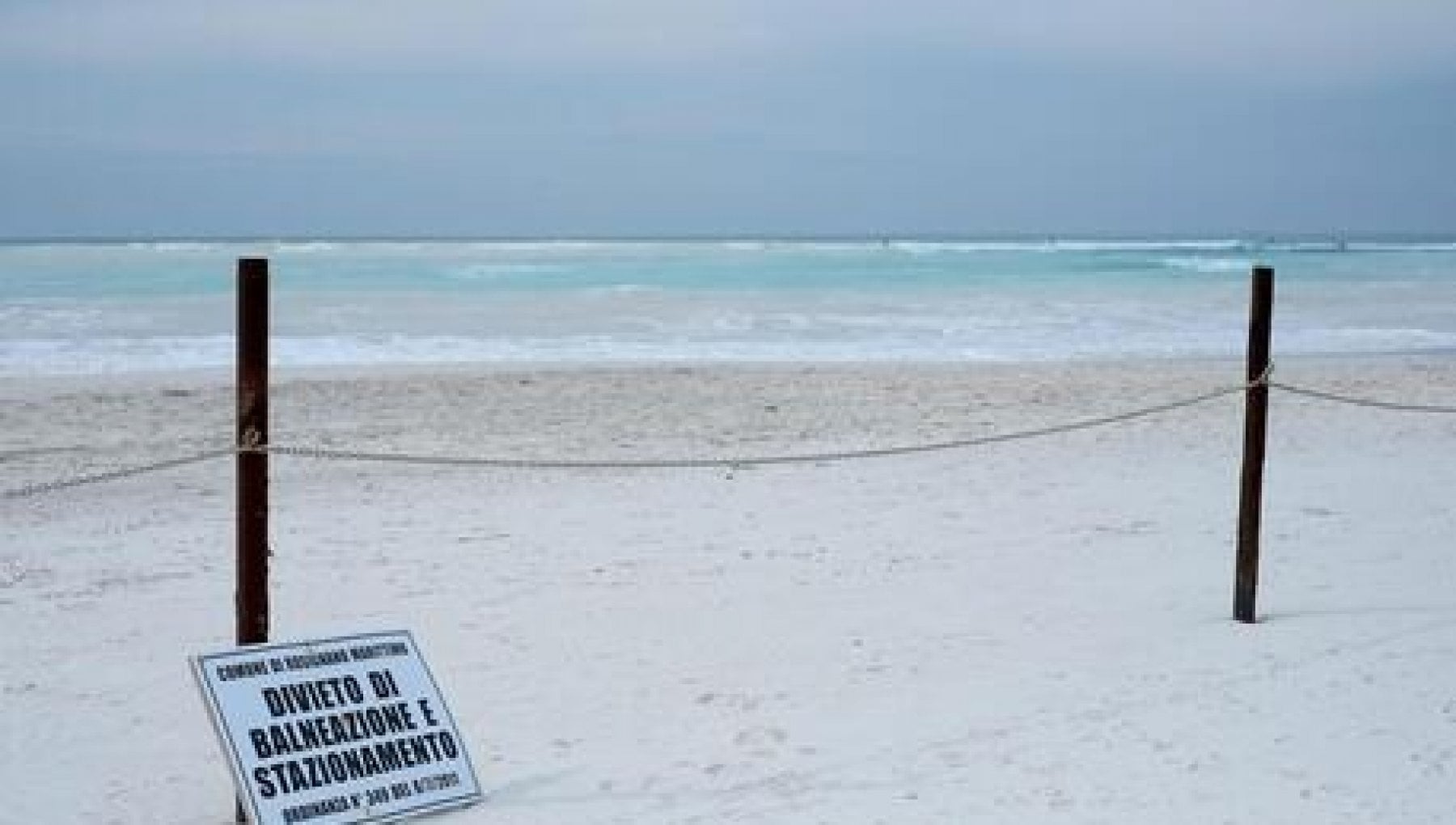 North of Livorno, pollution has been creeping into the soil and aquifers for decades, spreading through the air and contaminating the sea. The one involving the establishment of the Solvay of Rosignano marittimo, where soda ash (Solvay soda) has been produced for over a century is a long history of environmental, judicial and political battles. The soda maker on the Tuscan coast, the largest in Europe, has for decades been accused of spilling solids and heavy metals into the sea and of causing environmental and health damage. To date, almost all the sodium carbonate necessary for the Italian industry is produced in the Rosignano plant.

The symbols of this story are the colors of the sand and water, similar to those of the Caribbean. Colors that in reality are not due to nature, but to the discharges of industrial substances and sodium carbonate. The famous “white beaches” of Rosignano. Since 1999 these 14 kilometers of coastline have been included among the most polluted areas in the Mediterranean. At least according to the United Nation Enviroment Program, the United Nations program for the environment.

Even the stars do battle at Solvay

The last chapter of this long history of pollution is on 22 March when the Belgian multinational with almost 160 years of history is delivered an appeal to the TAR signed not only by WWF Italy, but also by Project Zero (the non-profit organization that fights for the protection of the seas and which counts celebrities such as Sienna Miller, Slash, Cara Delevingne and Liv Tyler); by the non-profit Medicina Democratica and by the investor-activists of the Bluebell Capital Partners fund (London financial group led by the Italians Giuseppe Bivona and Marco Taricco who started One share Esg Campaign: provision of funds for environmental battles).

A common front also with the citizens of Rosignano, led by Maurizio Marchi, an ecologist who for years has criticized the plant of the chemical giant. In the appeal they ask to cancel the decree with which the Minister of Ecological Transition Roberto Cingolani renewed the full environmental authorization of the Rosignano plant five years in advance. Besides the soda maker, there are two gas-fired power plants, a plant for the production of chlorine and caustic soda, another for polyethylene and one for hydrogen peroxide.

Another 12 years of discharges into the sea

At the center of this latest legal battle between the chemical giant in Italy for 110 years and environmental associations is theIntegrated environmental authorization (Aia) renewed for the next 12 years. A provision governing the plant and providing for measures to reduce emissions into the air, water and soil. In addition to the disposal of processing waste. It should have expired in 2027, but was renewed on 20 January and until 2034. With the renewal of The Hague, the Solvay plant was authorized to dump a maximum of 250,000 tons per year of waste and scrap for another 12 years. production through an open channel into the sea considered in order in terms of environmental protection.

Yet it was only in December 2021 that the United Nations Special Rapporteur Marcos A. Orellana, at the end of his trip to the polluted sites of Italy, had announced in his meeting with the government that “he had received information on the pollution created by Solvay in Livorno” and to want to “investigate the question”. The United Nations report on Rosignano is expected in September 2022.

The reasons for the appeal

The appeal is based on three reasons: firstly, the alleged violation by Solvay of the European and national guidelines which prohibit thelocalized accumulation of suspended solids spilled into the sea. Secondly, the alleged excess of power of the Italian authorities due to lack of investigation by the ministry which issued the authorization without having examined all the elements useful for evaluating the dangers to the environment and health.

Finally the potential conflict of interest of Cingolani for having signed a decree that would have benefited the company (Solvay) with which, as head of Research and Innovation at Leonardo – a position he held before becoming a minister and which he left – he had concluded a joint-venture for a research and development program on polymers for aeronautical applications.

Also in recent weeks, the minister’s reply had arrived: the renewal of the Hague was ordered by the Ministry of the Environment in 2018 before Cingolani took office in 2021 on the basis of new European regulations that came into force the previous year. “In practice, while the administrative procedure was being carried out to assess whether Solvay was in order, the European Commission established the new BAT (Best available techniques – the best possible techniques) – explains Domenico Aiello, the lawyer representing the WWF. and one of the petitioners – at that point the ministry had to re-evaluate all the old authorizations by effectively issuing new decrees. The authorization thus restarted with a new date, that of 2022 “. A bureaucratic question, then. So why submit the appeal?” Because both in the first Hague of 2015 and in the current one in our opinion, a series of assessments on discharges into the sea, on the dispersion of processing waste. We are talking about a very old structure, dating back to 1912, and an already very compromised environmental situation “.

The position of the multinational

The leaders of Solvay who today in Tuscany support the “Enel Green Geothermal Power Production” project by supplying sodium carbonate to 35 modern new geothermal stations, thus replied to the pollution allegations: “The soda production process in Rosignano is safe and compliant to European and Italian regulations “. And to find out which substances are currently discharged into the sea by Solvay, it is necessary to consult theEuropean Pollutant Release and Transfer Register, a register that contains information on pollutants in the air, land and water of all establishments in Europe. In its latest 2017 statement, the company said it dumped 3.88 tons of arsenic, 3.7 tons of chromium, 59 pounds of mercury and other pollutants.

Solvay also explained that the technology developed by the company allows the recycling of production waste which, transformed, integrates the need for raw materials of natural origin. “The majority of Italian waste-to-energy plants and incinerators use this technology – they explain – which provides for the purification of the fumes by capturing the acid component thanks to Solvay Sodium Bicarbonate. A considerable portion of the residues is then delivered to a treatment and recovery plant also in Solvay, near Rosignano. The treated waste is reinserted into a production cycle. A technology that is also being used in the maritime sector, for the purification of the sulfur of the fumes emitted by large ship engines. Since 2000 it has supplied both the A2A company for the disinfection of the water in the Milan treatment plant and from 2010 ACEA for the one in South Rome “.

So it all started

In July 2003, Solvay signed an agreement with the local authorities which included three points:

In 2004 the multinational received 13 million euros of public resources aimed at improving the environmental conditions of the Rosignano plant, plus i 30 million allocated in 2003 following the signature of the program agreement. Not only. In 2017 the Ministry of Economic Development and the Tuscany Region gave the green light to investments by Solvay di 52 million euros for an “environmental protection” plan, but through Invitalia they gave public grants of approximately € 9.5 million.

The investigation into the spills

In 2008, the Democratic Medicine association presented a complaint to the Livorno prosecutor’s office for non-compliance with the 2003 program agreement and the presence of four illegal discharges unknown to Arpat (Regional Environmental Protection Agency of Tuscany).

In May 2013, after four years of investigations, the judiciary found it illegal spillage of mud in the “white beaches” area through a system of unmapped discharges that allowed mercury, lead, selenium and phenols to be discharged into the sea. The leaders of the multinational negotiated the penalty for environmental crimes by paying a maxi fine of almost 7 million euros to be invested in environmental remediation and the safety of the site.

In the report of Arpat Toscana of June 2017 among the sites subject to reclamation there is also Solvay which presents “contamination of both soils and underground waters by arsenic, mercury, organochlorine compounds and Pcb (polychlorinated biphenyls)

The targets of contamination due to both processing and backfilling of processing waste are:

On June 19, 2007, an electrical blackout caused a spill of ammonia nitrogen in the waters in front of the plant. According to Arpat, they were about 11.7 tons in just 24 hours compared to the 3.67 tons that the plant would have discharged under normal operating conditions. The same agency in a final report stressed that the electrical outage which occurred, while representing an exceptional situation, had brought out various critical aspects related to the safety of the plant and related, in particular, to the emergency procedures and devices aimed at the confinement of ammonia. . Ten years after 29 August 2017, due to another electrical blackout, there was a new ammonia spill into the sea which, according to the Zooprophylaxis Institute of Pisa, resulted in an exceptional death of fish.

The fumes of Solvay

The Solvay pole, including the two methane gas power plants, again according toEuropean Pollutant and Transfer Registrer it is the second emitter of CO2 in Tuscany with 2,200,000 tons per year. The amount of mercury detected is 4 grams per 1000 kg of chlorine produced, corresponding to 480 kg of mercury per year in the atmosphere.

David Martin is the lead editor for Spark Chronicles. David has been working as a freelance journalist.
Previous Nothing happened to Harsha Bhogle, but people seem to have made fun of him!
Next Semifinal Equation Gets Tough For India After Getting Out From Top Four Know Current Scenario – Icc Women’s World Cup