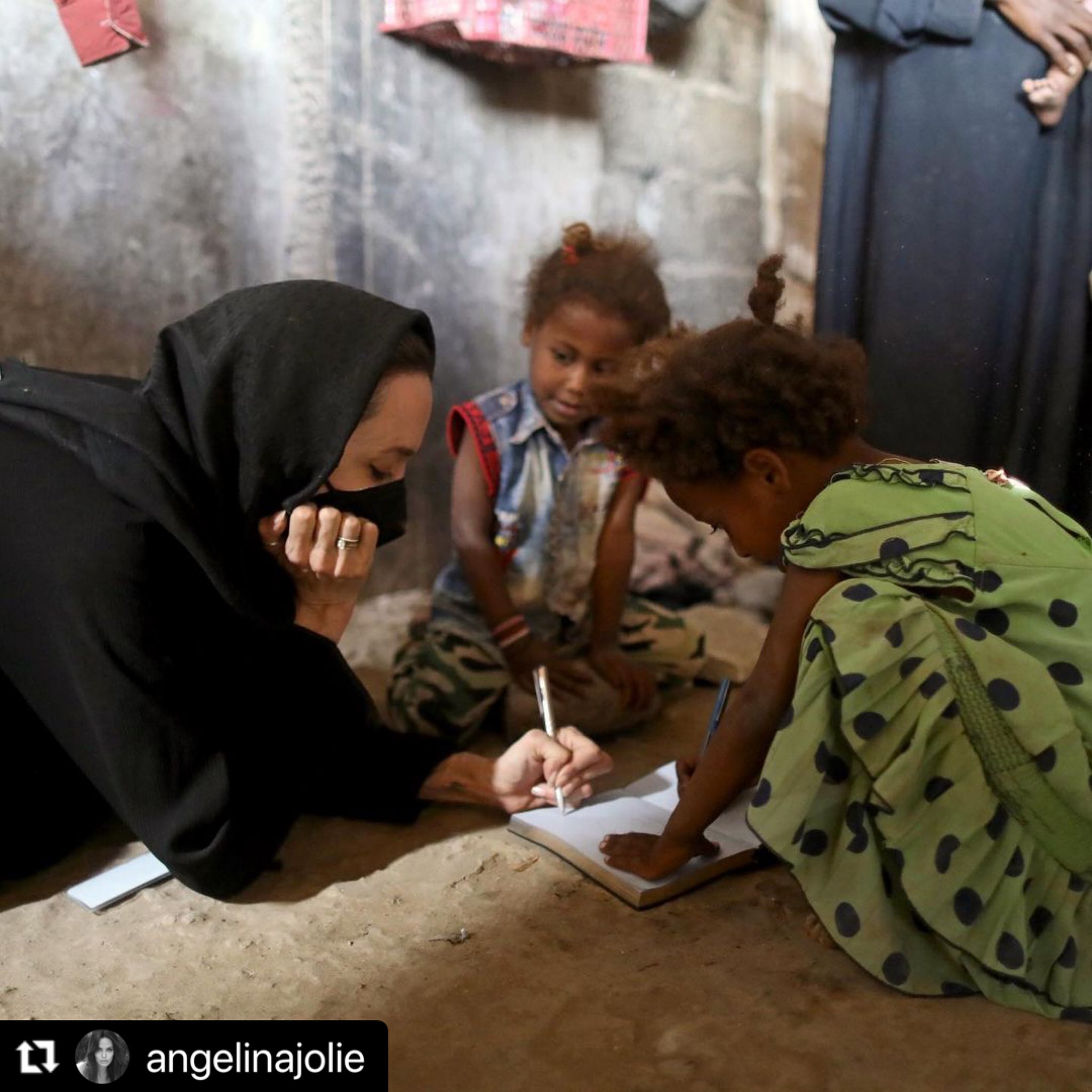 “The lack of solutions to the conflicts, combined with global insecurity, has caused an unmanageable amount of displacement and humanitarian aid needs, to the extent we see in Yemen today.”

Angelina Jolie declared this during today’s conference, a few days after her return from Yemen, where the actress, producer and UN special envoy visited displaced persons in refugee camps.

“It is heartbreaking, infuriating & a man-made crisis. Aid relief without political solutions does not work – the two go hand in hand. Nothing is more important for Yemen than to end the conflict so people can life in safety & dignity”

After more than 7 years of war, in addition to the hundreds of thousands of dead, the country and humanitarian organizations have found themselves managing 4 million displaced persons and 23 million people suffering from hunger, disease and the risks due to conflict. Precisely to make up for the international community’s response to the crisis in Yemen, which according to Secretary General Antonio Guterres was “disappointing”, the UN organized today’s conference with the aim of raising 4.3 billion dollars to be used in 2022 .

“I visited an informal settlement, which housed 130 families. Only 20 of these receive aid in the form of food, and only when funds are available,” Jolie said. “This is the reality of a drastically underfunded humanitarian aid call in the midst of a conflict that has been going on for years without any political resolution.”

With attention focused on other conflicts, funds distributed to needy citizens of Yemen have never been fewer. Without further donations, 19 million people would go hungry in the second half of this year.

“It will be a hunger crisis of epochal proportions if we don’t step forward immediately,” said World Food Program (WFP) executive director David Beasely. “We will have no choice but to take food from the hungry and give it to the starving.”

Just earlier this year, WFP was forced to reduce the quantities of rations distributed to 8 million people due to lack of funds.

To date, the United Nations has raised $14 billion, 75% of which has been provided by the United States, Saudi Arabia, the United Kingdom, the United Arab Emirates, Germany and the European Commission. The impact of these six major donors has been “a major success,” according to Emergency Relief Coordinator Martin Griffiths.

“If there is one message we want to send to the rest of the world it is: don’t stop now. We have to demonstrate that being no longer on the front pages of the newspapers does not translate into being left behind,” said Griffiths.

The request from the United Nations has encouraged further donations from world powers. The European Commission has pledged 172 million dollars, the largest amount ever donated by Brussels since the beginning of the war (in 2014) to date. US Secretary of State Antony Blinken announced a $585 million increase in aid.

“I hope we will all take a minute to put ourselves in the shoes of the citizens of Yemen,” Blinken said later. “Humanitarian aid is part of the equation. It cannot work without peace.”

In the next few hours we will know how many countries have decided to increase their donations for the humanitarian crisis in Yemen, and if the United Nations has reached the goal of 4.3 billion dollars.

“You have an opportunity as governments to address this desperate human emergency and bring about an urgent end to the conflict,” Jolie said as she finished her speech. “I hope you will catch it. I implore you to do this, on behalf of the people of Yemen, the families I have known.”

David Martin is the lead editor for Spark Chronicles. David has been working as a freelance journalist.
Previous highlights and synthesis. Duke decides with a header – OA Sport
Next Marvel’s: The Avengers PC Game Download Full Version Free