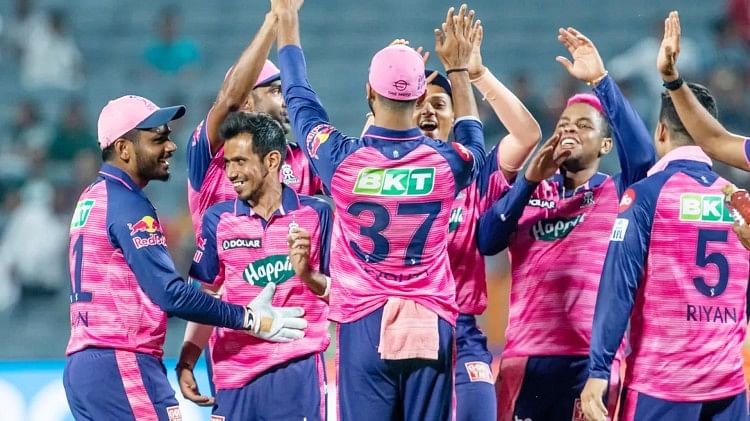 SRH vs RR Live: Rahul Tripathi could not even open the account

Sunrisers Hyderabad have had a very poor start. The team has lost two wickets for seven in four overs. Both Trent Boult and famous Krishna are swinging the ball. Krishna dismissed Williamson in his first over. After this, in his second over, he also sent Rahul Tripathi to the pavilion. Tripathi could not even open his account. Krishna got him caught by wicketkeeper Samson. After four overs, Hyderabad are seven for two. At present, Nicholas Pooran zero and Abhishek Sharma are at the crease after scoring one run. It was a wicket maiden over. SRH vs RR Live: Captain Williamson returns to the pavilion

Chasing a huge target of 211 runs, Sunrisers Hyderabad suffered a setback in the second over of the innings. Fast bowler Pranbhav Krishna got Hyderabad captain Kane Williamson caught by Devdutt Padikkal. Williamson could score two runs in seven balls. After two overs, Hyderabad made three runs for the loss of one wicket. At present, Rahul Tripathi zero and Abhishek Sharma are batting after scoring one run.

Rajasthan Royals set a huge target of 211 runs in front of Sunrisers Hyderabad. Batting first after losing the toss, Rajasthan team scored 210 runs for the loss of six wickets. Captain Sanju Samson played a brilliant innings of 55 runs in 27 balls in his 100th match for Rajasthan. This was the 16th half-century of his IPL career. Samson hit three fours and five sixes in his innings.

The Rajasthan team was lucky. In the very first over, Bhuvneshwar Kumar got Butler caught by Pooran, but the ball turned out to be a no ball and Butler got life. After this, Butler shared an opening partnership of 58 runs with Yashasvi Jaiswal. West Indies’ Romario Shepherd, playing his first IPL match, broke the partnership by dismissing Yashasvi. Yashasvi scored 20 runs in 16 balls with the help of two fours and a six. After this, Umran Malik got Jos Buttler caught by wicketkeeper Nicholas Pooran. Buttler was able to score 35 runs in 28 balls with the help of three fours and three sixes. After this, captain Sanju Samson took over the innings along with Devdutt Padikkal. Both shared a partnership of 73 runs in 41 balls for the third wicket. Padikkal missed out on a half-century. He was dismissed for 41 runs off 29 balls. It included four fours and two sixes. Samson too could not bat for long after scoring a half-century. After his dismissal, Shimron Hetmyer played a stormy innings. He played an aggressive innings of 32 runs in 13 balls with the help of two fours and three sixes. He shared a partnership of 44 runs in 19 balls with Riyan Parag. In the last over, T Natarajan sent Hetmyer and Riyan Parag to the pavilion. Parag was dismissed after scoring 12 runs in nine balls. Nathan Coulter-Nile remained unbeaten on one run. Umran Malik and T Natarajan took two wickets each for Hyderabad. At the same time, Bhuvneshwar Kumar and Romario Shepherd took one wicket each. Rajasthan scored 62 runs for the loss of three wickets in the last five overs.

Rajasthan scored 203 runs after 19 overs for the loss of four wickets. Shimron Hetmyer is playing a stormy innings. He has scored 28 runs in 11 balls so far. At the same time, Riyan Parag has scored 11 runs in seven balls. The Rajasthan batsmen scored 33 runs in the 18th and 19th overs.

Rajasthan Royals captain Sanju Samson’s stormy innings came to an end. Bhuvneshwar Kumar got him caught by Abdul Samad in the 17th over. This was Samson’s 100th match for Rajasthan. Making this match special, he scored 55 runs in 27 balls. Samson hit three fours and five sixes in his innings. This was the 16th half-century of his IPL career. After 17 overs, Rajasthan’s score is 170 runs for four wickets. Currently Riyan Parag is batting on five runs and Shimron Hetmyer three runs. 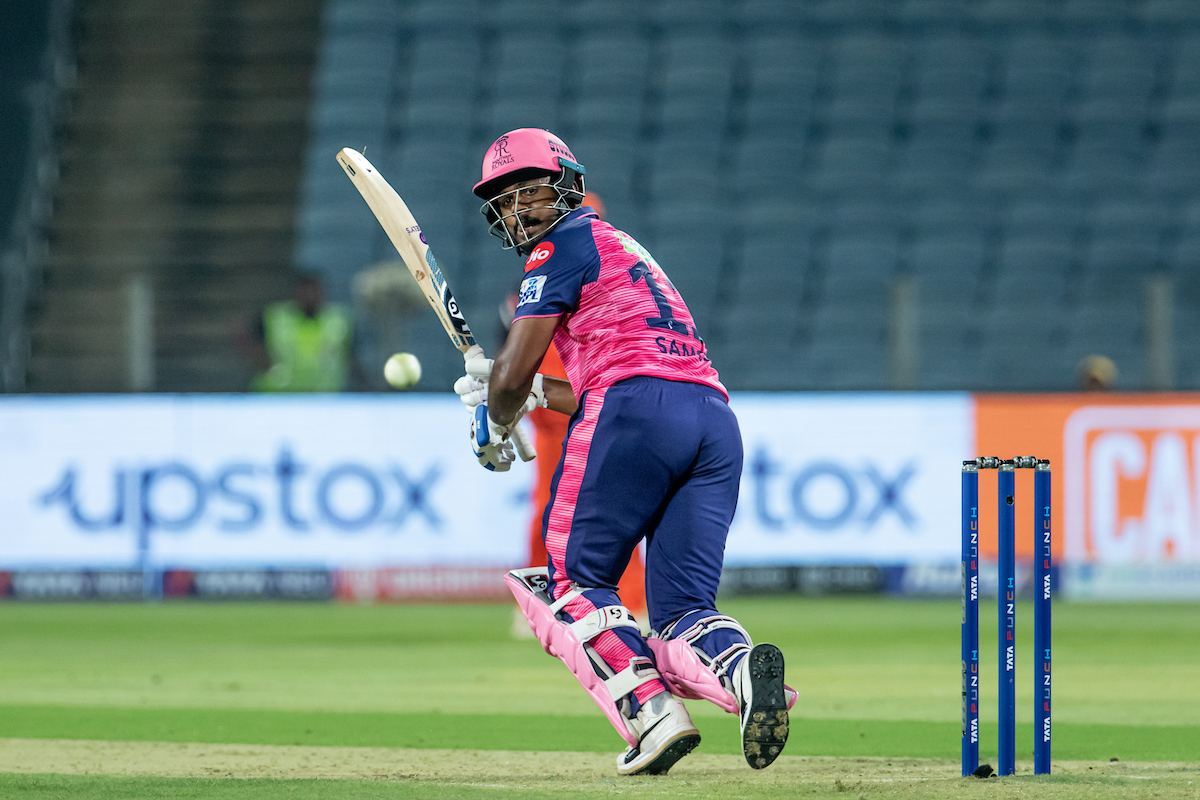 SRH vs RR Live: Padikkal returns to the pavilion in the 15th over

Devdutt Padikkal was also shocked by Umran Malik’s speed. Malik clean bowled Padikkal in the last ball of the 15th over. He could score 41 runs in 29 balls. After 15 overs, Rajasthan scored 148 for the loss of three wickets.

After 14 overs, Rajasthan scored 138 runs for the loss of two wickets. Sanju Samson and Devdutt Padikkal are playing stormy innings. There has been a 60 plus run partnership between the two so far. Samson is batting on 37 runs in 19 balls and Padikkal 36 runs in 25 balls.

After 11 overs, Rajasthan scored 101 runs for the loss of two wickets. Currently, skipper Sanju Samson is batting on 36 runs in 17 balls and Devdutt Padikkal with four runs in nine balls. This is also Samson’s 100th match for Rajasthan. Rajasthan Royals got the second blow in the ninth over. Umran Malik took revenge on Jos Buttler. In the fourth over of Rajasthan’s innings, Buttler had scored 20 runs off Umran’s ball. Now Umran got Butler caught by wicketkeeper Nicholas Pooran on the first ball of the ninth over. Butler was dismissed for 35 runs off 28 balls.

He hit three fours and three sixes in his innings. Umran’s own was denied by the field umpire. Captain Williamson then demanded DRS. The third umpire declared Butler out. After nine overs, Rajasthan’s score is 78 for two wickets. Devdutt Padikkal and Sanju Samson are currently at the crease. The Rajasthan team got its first blow at the score of 58 in the seventh over. Romario Shepherd of West Indies, who made his IPL debut with this match, got Yashasvi Jaiswal caught by Markram. Yashasvi could score 20 runs in 16 balls. It included two fours and a six.

Earlier, Yashasvi and Butler got the team off to a good start. Both added 58 runs in the first six overs in the powerplay. After seven overs, Rajasthan scored 60 runs for the loss of one wicket. Currently, Jos Buttler is present at the crease after scoring 34 runs off 26 balls and captain Sanju Samson scoring one run. SRH vs RR Live: 21 runs came off Umran’s over

In the fourth over, stormy bowler Umran Malik came to bowl. 21 runs came in his over. In this over, Umran also bowled the ball at the speed of 150. The third ball of the over was bowled by Umran at a speed of 150 kmph. At the same time, the fourth ball was thrown at a speed of 148 kmph and the fifth ball at 146 kmph. After four overs, Rajasthan’s score is 34 runs without losing a wicket. Jos Buttler is batting on 25 runs off 19 balls and Yashasvi Jaiswal scoring six runs. SRH vs RR Live: Buttler gets life, Bhuvi bowls a no ball

Jos Buttler and Yashasvi Jaiswal come out for the opening for Rajasthan. At the same time, Hyderabad handed the ball to Bhuvneshwar Kumar. Heavy drama was seen in this over. Jos Buttler was caught on the fifth ball of Bhuvneshwar. After this Butler started moving towards the dug out, but was stopped by the umpire. The third umpire called the ball a no ball because Bhuvneshwar had overstepped. In this way Butler got life. Butler was batting at zero then. After one over, Rajasthan’s score is one run without losing any wicket. Sanju Samson is playing 100th match for Rajasthan Royals. He has consistently been the consistent performer of this team. Overall, before this match, Samson has played 121 matches in the IPL. In his 117 innings, he has scored 3068 runs at an average of 29.22.

SRH vs RR Live: Both the teams are as follows

A look at the Playing XI for #SRHvRR

Videogames entered his life in the late '80s, at the time of the first meeting with Super Mario Bros, and even today they make it a permanent part, after almost 30 years. Pros and defects: he manages to finish Super Mario Bros in less than 5 minutes but he has never finished Final Fight with a credit ... he's still trying.
Previous another beloved DC Universe star joins the cast of the film with Vin Diesel
Next virat kohli on abd: virat kohli ne bataya ab de villiers ne kaise kiya tha khulasa: Virat Kohli narrates the story of AB de Villiers’ retirement 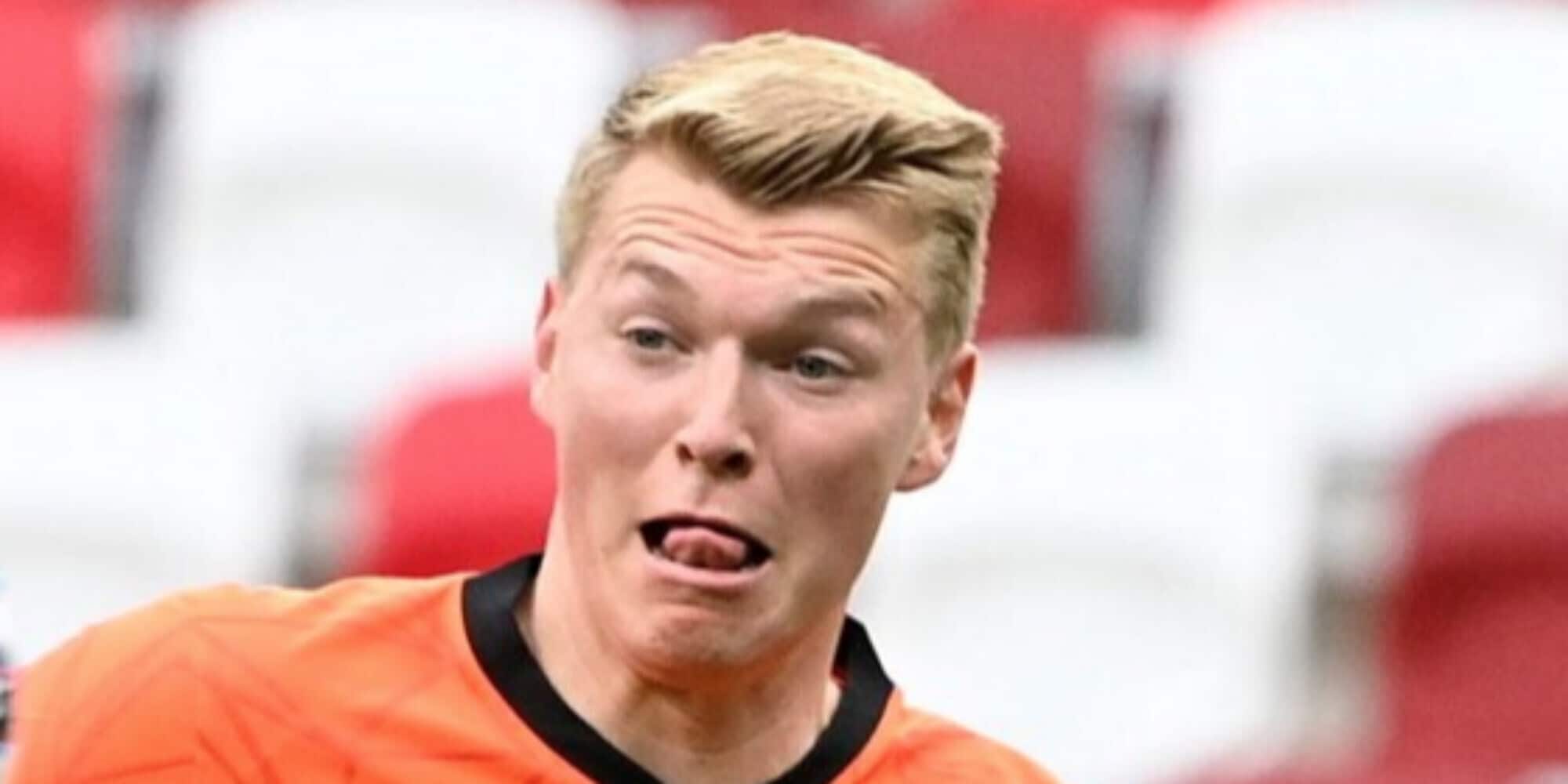 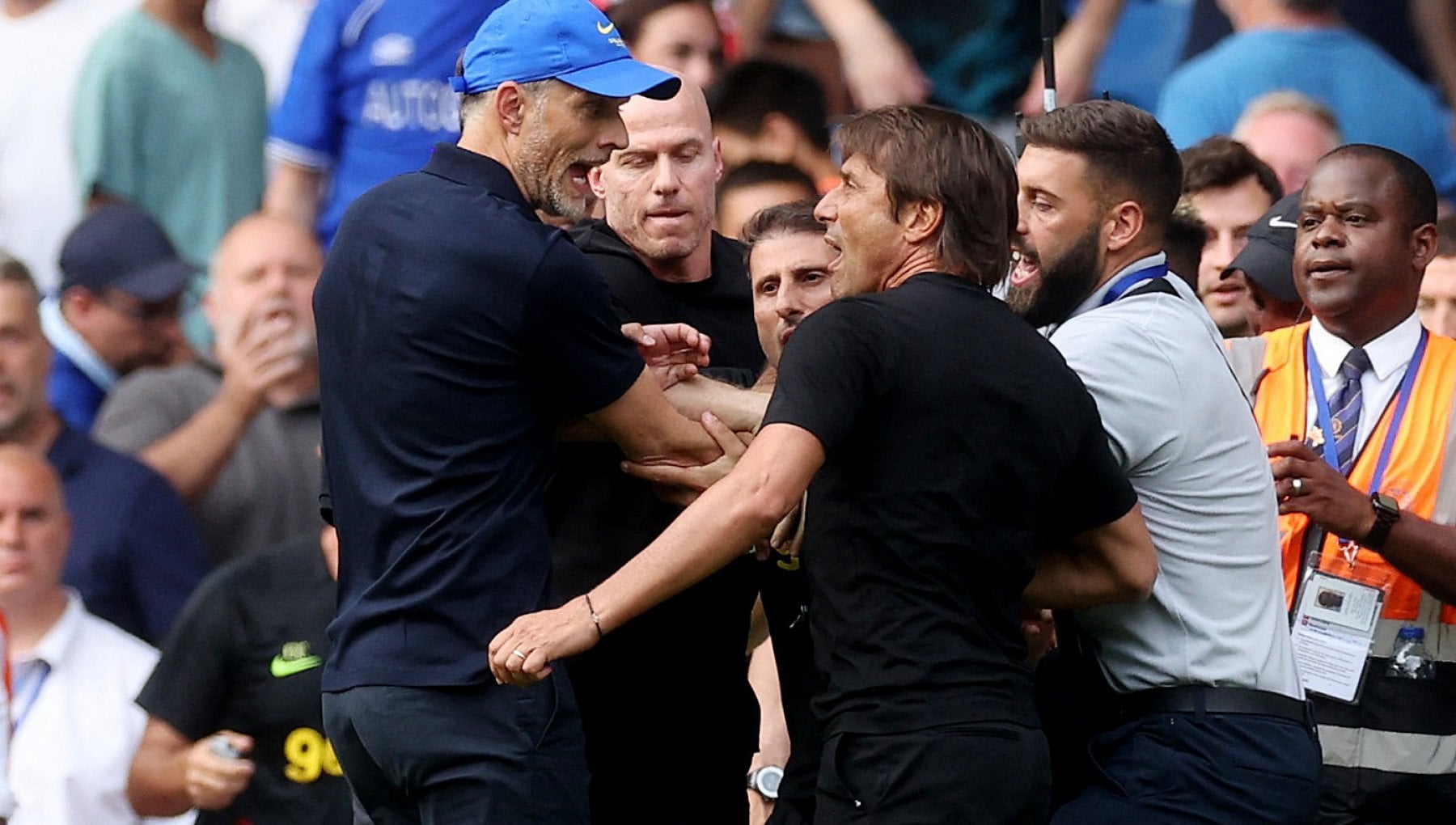 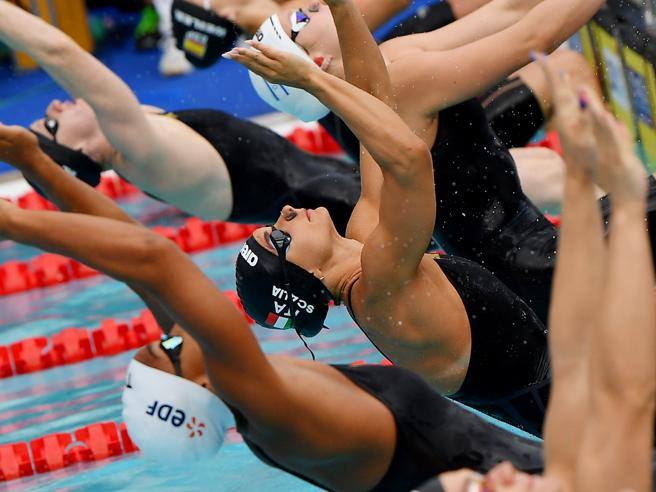 from Arianna Ravelli An exciting gold comes from the men’s style 4×100 with Miressi, Ceccon, …