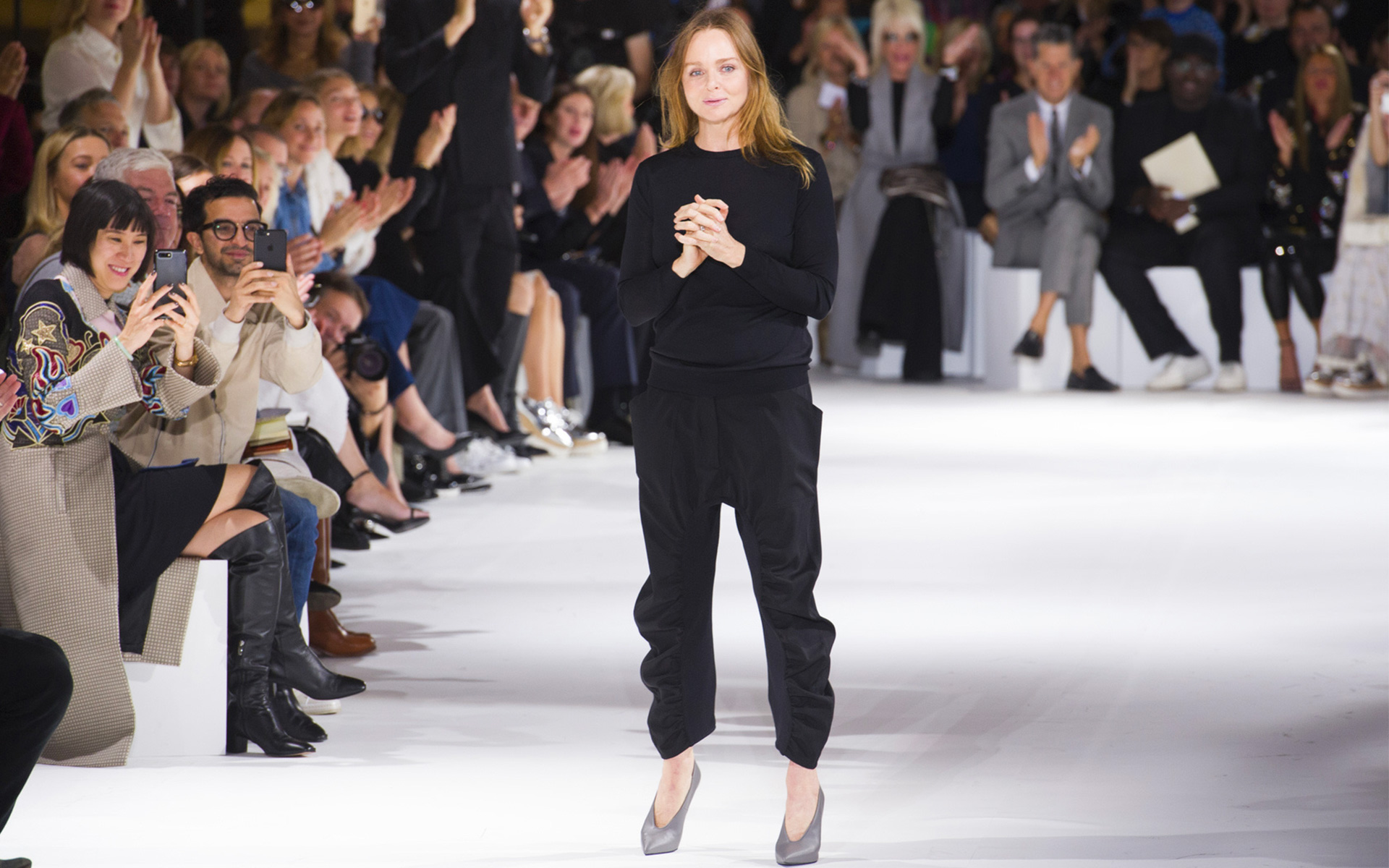 Stella McCartney: who she is, children, history and brand

Stella McCartney was born on September 13, 1971 in Camberwell, London. Daughter of ex Beatle Paul McCartney and Linda, photographer and animal rights activist. Stella has three siblings, Heather, Mary and James. Her parents choose to send Stella and her siblings to public school near their home. At 13 Stella already shows an interest in fashion. She designs her first jacket and at 16 years ago an internship with Christian Lacroix. She later goes to work at her father’s tailor, Edward Sexton in Savile Row. She enrolled at Central Saint Martins in the early 90’s. She graduated in 1995 with a fashion show attended by her model friends Kate Moss, Naomi Campbell and Yasmin Le Bon. The entire collection is bought by the London boutique Tokyo and also sold by Browns, Joseph, Bergdorf Goodman and Neiman Marcus.

In 1997 Stella was hired as creative director by the Chloé fashion house. She will stay there until 2001. When Stella arrives at Chloé, the French fashion house is famous for her feminine and romantic style. The stylist brings a sexy and fresh attitude. Must-haves become the t-shirts with the zodiac signs, very low-waisted and super-tight jeans. She herself (and her friends, Phoebe Philo, Kate Moss, Sadie Frost) plays the ideal client: young, with a full and fulfilling social life, with a desire to have fun, always and in any case. Sales are skyrocketing. 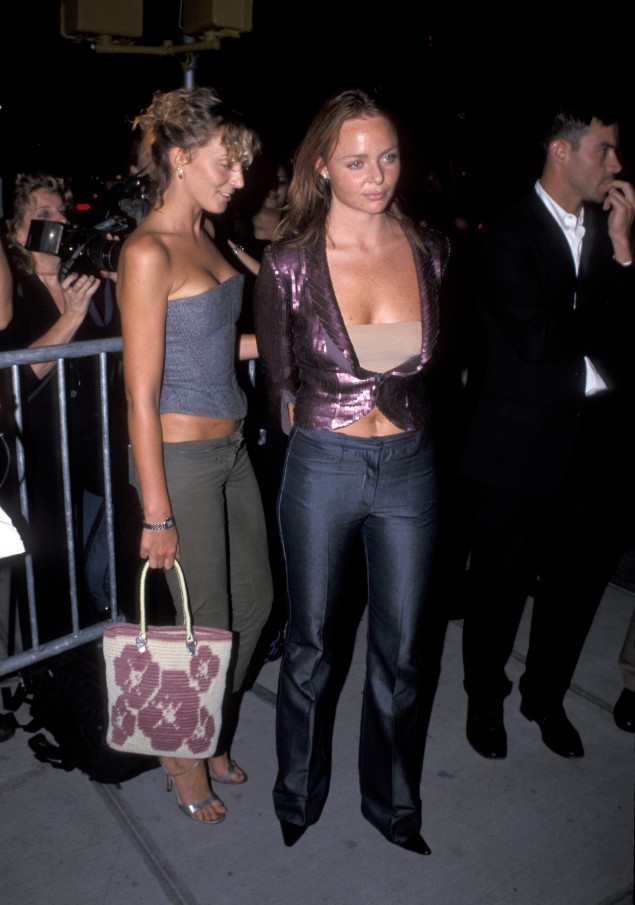 In 2001 she leaves Chloé (her friend and assistant Phoebe Philo will succeed her) to found her own label. Partner of the operation is the Gucci group (now Kering) which supports the designer in every step. The first show was in Paris in 2001. Among the audience, his father Paul McCartney and his old friends: Jude Law, Sadie Frost, Damien Hirst … Little by little he will create ready-to-wear lines for women and men, accessories, lingerie, swimwear, eyewear, perfumes and a baby line. 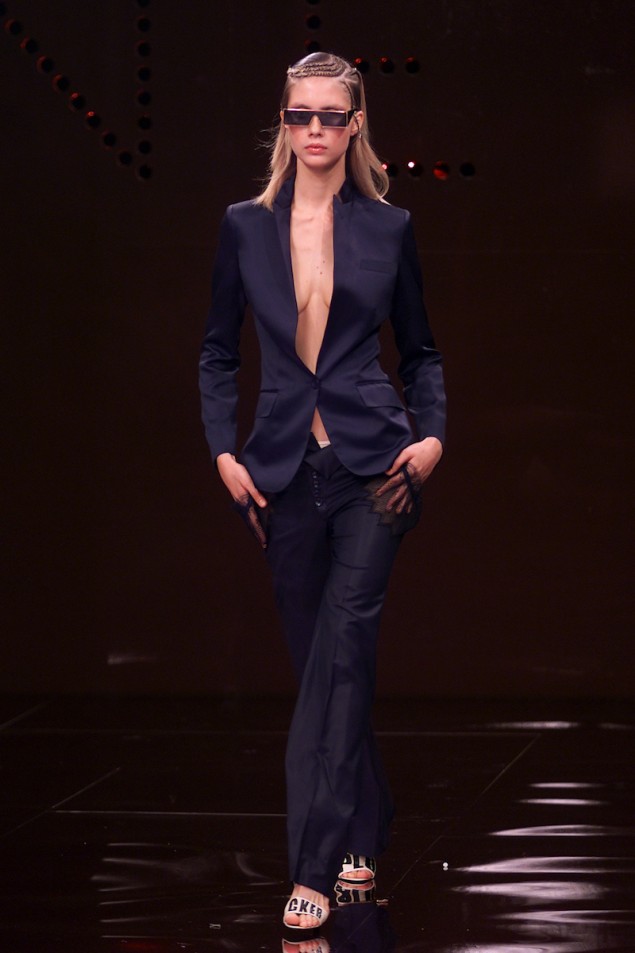 Stella became famous for her tailored and chic, designer and feminine garments. Following in the footsteps of her mother Linda, she is vegan and a staunch supporter of animal rights. Thus he decides, first of all, to imprint his label on cruelty free fashion. No leather, fur and feathers for her creations, but alternative and innovative materials. All materials from animals (such as wool) come only from certified farms that act in the welfare of the animals. It will be a pioneer in this field.

In 2007 she was named Designer of the Year at the British Style Awards. In 2011 she was named by TIME as one of the 100 most influential people in the world. In April 2018, after 17 years of partnering with the Gucci Group, McCartney bought her stake in the company and took full control of her empire. The following year, she signed a strategic partnership with LVMH, while maintaining the majority stake.

Stella conquers the whole of Hollywood with her simple yet surprising approach. In 2000 she designs the dresses for Madonna and Guy Ritchie’s wedding and in 2004 the pop star decides to rely on her for the 2004 Re-Invention tour. Actresses and singers compete to wear her creations on the red carpet. At the 2014 MET Gala, she hit the red carpet alongside Cara Delevingne, Rihanna, Kate Bosworth and Reese Witherspoon, all swathed in her creations. 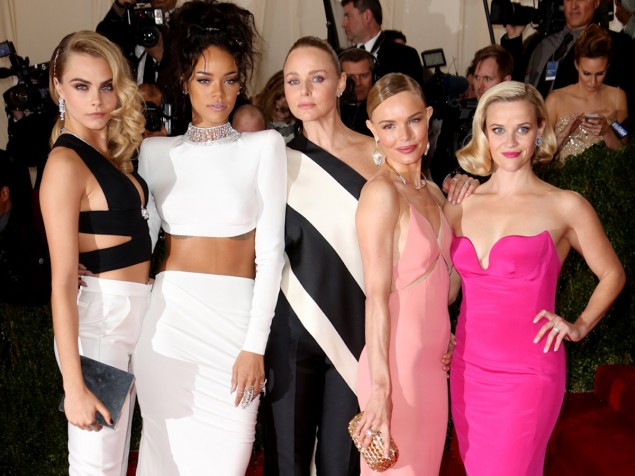 The MET Gala of 2014, from since. Cara Delevingne, Rihanna, Stella McCartney and Reese Witherspoon

Design Meghan Markle’s wedding reception dress. He later created 46 replicas (23 in white and 23 in black) for his capsule collection “Made With Love”. 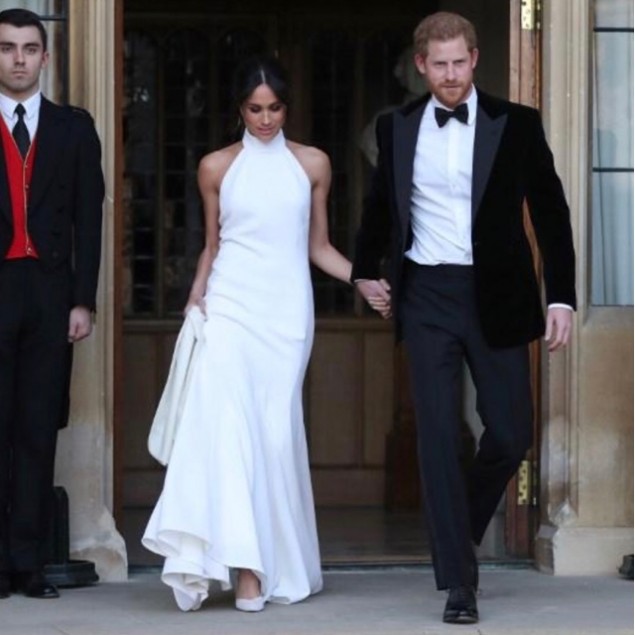 Meghan Markle in Stella McCartney on her wedding day in 2018

It bag: the Falabella

Stella McCartney’s flagship bag is the Falabella, name given in honor of Stella’s favorite horse breed. Born in winter 2009, when the designer decides to launch a luxurious non-leather bag. It is hand-sewn in Italy and decorated with an aluminum chain. The Falabella it bag was chosen by Stella McCartney in 2018 for the Fashioned from Nature exhibition at the Victoria and Albert Museum. It was the first prototype made in Mylo, a cutting-edge fabric derived from mushrooms.

The tissue that comes from fungi

Today the designer with the S / S 2022 collection finally showed on the catwalk the first bag in the world made of mycelium-based alternative leather, the Frayme Mylo. Developed by Bolt Threads through a state-of-the-art process that replicates the conditions under the forest floor within a vertical farming facility, the resulting bio-based material is soft, flexible and completely sustainable. 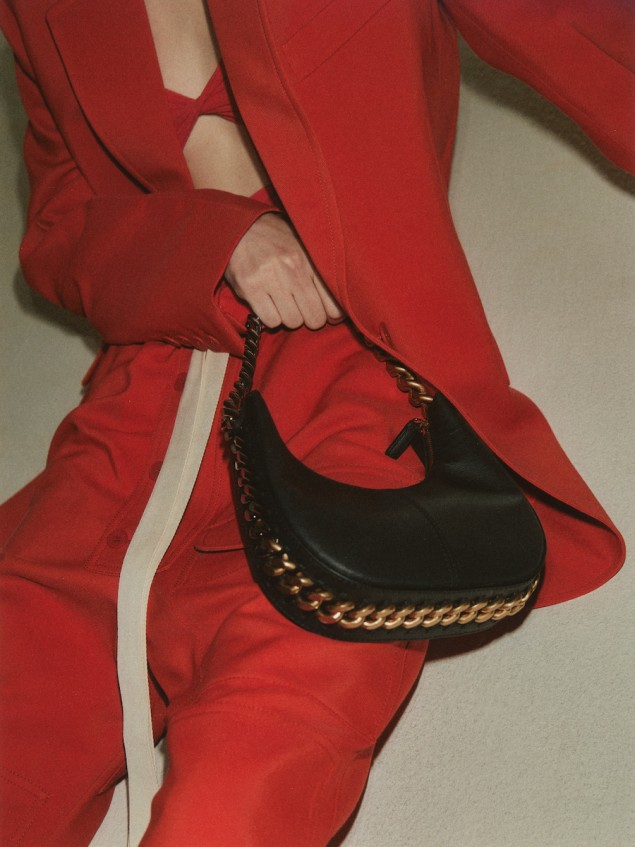 The entire Stella McCartney Spring Summer 2022 women’s collection was made of 63% eco-sustainable materials: recycled polyester and elastane, regenerated nylon, viscose from certified sources for forest protection and responsibly traced wool, as well as an innovative dye made with recycled materials.

Stella McCartney lives between Notting Hill in London and Worcestershire. In 2003 she married the creative director Alasdhair Willis with a ceremony on the Isle of Bute. She wears a dress designed by her and inspired by the one her mother wore for her wedding to Paul McCartney. Together they have four children: Miller, Bailey, Beckett and Reiley. 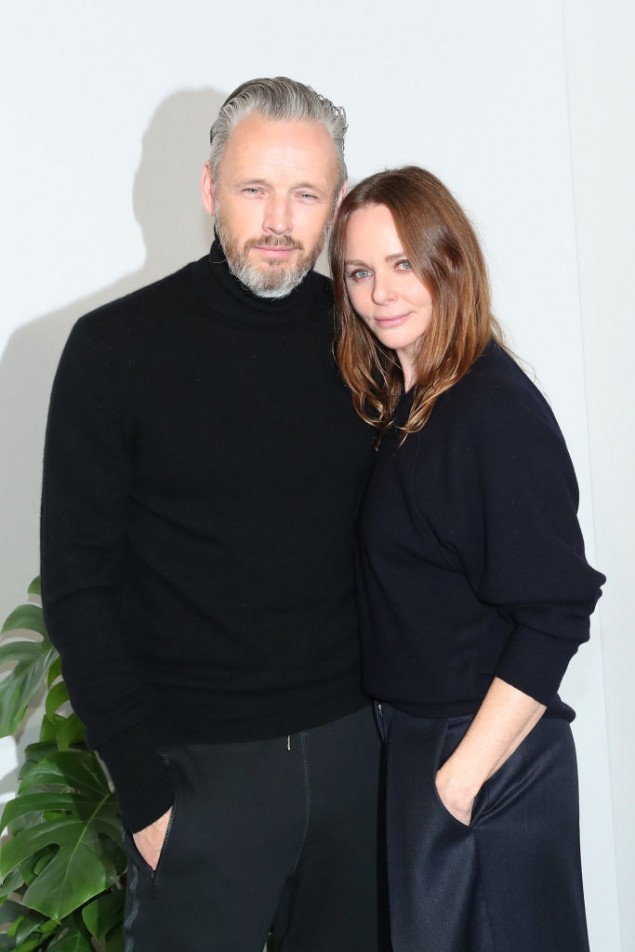 Collaborations: from Adidas to H&M

Loved by both the public and the fashion world, Stella McCartney is also in great demand by other brands. In 2004 he joined Adidas by establishing a long-term partnership with the company. For the sports brand, he will design garments for different sports every season. 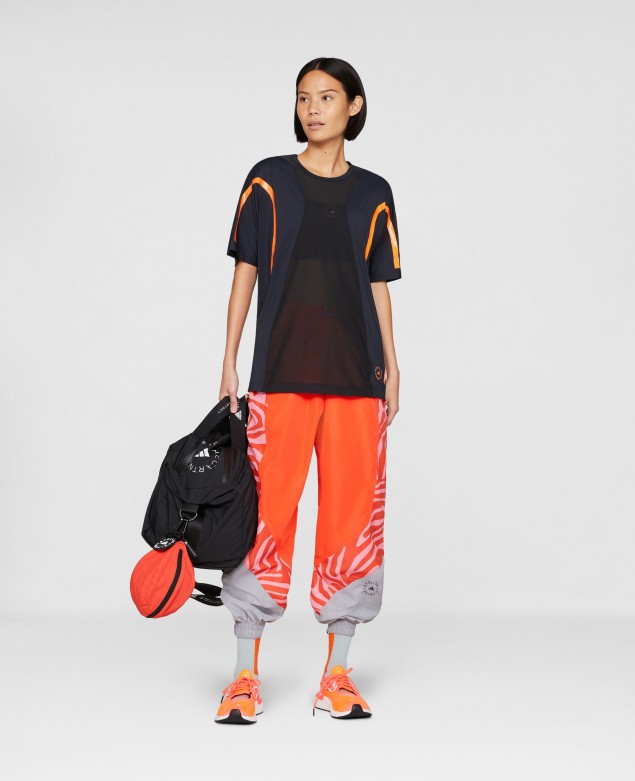 In May 2005 McCartney designs a capsule collection for H&M. The 40-piece collection is sold out immediately. In September 2010, she was appointed Creative Director of Team GB for the 2012 Olympics by Adidas, a role she also carries on in the 2016 Summer Olympics. In January 2010, she collaborated with Disney to create a jewelry collection inspired by Alice in the Land of Wonders. Collaboration that she resumes in 2022 on the occasion of World Women’s Day. The designer designs Minnie’s dress for Eurodisney Paris. In August 2019, American singer-songwriter Taylor Swift teamed up with Stella McCartney to release a fashion line inspired by the singer’s seventh album, Lover.

The Stella McCartney Cares Foundation was born on 15 October 2018, a charity dedicated to breast cancer (Stella McCartney’s mother Linda died of breast cancer in 1998). In December 2018, it announces the launch of a new Fashion Industry Charter for Climate Action, in partnership with the United Nations, to help fashion companies embrace sustainable business practices.