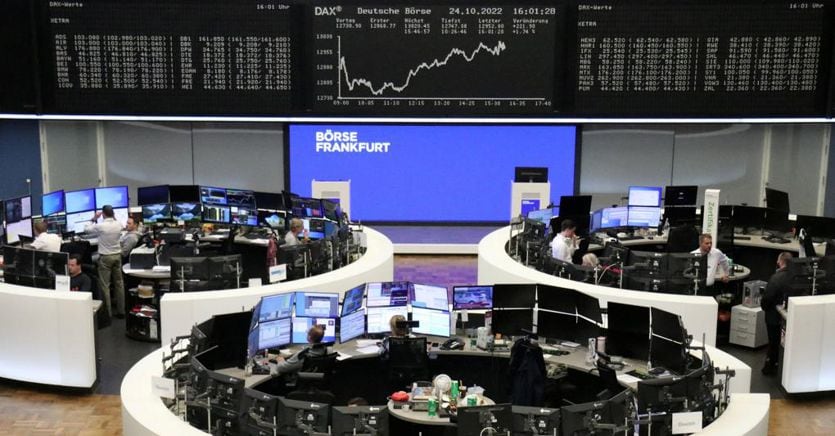 (Il Sole 24 Ore Radiocor) – European stock exchanges take the path of rise, together with Wall Street. In Europe, the wait is for meeting of the ECB on Thursday while in the US it is hoped that the Fed will slow down the pace of monetary tightening. Another fundamental market mover is the quarterly: a series of results that show a substantial resilience of corporate profits in the face of the crisis, albeit with some shadows. The numbers of Switzerland are better than expected Ubs but the first European bank, Hsbc, disappointed expectations with a 42% decline in earnings in the third quarter. In the USA, Coke celebrates the upward revision of the outlook e General Motors exceeded estimates, but 3M it had to file forecasts due to the impact of the dollar. Waiting for the numbers of Microsoft Corp and Alphabet, with the stock market closed.

Meanwhile, while on the geopolitical front the tension remains high in Ukraine, on the political one in Great Britain King Charles III has given Rishi Sunak the task of forming a new government. The new prime minister said he accepted the king’s invitation and was ready to work to “remedy the mistakes made previously.” In Italy, Prime Minister Giorgia Meloni presented her program to the Chamber to gain trust.

The European indices are therefore moving positively, starting with the FTSE MIB, and the CAC 40 in Paris, the DAX 40 in Frankfurt, the IBEX 35 in Madrid, the AEX in Amsterdam travel at alternating current. The only exception is the FT-SE 100 in London.

In Milan, focus on banks in view of the accounts

In Piazza Affari spotlight on banks, also in the wake of the accounts published by UBS (net profit down 24% for the third quarter, but better than expected, at 1.7 billion dollars). The Unicredit board of directors also meets to approve the quarterly report which will be published on Wednesday. A2a and Pirelli & C are doing well, while Saipem is sluggish. Among the smaller companies, Tod’s slipped below the takeover bid price of 40 euros, on the last day to join the operation launched by the Della Valle family who, together with Arnault, had control of 80% of the capital. Juventus Fc accuses a sharp decline after the decisions taken by the Turin prosecutor.

Vertical collapse for Banca Mps rights on the last trading day. The shares of the Sienese institute, on the other hand, are positive but remain below 2 euros. The € 2.5 billion equity operation began on October 17 and will end at the end of the month. The rights, however, will be negotiable until the end of the session on 25 October. The fresh vehicles will also be used by Rocca Salimbeni to finance the redundancy plan, which has already reached over 4 thousand one hundred adhesions compared to the initial target of around 3,500 exits.

The variety offered by video games never ceases to amaze him. He loves OutRun's drifting as well as the contemplative walks of Dear Esther. Immersing himself in other worlds is an incomparable feeling for him: he understood it by playing for the first time in Shenmue.
Previous Microsoft’s nonsense choice: they have a great Surface Mini and only sell it to developers
Next Inter, Inzaghi: ‘Skriniar? I hope it resolves quickly, but it is not the only one when it expires. Lukaku summoned, Brozovic … ‘| First page