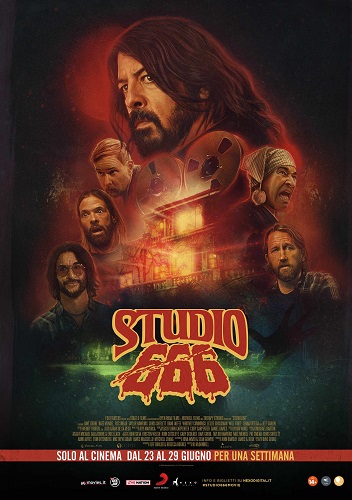 MILAN – From 23 to 26 June in the multiplexes of the UCI Cinemas Circuit Study 666the horror comedy released by Nexo Digital and based on a story by Dave Grohl, with a screenplay by Jeff Buhler and Rebecca Hughes and directed by BJ McDonnell.

In Study 666, to record their long-awaited tenth album, the legendary rock band the Foo Fighters moves to Encino, California, to a mansion steeped in the macabre history of rock and roll. Here, in fact, decades earlier, a demon-possessed rocker went too far, coming into contact with dark forces. Once in that house, Dave Grohl also finds himself struggling with writer’s block and supernatural forces that threaten the completion of the record and the very existence of the band … That’s it, all the Foo Fighters – bassist Nate Mendel, the guitarist Pat Smear, drummer Taylor Hawkins, lead guitarist Chris Shiflett and keyboardist Rami Jaffee – will try to stop the dark curse that is falling on Dave and them …

STUDIO 666 brings the Foo Fighters, who in 2021 were inducted into the Rock & Roll Hall of Fame, into the world of feature films with a horror comedy that is based on the creative attitude and anarchic playfulness that the band has always included in its music videos , combined with the innovative and overwhelming flair of director Bj Mcdonnell, who met the Foo Fighters for the first time while working on the video for the Grammy-winning song “Run”, where the Foos played wild old men.

John Carpenter, director, screenwriter and composer famous for his horror masterpieces, was the spiritual godfather of STUDIO 666, in terms of images, energy and sound. It’s just a “perfect John Carpenter sound” theme that kicks off the film, accompanying it through a spooky and playful soundtrack, courtesy of Ministry drummer Roy Mayorga.

At UCI Casoria, UCI Cinepolis Marcianise and UCI Molfetta the cost of the ticket is 10 euros for the whole and 8 euros for the reduced. In the remaining multiplexes it is 11 euros for the whole and 9 euros for the reduced. Tickets can be purchased at the ticket offices of the multiplexes involved, via the free UCI Cinemas App for Apple and Android devices and on the website www.ucicinemas.it. Paper-less tickets purchased through the App and electronic tickets purchased through the website allow you to avoid queuing at the cash desks with –FILA + FILM. However, the public can also purchase tickets through the call center (892,960) and the self-service ticket machines on site. The ticket will be nominative if purchased online, while a register of names of customers is required at the ticket offices, as per regulation. For more information, visit the website www.ucicinemas.it or the official UCI Cinemas Facebook page at: www.facebook.com/ucicinemasitalia. Alternatively, contact the call center at 892.960.

In all UCI multiplexes, new safety protocols have been introduced to safeguard the health and well-being of all the public and staff. Special measures have also been adopted to ensure that the journey inside the cinema can take place without any kind of direct contact and finally the cleaning procedures have been enhanced, with more regular interventions. For further information on security protocols visit the website: www.ucicinemas.it/siamocinemapiusicuri.

The ODEON Cinemas Group is the most important European cinema circuit and belongs to the company AMC Entertainment Holdings. In Italy it is present with the UCI CINEMAS Circuit, leader in the national territory with 41 multiplex structures and a total of 419 screens.

David Martin is the lead editor for Spark Chronicles. David has been working as a freelance journalist.
Previous Thor: Love and Thunder | Jane tests her powers in new scene; watch
Next Cristiano Ronaldo at… Botafogo?? – Football in the Vein