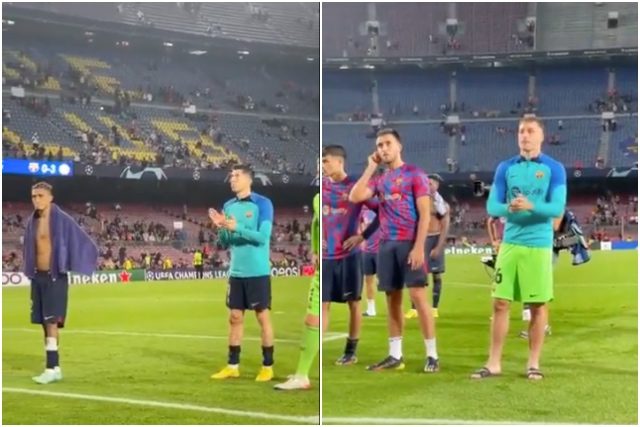 surprise return from the changing rooms

Barcelona is out of the Champions League and after the 3-0 knockout against Bayern returns to the locker room with his head down. The fans thus decide to recall the team to get it back on the pitch and raise it up by making a gesture that hits Xavi’s men.

The Barcelona failed to reach the minimum goal requested by the club for the Catalans to be able to hit the round of 16 of the Champions League. In fact, the third place in the group was already certain even before the Blaugrana played against Bayer. Inter’s victory over Viktoria Plzen had in fact already blocked the way for Barcelona then at the Camp Nou he was nevertheless folded 3-0 by Bayern Munich. Xavi’s team has 4 points in the standings and is already sure, with a day to spare, to play at least the Europa League. A goal that now becomes a priority for the ambitions and the emblem of Barcelona but also for the club.

Laporta was counting heavily on the income that a qualification to the second round would bring to the blaugrana’s coffers. Barcelona’s economic problems have long been known and the Catalan club had to do everything to make ends meet. In any case, Xavi can still count on a roster of respectable players and for this he has a duty to finish this season in the best possible way. A request made explicitly also by the same Barcelona fans who at the end of the match saw the team leave the green rectangle disappointed, with their heads down. That’s why they were called back to the locker room to return to the pitch.

A club delegation has been notified by the Gol Nord supporters of recall the players who had recently returned to the locker room. Seeing them head out of the green rectangle was too hard a blow to swallow. That’s why they thought of bringing out someone to recharge them with choirs, songs and flags, so that they look forward and better prepare the second phase of the season to play at their best between La Liga and the Europa League. Some players have returned to the field in slippersothers with thetowel on the back or simply without a shirt or with a training sweatshirt.

The English commentators go crazy at the expulsion of Inzaghi against Barcelona: “Spiaze!”

Among them there was also Robert Lewandowski which was immortalized by the images circulated on the net after the match and published by some fans who still remained in the stands of the Camp Nou. The Polish striker was in the front row, still with his shoes on, while he actively participated, clapping his hands, in the choirs of his fans, greatly appreciating their gesture of wanting immediately raise the morale of the players.

Barcelona from 4 October to today, or from 1-0 defeat at Inter Milan through the knockout in the Clasico against Real and the pyrotechnic 3-3 in the second leg against the Nerazzurri, he spent weeks that were difficult to say the least, which led him out of the Champions League in a few days and -3 from the Merengues first in Liga with 31 points. A not huge delay for a season that Xavi can still straighten out by betting everything on the Europa League and on the possibility of nibbling points at Real while waiting for the Clasico at the Camp Nou which could then mean overtaking the reigning European champions.

David Martin is the lead editor for Spark Chronicles. David has been working as a freelance journalist.
Previous The Handmaid’s Tale 5: Elisabeth Moss anticipates new episodes will be eventful | TV
Next Brindisi, a 15-year-old girl dies at the Perrino hospital: she arrived with a severe headache