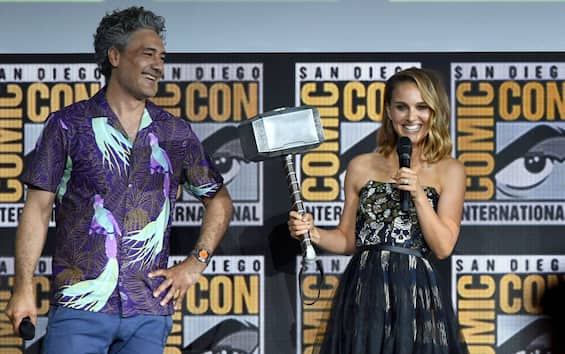 The actress will once again play the role of Jane Foster, but will have a more adventurous part

The character played by Natalie Portman in Thor: Love and Thunder, Jane Foster, it will be much more fun as well will play a crucial role in the new chapter of the saga. These are the words of the director, Taika Waititi, during an interview with Empire magazine. The artist further stated that Portman, in the guise of the superheroine Mighty Thor, will offer viewers a new point of view. His character, therefore, grows up and engages in something unexpected. “Natalie will no longer be the scientist who walks around with the tools of the trade. – said the director – “While Thor was grappling with his superhero life, she stayed on Earth, waiting to be able to see him again. All of this had become boring. Natalie will be part of the adventure from now on, after all, that’s what we all wanted. “

Thor: Love and Thunder, released a new poster of the film

We are used to seeing the beautiful and talented Portman in always busy or rather serious roles. In Thor: Love and Thunderalso thanks to Waititi’s sense of humor, the actress will reveal a comic part of herself. “Natalie is a very funny girl. She is also a bit funny and has a great sense of humor. I don’t think any of this has ever really been understood in previous films. ” Said the director.

The move to include the character of Mighty Thor was quite unexpected for everyone: “I didn’t know in any way where we were going to bring up Mighty Thor in the script, until we started working. I was writing and, at a certain point, I thought: wouldn’t it be nice to bring Jane back? “

It’s been eight years since Jane and Thor last met. This could be a big challenge for the muscular superhero. “She has lived another life and he sees her return, but this time she is dressed like him. Thor will literally go out of his mind.“

The training needed to become a superheroine

Thor: Love and Thunder, Natalie Portman transformed in the photos from the set

In an interview with Vanity Fair, Natalie Portman explained the hard training she went through to become Mighty Thor. “It was a lot of fun – said the actress – I was followed by a personal trainer, Naomi Pendergast, for four months before starting shooting. I did a lot of weight lifting and drank an industrial amount of protein shakes. I had never lifted all those loads in my life. All of this helped me get into the part and changed the way I move. I feel stronger than ever.“

Natalie Portman, from Thor to Black Swan: her most iconic films

Born on June 9, 1981, the actress, aged 40, has collected an Oscar and two Golden Globes. After her film debut, at the age of 13, in Luc Besson’s masterpiece, Léon, she starred in the films of important directors such as Woody Allen, Terrence Malick and Darren Aronofsky

Natalie Portman is one of the most acclaimed actress, director and film producer in Hollywood. She was born on 9 June 1981, a 40 years has collected numerous awards with unforgettable interpretations. Her career in the world of cinema began at a very young age, at 13, in the masterpiece film Léon by Luc Besson with Jean Reno

After Léonwork with directors such as Woody Allen, Micheal Mann and Tim Burton. She is very careful in choosing the parts, she rejects films like Lolita and Romeo + Juliet because she considers them with scenes that are too strong and not suitable for her age. In 1999 she plays Ann August in My lovely enemy by Wayne Wang. The director asked her to shoot a sex scene and she threatened to leave. Susan Sarandon intervened and changed the director’s mind by threatening to leave the set as well

Also in 1999, she plays Queen Amidala in Star Wars: Episode I – The Phantom Menace, by George Lucas, a film that earned her immediate success. She will then also take part in the next two chapters of the Star Wars trilogy