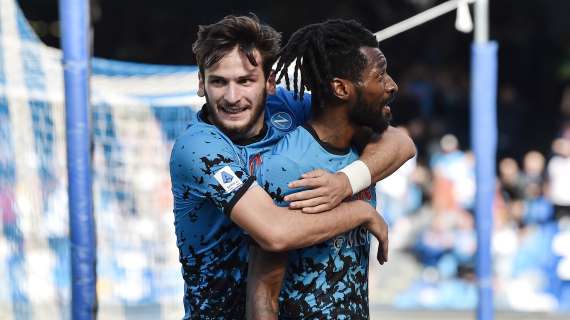 temptation Anguissa, the doubt on the left resists

The championship is back and in advance Napoli aims to extend the incredible streak of consecutive victories to 13 and at least keep the distance on the pursuers. At Maradona – still sold-out and full of enthusiasm – comes Sassuolo who in recent years has always played some bad tricks (often away from home, but on occasion also in Fuorigrotta). Dionisi’s team can be considered to be in great growth: after the victories over Turin and Salernitana, he lost a very balanced match against Atalanta and Inter and has just returned from home success over Verona which brought him back to the left side of the standings and returned. that basic serenity to face the top-ranked teams even with carefree: “We respect Napoli very much, we must have a pinch of presumption / ambition to think about going there and obtaining a positive result. We will try to put Napoli in difficulty – which now he is almost unplayable and he is achieving these results with games, ideas, organization – trying not to distort us and going there not to celebrate Napoli but to try to play a joke on him “, the words of Dionisi in conference on the spirit of his team.

Statistics – By holding the ball, Sassuolo manages to limit the defensive suffering: Napoli (28) and neroverdi (30) are in fact two of the three teams in this Serie A to have so far collected fewer conclusions in the face of goal. Napoli are unbeaten in 15 Serie A matches (13V, 2N), the longest open streak among Serie A formations: the Neapolitans started this unbeaten series against Sassuolo, thanks to the 6-1 on 30 April last. . With the defeat of Atalanta, Napoli remains the only team still unbeaten in this Serie A: expanding to the five major European leagues, like the Azzurri only Paris Saint-Germain and Real Madrid.

The latest on Napoli
Spalletti raises all the players saved with Rangers, but two ballots resist: Juan Jesus returns with Kim in defense, Di Lorenzo on the right and Olivera on the left is played for the place with Mario Rui. In the median with Lobotka Zielinski returns and Anguissa could also be there from the first minute. In attack totally fresh trident with Kvaratskhelia, Osimhen and Lozano.

The latest on Sassuolo
Dionisi without Berardi, Defrel and Muldur and should confirm the trident with the Neapolitan D’Andrea, Pinamonti and the talented Laurienté. In the median there is no doubt about Frattesi, Maxime Lopez and Thorstvedt while captain Ferrari is back in defense paired with Erlic and the side should be Toljan and Rogerio (slightly ahead of Kyriakopulos).

WHERE TO FOLLOW IT – Live TV on DAZN and live radio on Kiss Kiss Napoli. Live text with extensive pre and post game on Tuttonapoli.net

David Martin is the lead editor for Spark Chronicles. David has been working as a freelance journalist.
Previous Oltre RC deflectors are illegal for the UCI. Bianchi’s answers
Next “A Russian drone has aimed at us, we have a problem”. The escape from the missile told live by the Italian journalist in Ukraine