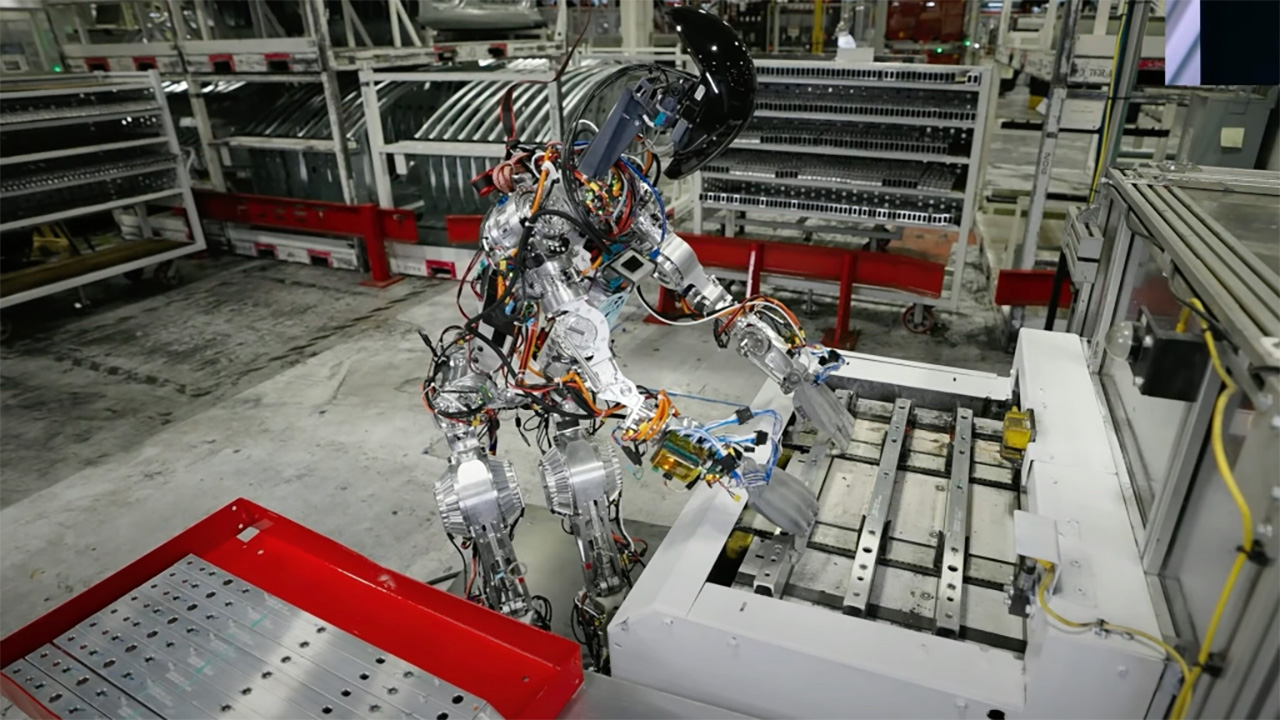 Elon Musk has unveiled a prototype of humanoid robot on the occasion of Tesla’s AI Day 2022. Is called Optimus and stems from the artificial intelligence technologies that the company has already developed with its cars, including software and sensors delegated to driver assistance services and Autopilot functionality. The project was unveiled last year, but now Tesla has shown more than just words.

During the event a less refined version of Optimus was shown, called Bumble C, able to move on stage, take a dance step and greet the audience. It was the first time that a Tesla humanoid robot has performed actions in public without any connection, and Musk himself admitted that he wanted to use a precautionary approach so as not to make him make too many movements and make him “fall to the ground” in a ruinous way .

Later, short videos were shown in which the robot performed some useful operations in the factory, such as collecting boxes, and more.

Tesla Bot, between dystopia and reality: a humanoid robot that will replace human work

Only at the end was a “very close to production” version of Optimus shown, with the aesthetic components assembled but not yet fully functional. Optimus was kept standing on a stand and was able to greet the audience, showing the range of motion possible with his hand. The version shown of the humanoid robot still cannot walk on its legs, but inside it integrates actuators, battery and all the necessary hardware for operation in the field. Optimus will be able to do much more once completedMusk specified, but at AI Day 2022 he operated on a stage for the first time without the need for connections of any kind.

We have already seen other humanoid robots perform quite scenic moves and pirouettes, and in fact Optimus hasn’t really blown away from this point of view. Where Elon Musk surprises, however, once again on feasibility of the project in mass volumes: the price of the finished product could in fact be “less than $ 20,000” and, thanks to the use of technologies already in use on Tesla cars, the robot could be produced in large volumes, in the order of “millions of units”. It will not be like the “other awesome robots” shown by other teams previously, but it will be relatively simple to build and still be able to perform various types of operations.

The first prototype shown, Bumble C, was the result of six months’ work: it adopts a 2.3kWh battery and the calculation operations are performed through a Tesla SoC being able to have Wi-Fi and LTE connectivity. During the demos it was shown how the system processed the data for each joint, of the movements of the hands, wrists or knees, using however a limited number of actuators. The “biologically inspired” design of the hands has been made so that they can be useful for collecting objects of various shapes and sizes. The Autopilot software was taken from Tesla cars and optimized to work on a different body and with different purposes, being able to replicate the operations performed by humans by learning from them.

“It will be a fundamental transformation for civilization”Musk suggested, with Optimus aiming to improve economic output “by two orders of magnitude.” Tesla’s CEO also pointed out that his humanoid robot represents “the most important product development” of this year, and in the short term his contribution could improve production yields on the company’s assembly lines. In the future, Tesla’s robot could be optimized for cooking, gardening and other activities, with Tesla becoming the only company capable of replacing human labor in the near future, despite its robot not yet able to run or skip, like other prototypes that have been shown by other development teams.

Not all of Musk’s announcements have materialized in ready-made and finished products for the public, and also in terms of timing, Tesla’s CEO has not always been on time. Having seen a prototype of the Tesla Bot working on stage, however, lights up hopes, with Musk’s promise that that of transform Tesla into the “largest robotics company in the world”. In short, something is really moving.

The variety offered by video games never ceases to amaze him. He loves OutRun's drifting as well as the contemplative walks of Dear Esther. Immersing himself in other worlds is an incomparable feeling for him: he understood it by playing for the first time in Shenmue.
Previous The trial of Johnny Depp and Amber Heard is also on Un Giorno in the Magistrate’s Court
Next “I’m very happy with the team’s performance”